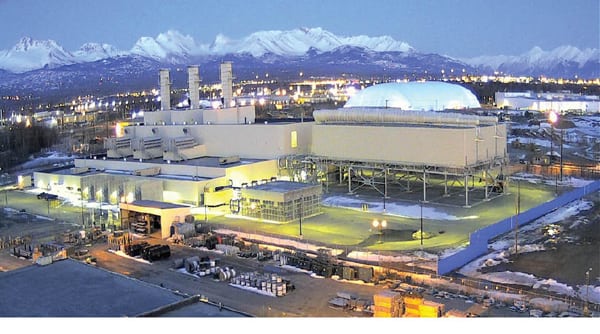 The Southcentral Power Project is Alaska’s third-largest power plant and its most fuel-efficient. By employing a high-efficiency, one-button-start combined cycle design, the plant owners wisely use the region’s limited supply of natural gas while also reducing fuel cost and air emissions.

Alaska’s vast land mass broken up by mountainous regions and glacier fields does not allow for a tightly woven system of power transmission and distribution often taken for granted in the Lower 48. Many utilities in the Last Frontier often serve regions or communities without interconnection with other utilities that can provide backup power during outages that can quickly become life-threatening. The same can be said for the state’s natural gas pipeline network.

Chugach Electric Association Inc. (Chugach) is the largest cooperative utility in Alaska. Based in Anchorage, the utility provides wholesale and retail power to customers in southcentral Alaska, from the Kenai Peninsula to the south and as far north as Fairbanks. Anchorage Municipal Power & Light (MP&L) provides service to commercial and industrial customers in downtown Anchorage and to the north toward the Matanuska Valley. Platforms and drill sites located in and around the Cook Inlet produce the natural gas used to fuel their power plants.

Natural gas is the primary fuel for electricity production in southcentral Alaska. The most pressing concern for utilities in the region is an assured supply of natural gas, particularly during the cold and dark winter nights. Well depletion in the Cook Inlet and the limited interest of large gas companies to invest in new wells only increases the risk of dwindling supplies in the future. Also, upstream outages have caused disruption of natural gas deliveries in the past. The only options available to these geographically isolated utilities were to store natural gas to mitigate the effect of an upstream outage or peak usage, build a new pipeline to supply current and anticipated needs, import gas, and/or use the gas available today more efficiently. Chugach and ML&P have completed the two tasks that are under their control.

A consortium of energy companies, including Chugach and ML&P, added gas storage to their system by repurposing a depleted natural gas reservoir on the Kenai Peninsula in April 2012. The Cook Inlet Natural Gas Storage Alaska (CINGSA) provided gas during several cold days last December when local demand exceeded what the gas wells could provide.

Constructing a new gas pipeline from the North Slope to Anchorage has been the subject of contentious debate in the state since the 1970s, when the Trans-Alaska Pipeline System was constructed. Alaska has enormous volumes of natural gas in the frozen North Slope, but it’s very expensive to get the gas to market. Legislators in May 2013 approved funding for the development of two pipeline options to bring North Slope gas to southcentral Alaska by 2020.

The third option is to use the available gas more efficiently. In response to the gas crunch, Chugach began planning for a new, high-efficiency combined cycle plant in 2004, now known as the Southcentral Power Project (SPP). The best location for the new plant was determined to be on Chugach property adjacent to the Ted Stevens Anchorage International Airport.

Chugach (70%, and managing participant) and ML&P (30%) formed a participants agreement in 2008 to jointly own SPP with a budget of $369 million. The new 183-MW plant (200 MW with duct firing) was sized to replace baseload generation provided by the 1970s vintage Beluga combined cycle Units 6, 7, and 8 (218 MW total). The increased efficiency of SPP reduces the amount of natural gas consumed by 25%, which translates into roughly a $2 million-per-month reduction in the cost of fuel.

Once the participants approved the project, Chugach retained the San Francisco office of Parsons Brinkerhoff (PB) as the owner’s engineer. PB assisted Chugach in preparing the turnkey contractor bid documents and purchased equipment specifications. After competitive bids were evaluated, an engineering-procurement-construction (EPC) contract was signed by SNC-Lavalin on June 20, 2010, with a June 30, 2013, project completion date.

The official groundbreaking was held in March 2011, although grading and other site preparation work was completed in late 2010 to prepare for the 2011 construction season. Construction was mobilized concurrently with groundbreaking the following spring, with priority given to placing the power block and the enclosed building around it so construction could continue indoors during the winter months. Substantial completion of the project was reached on Jan. 19, 2013, and the plant was placed into commercial service on Feb. 1, 2013, five months early and $2 million under budget.

One means used by Chugach to accelerate the schedule was to direct purchase the three General Electric (GE) LM6000PF combustion turbines (CTs), the three once-through steam generators (OTSG) manufactured by IST, and a 57-MW steam turbine from Mitsubishi Power Systems Americas in advance of the EPC contract. By doing so, Chugach assumed the performance risk for the 3 x 1 combined cycle project (balanced with the commensurate cost savings), but cost and completion risk remained with SNC-Lavalin. Provisions for a fourth CT, such as electrical and piping tie-in points, were included as part of the original design.

The aeroderivative LM6000PF, nominally rated at 48 MW, was selected for its high efficiency, operational flexibility, and ability to rapidly respond to grid frequency disturbances. The CT is able to reach full generating capacity in 10 minutes with guaranteed 15 ppm NOx and 25 ppm CO emissions from its dry low-emissions combustion system design. The CT also has a Power Boost capability that allows operation of each CT up to 2 MW over its full power rating in the event of a grid disturbance (Figure 1). The steam turbine rating was selected to handle the steam flow produced by a future fourth CT without duct firing the OTSGs. In the meantime, duct firing two of the three OTSGs will produce maximum steam turbine output for peak load purposes. The official plant rating is 182.5 MW with a heat rate of 6,382 Btu/kWh (LHV) at an average annual ambient temperature of 36F.

The plant’s operational flexibility was considerably improved by using IST’s once-through steam generator technology. The boilers are constructed of stainless steel and Inconel tubes that can be operated dry at 100% CT load, should the need arise, and restarted with hot tubes. This design also eliminates the expense, space, and efficiency losses of a bypass damper and stack. In addition, the condensers are sized to accept 100% steam dump should the steam turbine trip. This capability allows the steam turbine to be immediately restarted and restored to full load without disrupting operation of the steam plant or the CTs.

Also included within each OTSG were selective catalytic reduction (using 29% aqueous ammonia) and CO catalysts to further reduce emissions. Today, the plant operates with 11 ppm NOx from the CT and 4.5 ppm from the boiler stack.

An air-cooled condenser was supplied by GEA Rainey, along with an air-cooled heat exchanger from GEA Rainey that provides cooling via an intermediate closed-loop glycol/water system. Proper water treatment for the OTSGs is essential. A two-stage reverse osmosis system eliminated the need for onsite resin regeneration and bulk chemical storage. Two crushed resin polishers, each sized for 100% of flow, continuously protect Inconel tubes in the OTSGs by minimizing potential contamination.

Plant supervisory controls were provided by Emerson Process Management’s Ovation distributed control system. The entire plant is interfaced to the Chugach Dispatch Center through SCADA with full automatic generation control capability. The plant has very high levels of automation and operates 24/7 with only two operators per shift and a small maintenance staff. A single pushbutton initiates OTSG startup and brings them to full load, at which time operators bring the steam turbine online. A black-start standby generator enables the plant to independently restart in the event of a systemwide outage.

The harsh Alaskan winter conditions that can last over six months a year necessitated special measures in both plant design and construction. For example, all building maintenance access points include roll-up doors, and large trucks can reach all the CTs via a drive-through passage. Also, each end of the CT power train can be accessed through roll-up doors, and each OTSG can be accessed through removable building panels located at each end for repairs or catalyst changes.

By building a plant with a very high degree of operating flexibility and the most efficient power plant in Alaska, and by taking significant steps to solve the region’s gas supply problems, Chugach and MP&L have made Southcentral Power Project a POWER Top Plant. ■