Concentrating solar power has found a partner in thermal storage, but costs remain high. Solar photovoltaic generation may have a partner in rapidly expanding battery options, but the economics are uncertain. Is there room for both approaches, or will one be crowded out?

Once a subject of concern largely only to utility engineers and energy wonks, prospects for storing renewable energy on the grid leapt into the public consciousness in early May thanks to electric vehicle firm Tesla Motors and its charismatic CEO Elon Musk.

Late in the evening on April 30—in a lavish ceremony at Tesla’s Design Studio in Los Angeles that was also streamed live on the web— Musk unveiled two products that, he said, were intended to begin “the complete transformation of the entire energy structure of the world”: a home-based lithium-ion battery system called the Powerwall (in 7-kWh and 10-kWh versions), and a utility-scale battery called the Powerpack (100 kWh, scalable up to 1 GWh, Figure 1). 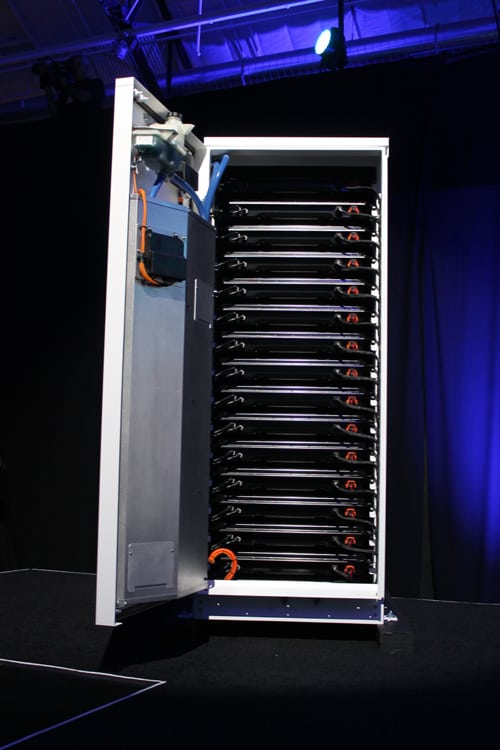 The announcement came with a showy flourish. After introducing the batteries and discussing what he hoped to accomplish with them, Musk had one more surprise for the audience: Tesla Powerpacks were running the whole party. “This entire night, everything you’re experiencing, is stored sunlight,” he said proudly. The news was greeted by a sustained cheer from the hundreds of people in attendance.

Musk’s lofty rhetoric aside, the power sector has been storing sunlight for several years already, but through a different method, one that is already operating at grid scale: concentrating solar power (CSP) with thermal storage.

The first CSP plant to incorporate thermal storage, Andasol in Spain, came online in 2008. The initial 50-MW plant has since been expanded with two additional phases to 150 MW, each of which can store about 7.5 hours of energy.

According to the National Renewable Energy Laboratory database, there are approximately 20 operational CSP plants larger than 10 MW employing some degree of thermal storage worldwide (counting multiple phases on the same site as one plant). Most are in Spain, though the largest, the 280-MW Solana Generating Station (a 2014 POWER Top Plant), is in Arizona. A typical plant can store around 5 to 7 hours of energy, though the newest plants, such as the 110-MW Crescent Dunes CSP plant in Nevada, are capable of storing 10 hours or more (Figure 2). 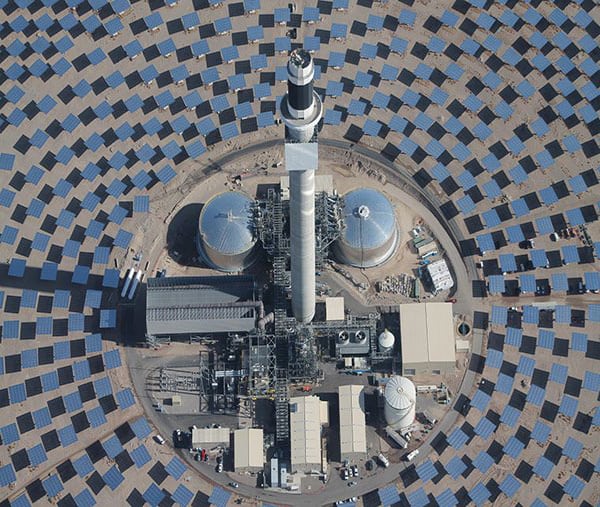 Though large solar plants that can supply power around the clock are the long-term dream, even a few hours of storage can make a major difference in a plant’s performance. The key factor is that a solar plant without storage is going offline just as evening demand begins ramping up; the same plant with five hours of storage can continue supplying power until evening demand has dropped off. The Solana plant, with 6 hours of storage, can achieve a 38% capacity factor, compared to around 25% for a comparable solar photovoltaic (PV) plant.

CSP plants with thermal storage, however, are expensive: The Solana plant cost $2 billion. CSP plants in general are costly, but how much thermal energy storage adds to the bottom line depends on the approach used. For a parabolic trough plant like Solana, where a heat transfer fluid collects the thermal energy and transfers it to molten salt for storage, adding storage capacity represents a significant increase in cost and complexity because an entirely separate fluid system is being added.

A solar tower CSP plant such as the 20-MW Gemasolar plant in Spain, however, can heat the molten salt directly, and for these plants, the cost of adding storage is largely negligible for plants of comparable capacity. This is offset by the fact that power tower–based plants are more expensive than parabolic trough plants.

Competition on the Way?

Though its use for solar thermal energy storage is new, molten salt is a mature technology that has been used in other sectors for decades. That’s good because it comes with an extensive operating history, but it also means future avenues for cost reductions are limited.

That fact could open the door for batteries and solar PV, which have seen dramatic reductions in costs over the past decade and are expected to continue enjoying further cost reductions across the supply chain, especially in manufacturing. Tesla in particular is seeking to cut the cost of li-ion batteries substantially through its large-scale “Gigafactory” under construction near Reno, Nev. (see “Batteries are Carving Out Space on the Grid,” in the May 2015 issue).

Solar PV already beats CSP in installed capacity costs, a fact that has slowed CSP development in recent years. Depending on the size of the plant and other factors, installed costs for PV are now roughly half that of CSP. The 550-MW Topaz Solar PV plant, for example, which came online in San Luis Obispo, Calif., in December, cost only slightly more to build than Solana at $2.5 billion, despite doubling its capacity. PV plants are also easier to site, have much less complex operation and maintenance (O&M) requirements, and come with fewer environmental implications because they require no water for cooling.

Topaz Solar’s projected capacity factor, however, is only 23%, since it has no storage. Also unlike Solana, its power is not dispatchable. Those factors tip the balance back toward CSP with storage, though PV still generally enjoys a lower levelized cost of energy (LCOE) across its lifetime.

But what if large-scale battery storage could be paired with solar PV? Wind farms, after all, are already beginning to deploy tens-of-megawatt-scale battery storage facilities for power smoothing and time-shifting. Could plants like Topaz Solar operate like Solana, supplying dispatchable power well into the evening hours at economic rates?

At the moment, the answer is no. A September 2014 analysis by consulting firm Lazard estimates that the unsubsidized LCOE for battery storage (all technologies, not just li-ion) remains well above that for CSP with storage, at $265/MWh to $324/MWh versus $118/MWh to $130/MWh.

CSP with storage currently has a large lead in deployed systems. The Crescent Dunes plant, with its 10 hours of thermal storage, can supply 1.1 GWh of generation when the sun isn’t shining. No one has yet built—or even planned—a battery storage system anywhere near that big, meaning the costs and O&M requirements for such a large project are uncertain (Figure 3). The largest storage system currently in development is Southern California Edison’s 100-MW, 400-MWh system it has ordered from AES Energy Storage, to be built at the Alamitos Energy Center in Long Beach by 2020. And that system is designed more for grid support than for the sort of time-shifting that would give a large PV plant dispatchable power. 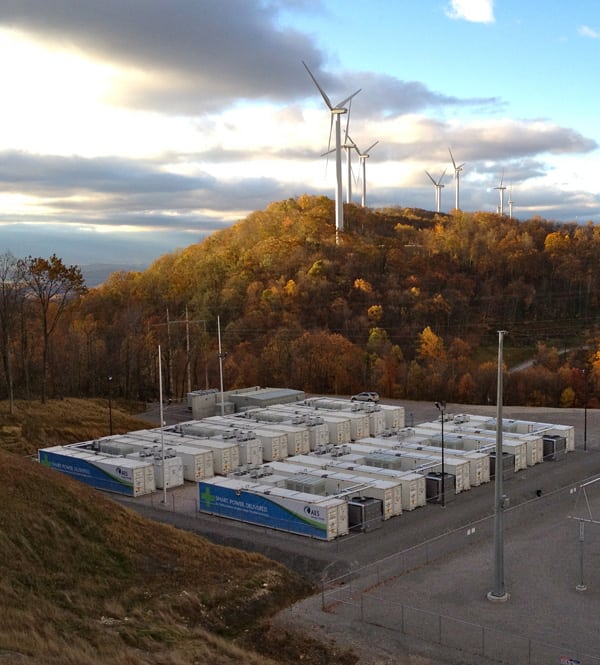 3.              Playing catch-up. The largest deployed battery systems in operation are currently in tens-of-megawatt capacities, such as AES Energy Storage’s 32-MW Laurel Mountain facility in West Virginia. While such systems have been combined with wind farms, they have yet to see similar deployment alongside large solar photovoltaic plants. Most of these systems are also used primarily for smoothing output rather than time-shifting. Courtesy: AES Energy Storage

Battery costs, however, are falling rapidly as manufacturing capacity expands. Tesla plans to market the Powercell for $250/kWh, a substantial decrease from just a few years ago (though this figure does not include installation and other costs). Another report from Lux Research predicts that Tesla and other leading manufacturers could potentially lower capital costs for li-ion batteries to under $175/kWh by 2025. The Lux report suggests that a fully installed grid-scale system could be built for around $500/kWh, which would represent a 50% decrease from current figures, with AES now marketing its turnkey Advancion system for around $1,000/kWh.

Though much of the attention—and market activity—has centered around li-ion batteries, costs for flow batteries, which are typically better suited for time-shifting, are also falling, with prices already under $200/kWh.

Meanwhile, the Lazard analysis predicts the LCOE for battery storage would fall to $168/MWh as soon as 2017, a level that would change the calculus for power plant usage considerably, especially considering that solar PV costs are also predicted to continue falling as well.

Meanwhile, the Lazard analysis predicts the LCOE for battery storage would fall to $168/MWh as soon as 2017, a level that would change the calculus for power plant usage considerably, especially considering that solar PV costs are also predicted to continue falling as well. Should battery costs continue falling (the Lazard analysis assumed $300/kWh capital costs), solar PV plus battery storage could start becoming an attractive alternative.

Though that large solar PV plus battery plant remains hypothetical, smaller grid-scale systems are already being deployed, both in the U.S. and elsewhere, often by adding storage to existing facilities. Residential- and commercial-scale deployments are also growing.

Not surprisingly, much of the activity is in Germany, where residential solar plus storage is already a rapidly growing market (largely because of favorable regulatory treatment). In November, Belectric and Vattenfall added about 2 MWh of lead-acid battery storage to the 68-MW Alt Daber solar plant in Wittstock in the country’s northeast.

Energy storage solutions firm Greensmith reported to POWER that the company has deployed a number of solar-plus-storage projects, including one at a substation near San Diego that is integrated with a nearby solar PV farm for firming, time-shifting, and power quality applications. According to CEO John Jung, time shifting into evening shoulder hours is an application his clients are looking at, though it is only one of an array of storage functions. “Storage is already becoming viable against other energy assets because of its ability to combine multiple value streams,” he said.

CSP, however, is not standing still, and there are advances in the works that could improve efficiency and thus reduce LCOE. Iowa-based Nexus Renewables is preparing to test a new approach that would use a segmented linear parabolic reflector and two separate heat transfer fluid systems (molten salt at high temperature and oil for lower temperatures), both of which can be used for thermal storage (Figure 4). Nexus says the approach would allow the use of less-expensive and less-complicated components. Demonstration projects are planned for Iowa State University and, later, at the Sandia National Laboratory Molten Salt Loop in Albuquerque, N.M. 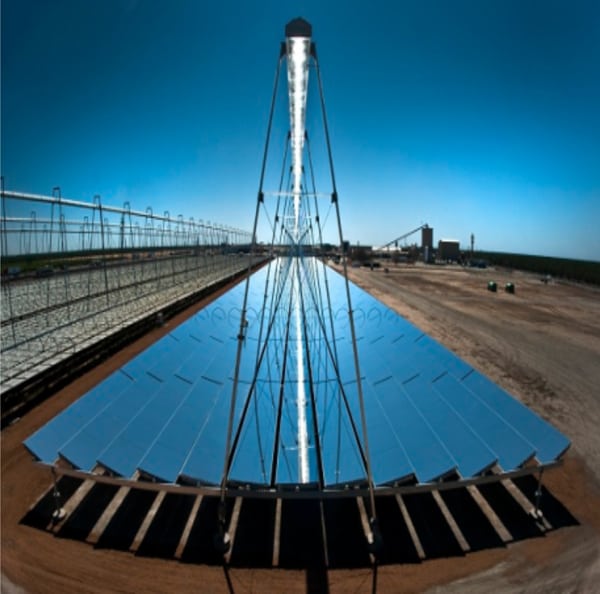 Given the fast-moving nature of the solar industry and the rapid pace of technological developments, forecasting trends more than a few years out is fraught with risk. But with the need for dispatchable renewable power continuing to grow, solar and storage are certain to remain partners no matter the approach used.