Aqua-Vu, a provider of portable underwater viewing systems, introduced the Claw 360, a device designed for the detection and removal of objects in an underwater environment. The Claw 360 incorporates a Sharp 520 color camera that can rotate 360 degrees to scan the environment. Lighting is provided by high-intensity LEDs that rotate with the camera. The camera is coupled with a robotic retrieval claw capable of retrieving objects as small as nuts and bolts or items up to 40 pounds. The control side of the Claw 360 employs a 7-inch LCD color monitor with onboard digital video recorder in an impact-resistant housing. The housing itself acts as the cable spool, holding 75 feet of heavy-duty marine-grade cable with a break strength of 200 pounds. The system comes complete with rechargeable battery yielding up to eight hours of use. Capable of operating in temperatures up to 165 degrees, the Claw 360 can be used to detect and remove obstructions, debris, errant tools and parts from underwater environments as preventative maintenance. ( http://www.aquavu.com) 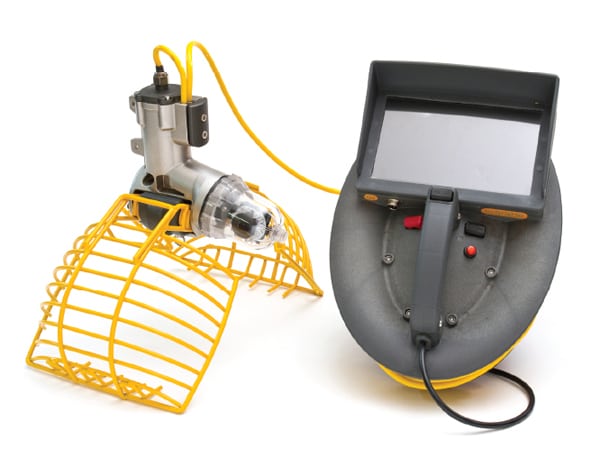