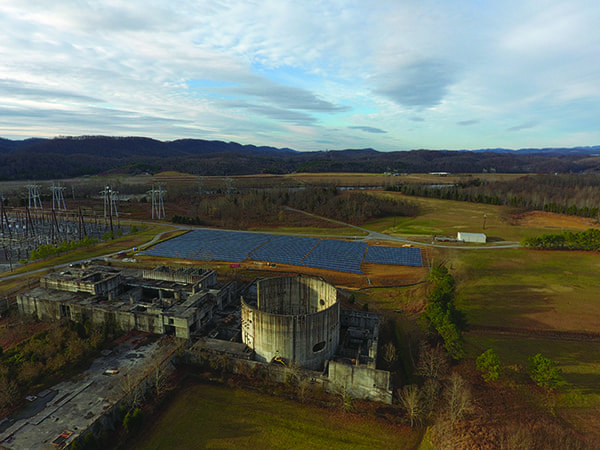 The framework of a cooling tower. Weathered concrete walls, with empty holes as windows. The remains of what might have been provide the backdrop for what is—a solar farm that’s boosting economic development in a part of rural Tennessee.

The concrete shell of an abandoned nuclear power plant construction project has been part of the landscape of Surgoinsville, Tennessee, for almost four decades. Long-time locals recall when the Tennessee Valley Authority (TVA) sought to revitalize the rural area in the state’s northeastern corner with a power plant that brought the promise of jobs, along with a plan to produce electricity that would serve TVA’s entire grid.

That plan, and its promise, ended in 1981 when TVA pulled the plug on the Phipps Bend nuclear project, laying off workers and halting construction. The plant, which was being designed to house two General Electric 1,200-MW boiling water reactors, was more than 40% complete. TVA cited economic factors, including falling power demand across the region. Years later, a local economic development effort turned the site into an industrial park. Many in the area still thought the site could be something more.

Brian Bednar was among those optimists. Bednar, the president and owner of Charlotte, North Carolina-based Birdseye Renewable Energy, was familiar with the area around Surgoinsville and Hawkins County. Birdseye is a developer of solar facilities across the southeastern U.S., with more than 430 MW of greenfield projects operating, including 34 projects at schools in eastern Tennessee. Bednar had worked with Holston Electric Cooperative, the local electric utility, in the development of solar arrays to provide power for area schools through the TVA Generation Partners Program.

“Infrastructure that was devised for the nuclear plant was attractive for us,” Bednar told POWER in a recent interview. “We were drawn to the existing electrical infrastructure that offered low-cost interconnection potential. One of the keys when we do solar development, is we look where the cost to interconnect [to the grid] is always as low as possible.”

“The second thing was that the plant area had been converted to an industrial [office] park. We had conversations with the local development board and the utility,” he said, noting local leaders were looking for ways to expand economic development in the community. “We definitely saw the advantage of having it co-located within their industrial park. And it made it an ideal location for them as they’re trying to attract more industrial customers.”

Said Bednar: “[It was] the idea of taking surplus land from a failed project, that wasn’t really attractive to a manufacturing plant. Solar was an ideal use in a circumstance where conventional development wasn’t desirable. Despite a few technical challenges from its orientation and size, we knew that this project could be unique and create value in the shadow of a failed project. It’s an economic success story.”

Birdseye brought United Renewable Energy (URE) of Alpharetta, Georgia, on board as the engineering, procurement, and construction (EPC) contractor for the project, which has utilized numerous service and equipment vendors. The 1-MW solar farm sits on just less than five acres, with an orientation 30 degrees southeast. The array (Figure 1) includes 2,983 Hanwha QCells Q.Plus L-G4.2 335W Poly solar panels, with NEXTracker’s NX Horizon single-axis tracker. The tracker system adjusts the angle of the panels to receive maximum sunlight throughout the day.

The project uses 27 Huawei 30-kW (1,000 V) string inverters, which convert the variable direct current (DC) output of a solar panel into a utility-frequency alternating current (AC) that can be fed into a grid. Bednar said that “aside from the existing distribution line we interconnected to, the nuclear facilities were not reused.”

Bednar said construction of the solar farm, which provides power to Hawkins County and the TVA grid, took about 10 weeks. Community leaders and the companies involved in the $1.8 million project celebrated its completion in a July 4, 2017, ceremony at the site. 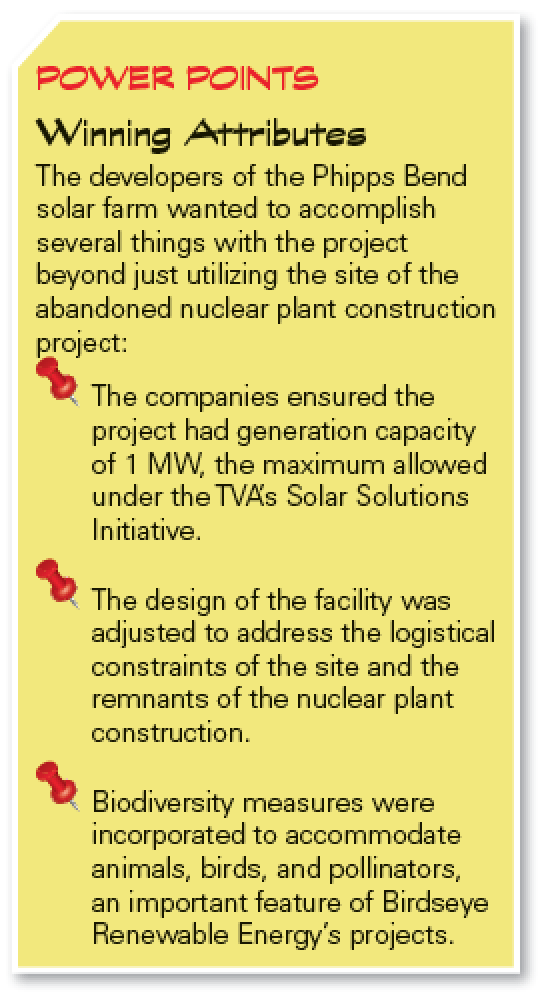 The project is part of TVA’s Solar Solutions Initiative (SSI). The SSI provides incentive payments for mid-size solar projects across TVA’s service area through the utility’s Renewable Standard Offer program, which requires projects to use locally certified solar installers. The hiring of local workers was important for those who still remembered the jobs lost when the nuclear plant project ended.

Keith Herbs, executive vice president of URE, at the time of construction said it was important for his company “to utilize local labor to maximize the economic benefit of [the] project to the local community.”

The project also is another source of property tax revenue for Hawkins County and reportedly generates more than $4,000 annually in rent for the Phipps Bend Joint Venture. Local officials said creating jobs and building more tax base were goals of the IDB as the project was being discussed.

Bednar said the Phipps Bend location was still considered a greenfield site, not a brownfield, because the nuclear plant never operated.

“We took extra steps to verify that there were not residual risks such as grounding grid from the original construction in the late 1970s,” Bednar said. “After we cleared those items, the project flowed like others we have completed many times before. Once we did our geo-technical due diligence we found there wasn’t anything that would affect our construction.”

There were some logistical challenges to overcome, in part because Bednar said the project “is smaller than we typically do.” He said many of Birdseye’s projects are 20 MW or larger facilities.

“I am proud of the analysis that went into the design,” he said. “In order to construct the full 1-MW project we constructed the array 30 degrees off azimuth and accepted shading from a nearby microwave tower. Our analysis projected that the time-of-use revenue from the larger system exceeded the impacts from the constraints.”

One aspect of the solar farm is part of what Bednar calls his company’s commitment to biodiversity.

“Birdseye prides itself on having ancillary benefits from our solar projects,” he said. “I am proud of the biodiversity measures we incorporated in the project. The Nature Conservancy targeted our project for a wildlife survey and is monitoring the impacts from our measures. They have placed cameras to study wildlife populations on the site. We got camera footage of raccoons going in and out through the fencing. Initial results are very promising.”

Bednar said his company has worked with wildlife experts on ways to accommodate animals and birds at Birdseye’s projects. “We find there’s value for providing habitat for pollinators. A lot of solar [project] neighbors tend to be residential or agricultural. We’re trying to come up some data to encourage other developers and asset owners to incorporate biodiversity measures in their projects.”

Repurposing brownfield sites as solar farms is happening worldwide. Solar arrays and wind farms are being sited on top of abandoned strip mines. The U.S. Environmental Protection Agency, in conjunction with the Department of Energy’s National Renewable Energy Lab in Golden, Colorado, has studied more than 80,000 brownfield sites with an eye on their potential as renewable energy facilities.

The success of Phipps Bend could lead to similar projects for Birdseye.

“We’ve had some conversations,” said Bednar. “We’ve looked at [repurposing] coal-fired plants, we’ve looked at brownfields. At the scale we’re doing projects, generally 20 MW or above, it makes sense to do a brownfield site rather than a greenfield site, because there is usually abundant land.” ■