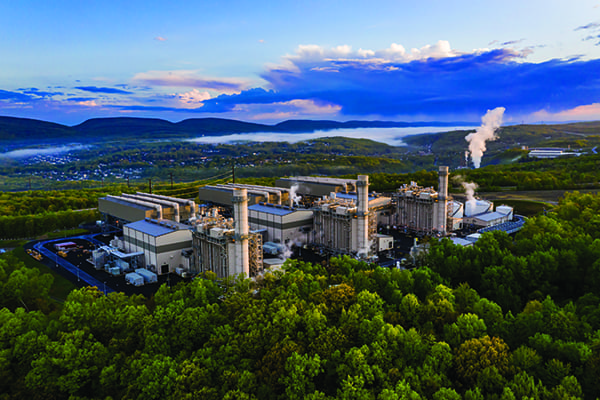 To endure a highly competitive and rapidly changing marketplace, Invenergy made the bold choice as it developed the 1,480-MW Lackawanna Energy Center in Jessup, Pennsylvania, to pair a first-of-its-kind single-shaft design with recently introduced GE HA-class gas turbines. The project proved to be a triumph for the industry heavyweights that collaborated to complete it on an aggressive schedule, as well as for its developer, which now operates the highly efficient and remarkably flexible power plant.

As Invenergy CEO Michael Polsky tells it, all the markers were right in 2012, when the privately held global developer first began mulling building a power plant on the side of an Appalachian Mountain just outside Scranton in Pennsylvania’s Lackawanna County. A key consideration was that it would operate in the cutthroat PJM Interconnection wholesale power market—where 18 GW of new combined cycle gas turbine (CCGT) capacity, incentivized by relatively stable and cheap shale-driven natural gas prices, was already in planning to replace a slew of newly announced coal retirements. But rather than dwell on whether the plant was “needed,” Invenergy’s approach was focused on establishing “the best project at the best location” in order to ensure competitiveness, Polsky said.

The Lackawanna site had “very low interconnection costs, which is very critical, and a good gas supply story,” noted Polsky. However, because interconnect positions initially supported only 1,370 MW, the company first considered using gas turbines that it had in storage, as Dan Ewan, Invenergy’s senior vice president of Thermal Development, told POWER.

“We thought, ‘Well, maybe we could do a combination of a CCGT and a peaker plant,’ ” he recalled. But “Development is never sort of a straight path,” noted Ewan. “Opportunities arise, and we respond.”

The first opportunity came in 2014, when interconnection studies suggested that the site had the potential to house a much bigger power plant than Invenergy had anticipated. At the same time, General Electric (GE) had just launched its 7HA.02 high-efficiency, air-cooled natural gas combustion turbines. The high efficiency and operational flexibility of the state-of-the-art gas turbines was especially attractive, and it was a bonus that GE had worked closely with Invenergy on multiple projects before, Ewan said. However, “before we’d even totally closed our contract with them, they came out with a single-shaft unit,” which opened up new options, he said. They included the innovative configuration Invenergy settled on: three 500-MW power islands—each equipped with a combustion turbine, a steam turbine, and a generator on a single shaft. 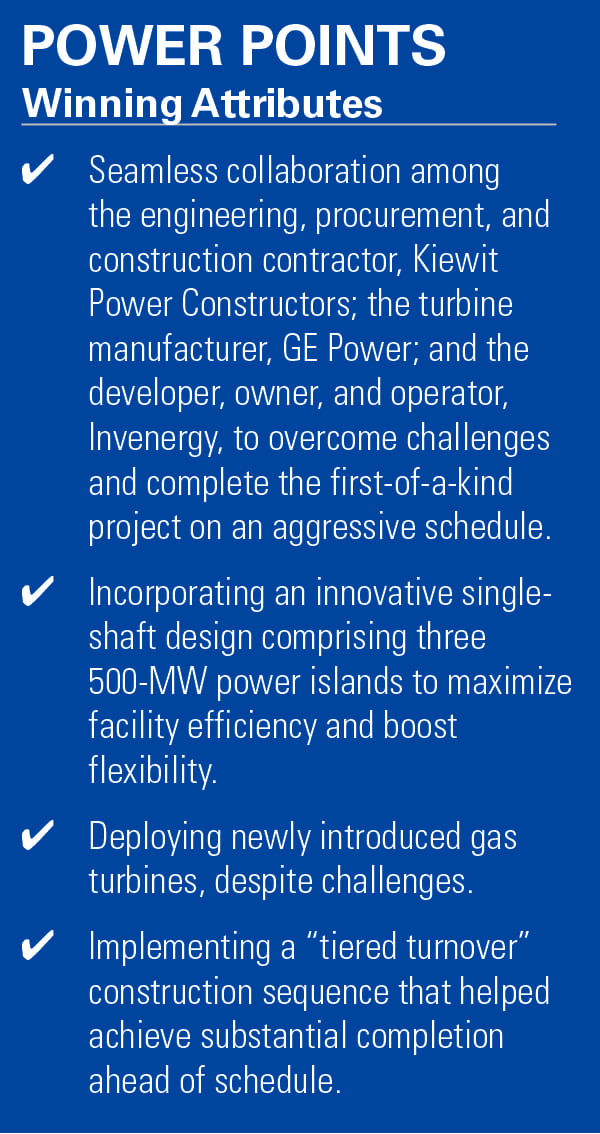 A Single Shaft with Myriad Benefits

The approach was typical for the company Polsky founded in 2001, and which, owing in large part to its characteristic “entrepreneurial” style, has grown its development portfolio to more than 22 GW, including wind, solar, energy storage, and natural gas projects. However, Polsky noted, project development at Invenergy is often conducted with “careful thinking, because, really, we are a private company, and we can’t afford big mistakes,” he said. A key reason that it opted for GE’s single-shaft design—never before installed on a 60-Hz commercial power plant—was because it offered “unique opportunities,” he said.

Essentially, “we could begin to generate power while we were still under construction,” Ewan explained. “And now during operation, [it] allows us much greater flexibility in maintenance, because we can take one unit offline, and still have two units generating power. So, we’re continuing to make revenue for the project, and we’ve got a lot more flexibility and maintenance. And if there are situations where you have forced outages, it doesn’t affect the entire plant.”

As Dave Ross, GE vice president of Sales for North America, told POWER, the first-of-a-kind configuration Invenergy settled on was a result of “many iterations.” But along with Invenergy’s “vision,” its successful implementation would have been more challenging without the diligent execution achieved by Lackawanna’s engineering, procurement, and construction (EPC) contractor, Kiewit Power Constructors (KPC).

KPC is one of only a few firms that “has the engineering capability, construction experience, and the proven track record to build an incredibly complex multi-billion-dollar facility like Lackawanna,” Ross said. KPC Project Engineer Joseph Kubrak, meanwhile, credited GE—a company with which KPC did not have a contract—with full-fledged cooperation, which he said was pivotal to further its own design and minimize field impacts.

In addition to installation of the new turbines, the configuration was new for Kiewit, and while it offered an array of benefits, it also posed challenges. Most notably, it supported staggered turnover dates for each unit (Figure 1), which in turn translated into a unique opportunity for sequencing construction that “allowed the team to take lessons learned from one unit to the next,” said Kubrak.

The process, which is unusual for the industry, required designing, constructing, and commissioning 90% of the electrical systems with the first unit, and commissioning it along with all the balance-of-plant (BOP) systems. It required “extreme precautions while operating the first unit and commissioning the second and third units,” said Kubrak. However, cross-ties between the units offered another unique feature, which enabled isolation and outage coordination during commissioning, he said. KPC also worked doggedly on the difficult alignment of the single shaft through the steam turbine, generator, and gas turbine. “[It] was something very challenging and new to our team,” he said. “We had a highly skilled team of millwrights to work through the many difficulties in achieving alignment.”

Under this “tiered-turnover” model, construction kicked off in March 2016, and by June 2018, Unit 1 and BOP systems had been turned over. Unit 2’s turnover came in September 2018. Invenergy told POWER the complete facility was available for commercial operation nearly two months earlier than the contractual completion date of Jan. 31, 2019, which is when KPC marked turnover of Unit 3.

“The timeframe for completing one unit with BOP systems is similar to other projects we’ve built,” said Kubrak. “However, what makes Lackawanna so special is the size, complexity, and first-time builds involved with it—and completing everything ahead of schedule.”

Invenergy’s Ewan noted the company had expected pains with the project’s first-of-a-kind aspects, which otherwise typically require a lot of time for adaptation, but Lackawanna demonstrated the merits of strong collaboration. Its long-term working relationship with GE, for example, was crucial when GE discovered a critical oxidation issue that affected the lifespan of a blade component in the first generation of GE’s advanced HA gas turbines. The issue affected some of GE’s first commercially installed 7HA.02 turbines at an Exelon CCGT plant in Texas that came online in June 2017. GE noted the turbines at Lackawanna are “the same generation as those units, several serial builds later.” But as Ewan explained, when Invenergy chose the new technology, it determined that the turbine’s efficiency and flexibility benefits outweighed the risks.

“Yes, there are concerns that people have about infancy issues with new technology,” he said, “but the way we’ve found to deal with it is just in a very collaborative partnership with the original equipment supplier.” As a fix to the blade issue, GE performed modifications at the project during the plant’s first year of operation, an event that required a scheduled maintenance outage. “But they were completely on top of them and we really had minimum downtime, and we did not experience any failures,” said Ewan. “They did their root cause evaluations, came up with upgrades, and implemented those upgrades before it ever became an issue.”

Another reason that Ewan cited for choosing the newly released GE equipment was because GE offered to work closely with Invenergy’s lender’s independent engineer to understand the technological advancements and risks. And, as crucially, “GE also provided stronger warranties than you might see in a typical, later-stage technology,” he said.

Especially notable is that the massive project—bigger than anything Kiewit had previously undertaken—also required the largest staff and craft workforce that KPC had ever assembled. The project scope was remarkably vast. Because the plant is built on the side of a mountain, for example, it required a “large amount of cut-and-fill, which was a pretty significant civil challenge,” Ewan said.

At construction peak, more than 1,000 workers were on site—some pulled from across Kiewit, and others, sourced from local unions—to meet the tight schedule. Crews even worked nights after it was upended for nearly a week when Winter Storm Stella barreled across the Northeast in the spring of 2017.

For Polsky, the payoff has been sizable, particularly as power markets evolve. “Our gas plant is very competitive when compared to everything else that exists out there,” he said. A major renewables developer, Invenergy’s “unique perspective” on the “market situation, market pressures, and what makes sense, what doesn’t make sense,” ensured all the markers were in place. All else it took for Lackawanna’s successful construction and operation was “the best and most efficient equipment available on the market and a plan that can be executed,” he said. ■