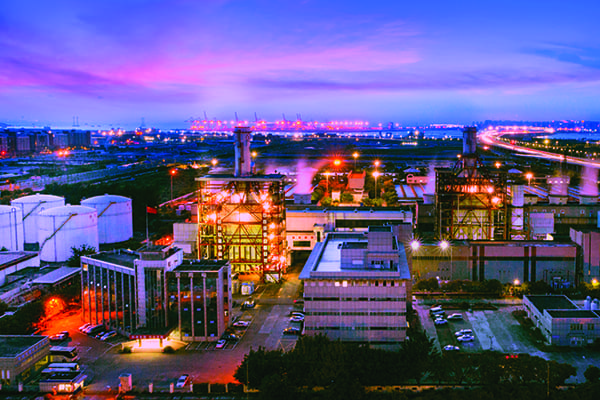 Shenzhen is a thriving city in southeastern China. With nearly 12 million residents and a booming technology sector, Shenzhen has been called China’s “Silicon Valley.” But as the city has flourished, its need for power has grown, and with it, so have pollution concerns.

In an effort to reduce emissions, the Shenzhen Municipal Government initiated a “Blue Sky” campaign. One of the goals of the initiative was to reduce NOx emissions from all gas-fired power plants in the city to less than 15 milligrams per cubic meter (mg/m3).

“Power generation companies are currently facing dual pressure from environmental indicators and economic performance,” said Liang Jianqiang, head of Shenzhen Nanshan Power Plant (opening image). “We continue to search for a two-way solution to help contribute to local blue skies while improving asset performance. GE’s [Dry Low NOx] DLN 1.0+ Ultra Low NOx combustion upgrade is a perfect fit for our needs. Through this cooperation, GE has not only confirmed its technological advantage, but also demonstrated its excellent capabilities in execution. With the help of GE, we have succeeded in upgrading our plants while maintaining a steady supply of energy.” 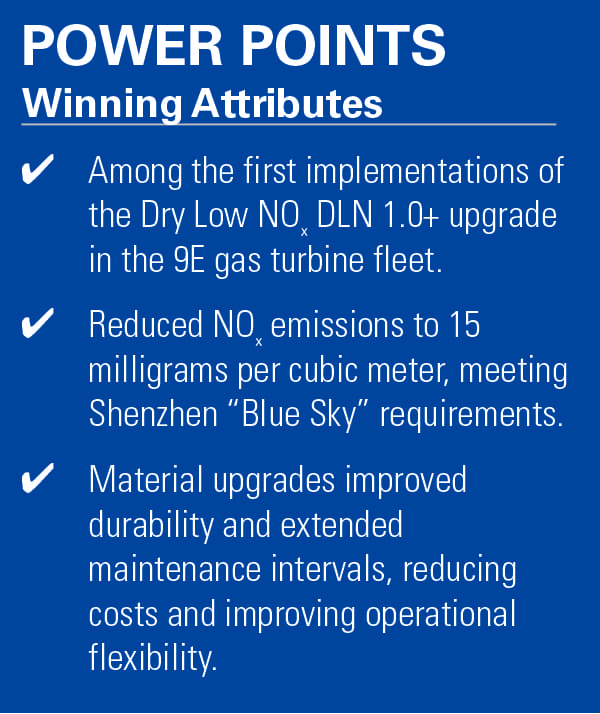 In addition to the two units for Shenzhen Nanshan Power Corp., the DLN upgrade was successfully completed on seven other GE 9E gas turbines at four additional power generation enterprises in Shenzhen. Two units were upgraded at each of the Shenzhen Datang Baochang Gas Power Generation Co. Ltd., the Shenzhen Yuhu Power Co. Ltd., and the CNOOC Shenzhen Power Co. Ltd. facilities, and one unit was upgraded at the Shenzhen New Power Corp. plant. While the Nanshan plant is being recognized with a POWER Top Plant award in the gas-fired category, the combined project is worthy of acknowledgment.

The secret behind lowering NOx emissions from gas turbines involves reducing the temperature of the flame inside the combustor, Xu Xin, GE Power China Project Delivery and Install Based Services execution leader, told POWER. A leaner fuel mix, whereby the natural gas burns in a higher volume of air, can deliver this cooler, low-NOx flame, he said.

“The leaner mix has to be made up in the turbine’s fuel nozzle before igniting and burning the mixture. It’s similar to a carburetor that mixes the air and fuel for injection into a car’s engine. It’s a delicate balance. If there’s too much natural gas in the mix, the flame will be too hot. If there’s too much air, the flame could blow out, like a birthday candle,” said Xu Xin.

GE’s engineers improved this air-to-fuel ratio with modifications to the turbine’s combustion hardware. This included the addition of a venturi shape to the liner—the pipeline that feeds natural gas into the front end of the turbine’s combustor. A venturi looks like the pinch point in an hourglass, and it restricts the flow of natural gas into the mix. The venturi serves a dual purpose: it tightly regulates the entry of natural gas in the air-fuel mix, and also prevents backdraft, or the flame blowing back into the front end.

Xu Xin explained that engineers also punched a pair of dilution holes, which pump in compressed air to achieve a leaner fuel mix, downstream of a transition piece that links to the combustion chamber. This allows for the last-second addition of air to obtain the optimum temperature before the hot gases are burned. It’s almost like having a soda fountain on hand to perfect the spritzer just before serving, he said.

Other changes were also made to the hardware to improve its durability. For example, Xu Xin said more-robust material was used, such as applying Nimonic 263 to the transition piece and the liner aft frame. Nimonic 263 is a nickel-based alloy with a higher strength capability than Hastelloy-X used on a prior DLN system. This means parts from the new design have less creep deflection.

The upgrade also included a better thermal barrier coating (TBC)—Class C versus Class B—which was applied on both the transition piece and the liner. TBC is an insulating layer that reduces the underlying base metal temperature, allowing higher firing temperatures while reducing thermal stress and cracking.

On the software side, a corrected parameter control (CPC) was used to gather mountains of data about the turbine’s operating environment. This includes ambient humidity and temperature readings, as well as inlet and exhaust pressure, which are all factors that can affect the production of NO x and other pollutants. These inputs change regularly, so the software is constantly correcting the air-fuel mixture to deliver the lowest-possible NOx emissions (Figure 1).

DLN Solutions Expanding to Other Models

In August, GE announced its first order for the 7F DLN 2.6+ Flex upgrade solution, which will be installed on a 7F.03 gas turbine at Southern California Public Power Authority’s (SCPPA’s) Magnolia Power Plant in Burbank, California. The upgrade is expected to help the Magnolia plant, which is operated by Burbank Water and Power, significantly improve its ramp rate and increase its operational flexibility, with a lower load operation profile to respond faster to the frequent shifts in grid demand due to renewable power fluctuations. The upgrade may decrease turndown and emissions by more than 25% on the Magnolia unit.

The 9E DLN 1.0+ and 7F DLN 2.6+ Flex combustors share the concept of axial fuel staging, which is the injection of fuel downstream of the fuel nozzles into the transition piece to extend the emissions compliant load range. This concept is utilized on some 7EA, 7HA, and 9HA gas turbines as well. Each variant looks a little different in how the fuel is delivered and the amount of fuel injected, but each subsequent introduction leverages the field experience and best practices from the others.

The DLN category of combustors was first released in 1991 as an alternative to the standard, or diffusion flame, combustors. It enables significantly lower emissions without the addition of water to reduce NOx, hence the name “Dry” and “Low NOx.” Although this category of combustor has been the basis for combustion technology progression for many frames, the DLN 2.6+ Flex combustor only applies to the 7F fleet.

Each upgrade required one technical field advisor, one control engineer, and 10 craft labor workers. In addition, one combustion engineer, one design engineer and one software engineer participated in the first unit commissioning. A majority of the personnel involved were Chinese nationals.

“Cycle time was tight,” Xu Xin said. Parts especially faced an extremely short window. The project team tried to communicate appropriately and aligned schedules to meet every customer’s needs, optimizing parts delivery based on outage progress. In the end, “it took us less than six months from receiving the request to complete the project,” Xu Xin reported.

The biggest challenge for the team stemmed from uncertain operation modes and temporary changes implemented by customers, because commissioning required proper timing under specific grid conditions and gas supply volumes. Nonetheless, commissioning results were better than expected. The project was completed following GE’s strict environmental, health, and safety guidelines, and no safety issues were reported.

As the first installation of GE’s DLN 1.0+ upgrade on the 9E fleet, its implementation provides valuable experience and serves as a model for future DLN 1.0+ deployments on the nearly 700 units in operation around the world. The innovative upgrade reduced NOx emissions from 50 mg/m3 (about 25 ppm) to 15 mg/m3 (about 7.5 ppm), helping the nine Shenzhen units meet the “Blue Sky” Campaign’s requirements in record time. As such, Shenzhen Nanshan Power Corp. is well-deserving of this distinguished award. ■