The gas-rich Persian Gulf state of Qatar in May commenced construction of the region’s largest power and water plant, a massive project comprising eight gas turbine generators, eight heat-recovery steam generators, four steam turbine generators, and 10 desalination units. When the first phase wraps up next year and the second is completed as anticipated in April 2011, the $3.9 billion Ras Girtas Power and Water project in the Ras Laffan industrial zone will produce 2,730 MWh as well as 63 million gallons of desalinated water a day.

Qatar is in the midst of a construction frenzy despite the global economic downturn. And it is planning ahead, making the Ras Girtas Power and Water project — a joint effort between the Qatar Electricity and Water Co. (QWEC), a consortium of Japan’s Mitsui and France’s Suez Energy International, and Qatar Petroleum — one in a string of planned projects. Notable among these projects will be the Ras Abu Fontas project (Figure 4), a desalination plant that will produce 45 million gallons of water per day, when completed this December. 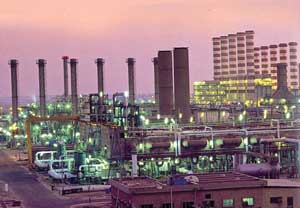 4.    Gas and a glowing future. Gas-rich Qatar, whose economy is booming despite the global downturn, is planning ahead to meet its anticipated power needs—and those of neighboring Gulf states, which are struggling to meet power demand. It recently began construction of the $3.9 billion Ras Girtas Power and Water project, which will produce 2,730 MWh as well as 63 million gallons of desalinated water a day. Also in the works is the Ras Abu Fontas project (shown here), which has a production capacity of 45 million gallons of water per day. That project will be completed this December. Courtesy: Qatar Electricity and Water Co.

"There is no shortage of water or electricity supply and we do not have any problem meeting the demand," QWEC General Manager Fahad Hamad Al Mohannadi told reporters recently. "Actually, we are ahead of schedule. The water project we are developing now is mainly intended to meet future demand in the next three to four years with real estate and industrial development moving fast."

But experts suggest that Qatar is positioning itself to provide bulk power in the Middle East. Business Monitor International expects the state, whose current installed capacity sits at about 9,000 MW, will increase power generation by an astounding 193.5% before 2018 — almost at the top of the range for the Middle East/North Africa region. The Middle East has a current installed capacity of 152 GW — 97% of which is thermal generation — accounting for 3.5% of global electricity generation. According to Nomura Middle East Energy and Power, the region — and in particular Kuwait and the United Arab Emirates — is already struggling to meet its power needs, and overall demand increases are expected to average 6% from 2009 to 2020. Making matters more complex, the Gulf Cooperation Council — a European Union – like trade bloc created by the six Arab states in the Persian Gulf — keeps power costs in the region artificially low with subsidies that vary, on average, from 60% to 70%.

Finally, the region — with the exception of Qatar — experiences crippling fuel shortages, even though it holds 43% of global crude oil reserves and 23% of the world’s gas reserves, according to Dr. Adnan Shihab-Eldin, former OPEC secretary general. The reason for this, he told Emirates Business on the sidelines of a recent utility summit, is that the bulk of the Gulf’s reserves is associated gas, which is fully committed until after 2020. Non-associated gas is found in few places — like Qatar, which is still restricted by a gas moratorium. The dilemma will force governments to break their existing export contracts or find new fuel sources, he said.