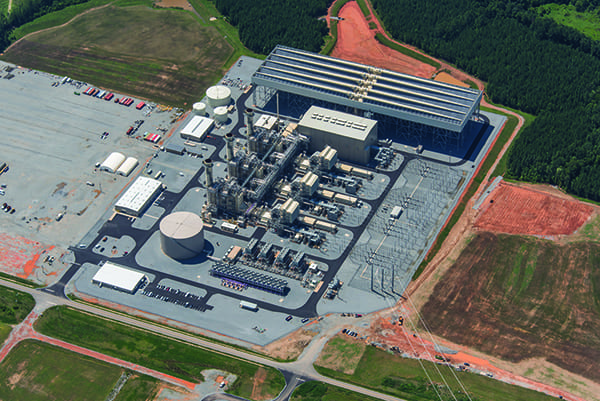 Dominion Energy’s Greensville County Power Station is noted for its efficient performance and its strict emissions limits, and its workers also contribute to its success.

There are many adjectives to describe a high-performing power plant. There may be no higher praise than calling it a workhorse.

As for being a workhorse? Karl Humberson, director of generation projects and generation construction for Dominion Energy, told POWER that “Greensville was built around efficiency,” and designed to the highest performance standards. “We’re running at baseload case 70% to 80% of the time. We typically utilize duct burning and maximum output modes 10% to 15% of the year, and we’ve designed to meet those standards; however, we also designed our system and steam turbine to be more efficient during baseload cases.” 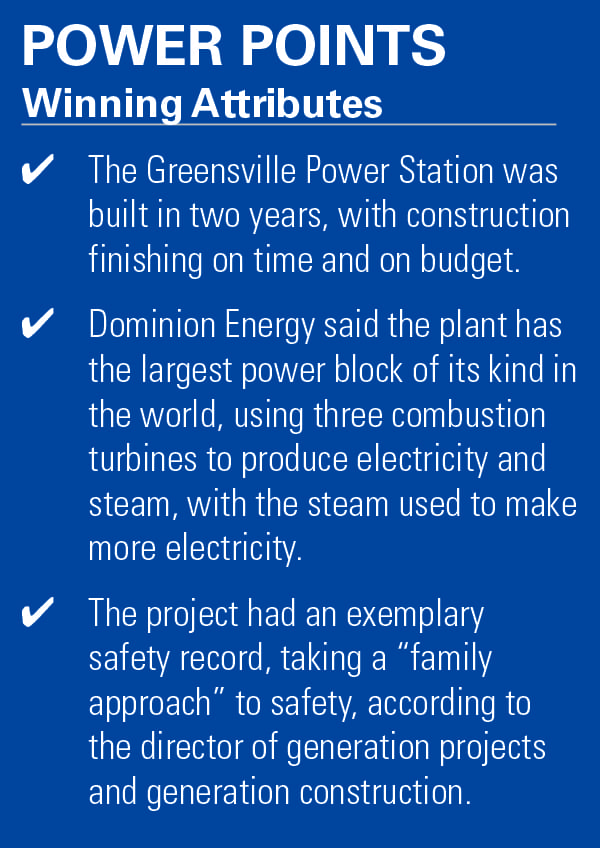 Koonce said of Greensville when it went online: “It will be a workhorse, running around the clock to provide our customers reliable, low-cost energy. It will also complement and support our growing solar fleet.” That solar fleet is part of Dominion Energy’s 2.6 GW of renewable generation in 10 states, but the utility remains reliant on natural gas for much of its electricity production, with Greensville the latest addition to its group of 15 gas-fired plants.

“The size and scope of this plant is amazing,” said Humberson. “It is an engineering marvel in my opinion.” Greensville’s standout engineering and performance are key reasons it’s the recipient of a POWER Top Plant award.

Second of Two Plants in the Area

Dominion Virginia Power, a subsidiary of Dominion Energy, submitted a proposal to develop a combined cycle natural gas-fired power plant in Greensville County in March 2015. It received construction and environmental approvals from Virginia regulators in mid-2016, and construction of the $1.3-billion Greensville station began in June 2016 (Figure 1). The plant was completed in July 2018, with first fire the following month. More than 1,800 workers were at the site at the height of construction.

Humberson said the plant was completed on schedule and on budget, and represents another large investment by Dominion Energy in an area known as Southside. Dominion Energy began operating its $1.1-billion, 1,360-MW Brunswick County Power Station in 2016; the two plants are separated by seven miles.

“From the outside, [the two plants] look very similar,” said Humberson. “[Brunswick] was a blueprint in how the Greensville plant is laid out, but once you pull back that layer, the plants are very different animals.”

Humberson noted several of Greensville’s details that he said set it apart from any other U.S. power plant. “This is the first power plant in the U.S. that had to meet medium-risk [cybersecurity] NERC [North American Electric Reliability Corp.] requirements prior to going into service,” he said. “We had teams and teams of people focused on how to meet NERC medium-risk requirements before entering commercial operation.”

The M501J gas turbine, with a 15-stage axial-flow compressor, can operate at 1,600C inlet turbine temperature, and provide up to 64% net thermal efficiency in combined-cycle operations. The Greensville turbines were built at MHPS’s manufacturing facility in Savannah, Georgia.

“The station is the largest power block of its kind in the world,” Humberson said, noting “the three combustion turbines to produce electricity,” and the steam generation, “which is used to make even more electricity.

“Environmentally, especially in terms of carbon emissions, Greensville is one of the cleanest natural gas-powered stations in the country,” Humberson said. “The station’s air permit has the strictest CO2 limits in the nation. In our air permit, CO2 e [carbon dioxide equivalent] is layered throughout. We also are bound by the heat rate on our plant, and we built in a CO2 e limit that we knew we could achieve. We have a greenhouse gas, heat rate emission limit that we have to correct back to. We don’t have any startup exemptions, we have limits based on what we can do when we start up.”

Koonce highlighted the project’s environmental targets when construction began in 2016. “The most important part is that we believe the Greensville power station will be the cleanest and most environmentally friendly combined-cycle facility anywhere,” he said. “Virginia has imposed stricter carbon limits on Greensville than any regulatory agency on any existing fossil-fired facility anywhere. And we expect to live up to that strict standard.”

Commitment to Safe and Quality Construction

“Greensville was no easy project,” Humberson said. “We worked exceptionally hard, we got in on time, we got in on budget, even though we were delayed about 72 days getting our air permit. Fluor was our EPC [engineering, procurement, and construction contractor] on this project and performed admirably in the face of all challenges.

“I think it had a lot to do with our relationships with OEMs (original equipment manufacturers), with Fluor as the EPC, to overcome construction issues,” Humberson said. “It was always ‘project first,’ and everyone bought into it.”

Humberson talked about the camaraderie as the plant was being built, and how “a family atmosphere” permeated the project.

“We were getting people committed with their own personal families. We got the craft level and all the way up buying into this plant,” he said. “We had a 0.39 OSHA [Occupational Safety and Health Administration recordable incident] rate, with more than 8 million man-hours [worked]. We took more of a family approach with safety… brother’s keeper, we are all in this together. We actually shut the site down in July 2017, and all our craft workers were able to bring family members to the site. We asked the question, ‘So who is it you go home for?’ “

Humberson said Dominion Energy organized a plant tour even with several units still under construction. “There was lots of clean-up so we could feel comfortable bringing in thousands of people. It got workers invested in safety programs. I like to tell the story of how I was walking around with one gentleman [that] I thought was a worker, but it was his dad that worked at the site. He told me how thankful he was for the opportunity to visit the site; he told me, ‘My whole life I’ve never known what my dad did.’ Workers were saying ‘thank you’ for letting them experience their work with their families. We had probably the happiest construction site I’ve ever seen in my life.”

Along with MHPSA and Alstom, other companies involved with the project included Fluor, the EPC; AMECO, a Fluor subsidiary, which provided construction tools and rentals for the project; and Enexio, which provided the ACC. Fluor subcontracted Timmons Group to provide the engineering design for three miles of road renovation to support the plant’s construction.

The Greensville plant is expected to provide up to $7 million in property taxes for Greensville County in its first year of operation, and studies show the plant will have about a $36 million annual impact on the area. The plant is staffed by 49 full-time workers with dozens more jobs tied indirectly to the plant.

Greensville also has a positive community impact beyond providing electricity and revenue to the Southside area.

“We actually built a welding lab at Southside Virginia Community College,” Humberson said. The lab, built in a partnership with Fluor, Dominion Virginia Power, Greensville County, AMECO, and the Virginia Tobacco Commission, opened in March 2017. “We teamed up with the local community college and built a welding lab. The first students to come out of the program worked at Greensville,” he said. ■