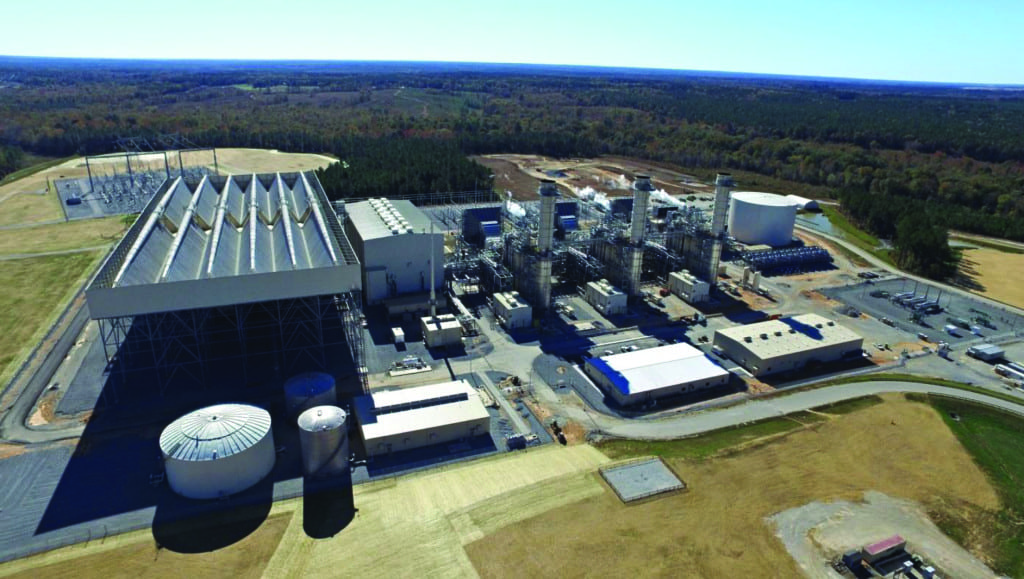 Dominion Energy is sitting in a tricky spot. Electricity demand is growing at an aggressive rate, stressing an aging fleet of coal-fired power plants. To address this challenge, Dominion has started to build a fleet of massive, highly efficient natural gas plants; the largest currently in operation—the Brunswick County Power Station—is a source of ongoing pride for the power company.

“There were coal plants being retired both within our system and across PJM in general. Virginia’s pretty fortunate in that we do have the regional growth, which continues, and we do have the need for power,” Mark Mitchell, Dominion’s vice president of generation construction, told POWER. “Based on that, this plant [is] a fairly large facility. It’s one of the largest and, we think, most efficient combined cycles in the world.”

Dominion projects load growth exceeding 5,300 MW in its service territory over the next 15 years, with an annual growth rate of 1.7%. Dominion has or plans to retire more than 900 MW of coal in its fleet, just a fraction of the 19,000 MW of coal-fired capacity in PJM that was retired from 2011 to 2015.

“We ran a competitive process, telling people what our goals [were], one of them being efficiency, one of them being the amount of output, and of course the cost. So we ran a competitive [request for proposals] to pick Mitsubishi actually at Warren County,” Mitchell said, referencing a slightly smaller natural gas plant in Fort Royal, Virginia, that has been in service since December 2014. “[Then we] decided to use them at Brunswick County. It was through a competitive process, but they were good partners, and they have very good equipment.” 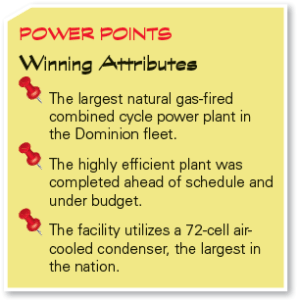 The plant also has an enormous 72-cell air-cooled condenser (ACC), which is currently the largest single ACC in the nation. Luckily, the size of the ACC was not a major impediment to the project, as it is just slightly larger than others that Dominion has installed recently.

“They’re very large structures. They’re fairly labor intensive to install. So it’s just how do you plan for that? How do you plan the startup? Even though it’s the largest, we at Dominion have installed a few others,” Mitchell said. “We installed another one at our Warren County site that was slightly smaller than Brunswick, and now, of course, we’ve installed Brunswick. We’re actually building another combined cycle right now that’s a bit larger than Brunswick and it will have a slightly larger air-cooled condenser.”

Communication Is Key to Success

Construction on the plant began in August 2013. Fluor completed the engineering, procurement, construction, and commissioning for the plant. All told, the plant was completed ahead of schedule and under budget, a feat that was achieved due to transparency throughout the development process, Mitchell said.

“When you’re starting off a project, before you even get in the deal, you need to understand what the drivers of that project are and communicate that,” Mitchell said. “So, when we’re out looking at building a project, we’re interviewing the type of companies that can do this before we ever issue the bid, and we’re making sure that they understand what we are needing out of a project—what the scope of that project is going to be—so that we’re aligned on what the goals are.”

While cost is always a factor in selecting contractors, for the Brunswick project, efficiency was also a key factor that bids were judged on. “We wanted one of the most efficient projects in the world. We wanted it at low cost for our ratepayers to install. So we’re giving the idea that cost is important, that’s one thing that we’re going to evaluate you on, but efficiency is important too,” Mitchell said.

To clearly communicate Dominion’s efficiency requirements, potential contractors were given criteria for efficiency and informed on how that would factor into the overall bid process. “Right up front, you’re just aligning yourself on what the goals are, making sure you understand what the scope is you’re asking for, and what they’re supposed to deliver.”

It seems that this transparency paid off. Mitchell cites the cost savings on the project as the most impressive aspect of the plant. Because of the high efficiency of the plant, fuel savings thus far total about $100 million. Dominion projects an additional $1 billion in customer savings over the life of the station, compared to the cost of purchasing power from the market.

“Obviously it’s a very good facility for our customers in that it’s very environmentally friendly, [with] some of the lowest emissions, but when you talk about $1 billion in saving over the life of that plant, that’s a substantial amount of savings,” Mitchell said.

There are a million things that can go wrong while constructing a power plant. In building Brunswick, Dominion dodged most of those bullets, but it did run into some problems securing skilled labor and transporting components.

Particularly, Dominion and Fluor encountered a lack of welders. “How do you attract that talent? How do you keep them on site in the numbers that you need? It’s something we watch very closely, and we did kind of work our way through that. Sometimes you have to look at different options, to adjust the schedule or adjust different pieces of the schedule, but that was definitely one of the bigger pieces on this job is how we worked through that.”

Dominion and Fluor took a multifaceted approach to fixing their staffing problem, both dealing with the issue immediately at hand, and trying to alleviate the issue for future projects. “You’ve got your Plan A, which is, ‘Okay, let’s get more labor in there,’ but you’re always looking at what is Plan B, what is Plan C, if you don’t get more in there? Can you go to two shifts, or can you use something different? Can you do something differently?”

Between trying to set up shifts to make the best use of the limited number of welders they had and modularizing a significant portion of the facility’s pipe racks, the companies were able to keep construction moving at an acceptable pace. “In this case, it was decided to modularize the pipe racks. When you do that, that allows you to do some major construction outside of the power block where all the congestion is. It allows you to do that in parallel, you can do that off-site, get that pipe rack kind of done and to the site…. So you eliminate a lot of the work in the congested area.”

In an effort to proactively address the shortage of welders, Fluor and Dominion partnered with a local community college to put together a welding school. “People can make a good living off welding. … They’ve been able to train people that might not have recognized that as a skill they could use for their lifetime,” Mitchell said. “We’ve been able to take people out of those welding programs and use them in our system. We’re actually using some on a plant we’re building right now, and beyond that, they’ve got a skill where they can go kind of anywhere in the country and make a living.”

Dominion is currently working on another natural gas plant, just a few miles from Brunswick. The Greensville County Power Station will surpass Brunswick in size, weighing in at 1,588 MW.

Another unique issue Dominion faced at the Brunswick plant was the transportation of large equipment and materials (Figure 1). Components could be transported by rail to within 12 miles of the site, but from there transport had to make use of public roads. Because of the size of many of these components, bridges and roads had to be temporarily reinforced, and much of the transportation had to take place at night to avoid closing roads to public use.

As Dominion continues to build its natural gas fleet, it’s safe to assume that Brunswick will remain a source of pride, even when the larger Greensville plant opens just down the road. ■