NAFTA was both good and bad for Mexico. In both cases, it required a different approach to doing business, and the effects of that shift are still playing out.

Mexico is home to both very strong local players and a full array of multinational service providers from around the world. Since the North American Free Trade Agreement (NAFTA) was signed under President Carlos Salinas, Mexico has been forced to open up its economy and integrate with international markets. This treaty influenced greatly, for better or for worse, the Mexican economy.

Carlos Gottfried, president of Potencia Industrial, an electrical motor producer, details the background of Mexican economic policy: "The government was pursuing an import substitution policy, together with an active policy of building up Mexican expertise throughout all sectors, but especially in core industries such as electricity and the oil and gas field. It is my belief that these policies were very successful. The country grew extensively. It did present some problems, such as high outlay for imports, and there was a cost to the end consumer, but this was balanced out by the huge advantages to Mexican companies. If you were producing quality goods at a reasonable price, you could grow. This situation was radically changed in the late 1980s by the growing influence of the Chicago School economists within the Mexican administration. These U.S.-educated bureaucrats came back [to Mexico] with ideas of laissez-faire capitalism and the free market. When Carlos Salinas came to power in 1988, he told us that he would introduce these free-market ideas slowly over his six-year term. In fact, within six months the border was open and Mexican firms began to suffer. They closed down 200,000 Mexican companies, four and a half million Mexicans lost their jobs, and industry suffered. Many of these skilled workers moved permanently to the U.S., seriously damaging the Mexican economy."

Others would argue that it became easier to invest in Mexico, and while NAFTA opened up Mexican companies to compete with the best and most experienced global companies, it also opened the international market to Mexican companies.

Rogelio Lopez-Velarde, lawyer at LVHS, argues: "My opinion is that the NAFTA agreement forced the liberalization of the electricity sector, and the fact that it came from an external rather than an internal driver is something overseas investors need to consider."

Felipe Ochoa, chairman of Ochoa y Asociados, explains the impact of NAFTA on energy projects: "Until 1994, when we signed the NAFTA agreement, there was a strong participation of local firms, both in construction and the engineering and design of energy projects. Previously, most of the engineering and design took place within the ministries; they had very strong teams for these activities. After NAFTA many of these teams were dismantled, so we lost a lot of this capacity."

This transformation is what makes the Mexican environment unique. The movement from a national, inward-looking economy where Mexican companies were protected from international competitors and enjoyed the active support of the government, to an environment in which Mexican service companies were left to sink or swim, was radical and painful. Although the advent of NAFTA meant that the cheaper manufacturing costs in Mexico proved advantageous in certain circumstances, Mexican labor is not cheap when compared with that in Vietnam or China. Mexican entrepreneurs are well aware of the dangers of relying on price to remain competitive. This puts Mexico in a difficult situation: How can it compete in the global economy when it can’t compete with East Asia on costs or the U.S. on technology?

As Fernando Calvillo, CEO of Fermaca, a gas pipeline company, explains, "There is a lot of potential in Mexico. We have 5,000 kilometers of land bordering the U.S. and an internal market of 114 million people. We are an integral part of NAFTA, and we have free trade agreements with many European and Asian countries. Mexico is a land of opportunities." The proof of this statement is demonstrated by a large number of Mexican service companies that have learned how to grown and prosper under the new conditions.

Some Mexican firms have been able to adapt or enter into partnerships with international firms to help them meet the new market realities. Indigenous technologies are quite limited, and a foreign partner can supply the innovative edge. Rolmex, an example of a successful Mexican company now operating in Brazil, Columbia, and Venezuala as well as domestically, provides additives-based solutions to the CFE and PEMEX. Rolmex General Manager José Luis Chávez says, "If you want to work in Mexico, you need a local partner — not just a local supplier or consultant, but someone who will share the risks and rewards with you."

According to Santiago Barcón, director, Power Quality and North America for Arteche, "Mexico hasn’t been at the forefront of innovation in the past. If you look at the statistics you can see that Mexico has to do better in terms of innovation, in terms of research, and in terms of investment in knowledge. I’m very clear in my view that the best way to combat the current recession is to promote innovation." He insists that investment in innovation has been key to the growth of the local company Inelap, which Barcón cofounded and nurtured before teaming up with multinational Arteche.

Mexican companies don’t have the resources that U.S., Japanese, or European companies have to produce ground-breaking products, but they can advance specific niche markets. By focusing their innovation capacities on these areas, certain Mexican companies are thriving.

Raul Reyes is general manager of PESS (Power Engineering Services and Solutions), a startup company using proprietary developed high-tech equipment to repair turbines and other electrical equipment. PESS is located adjacent to the Tecnológico de Monterrey (a leading university) within a technological cluster. Reyes believes that the clustering effect has helped his business: "Every company offers service, quality, and price. We need to offer something more. We have an R&D department to specifically look at clients’ problems and our location close to so much concentrated knowledge is certainly a great advantage."

Carlos Mortera, general manager of Grupo Omni, a company specialized in the design and manufacture of cooling towers with last-generation technology materials, is also located close to the Tecnológico de Monterrey. He proudly states: "One of the key strengths of Grupo Omni is our commitment to investment in research and design. We have three international patents. Not many of our rivals can match us on this, and it is a fundamental reason for our success." Mortera adds that his company is focusing on high-tech towers and compliments Reyes’ insistence on R&D by pointing out that Monterrey has seven world-class universities, meaning that it is both easy for him to find staff and to find synergies with nearby companies.

Another significant challenge facing the manufacturing sector in Mexico is the need to take advantage of the freedoms NAFTA offers — together with the change in policies introduced by President Vincente Fox and President Felipe Calderon designed to liberalize and increase competition in the economy. Mexico’s huge domestic market, protectionism, together with the massive purchasing power of the CFE meant that many manufacturers traditionally looked inward.

Francisco Haro, managing director of Ottomotores, believes that one of the biggest challenges for firms like his is to cultivate an export-oriented culture: "Until around 10 years ago, Mexico wasn’t an export-oriented country; it didn’t have the appropriate infrastructure to help companies like us who want to export overseas. For example, should I wish to ship a product overseas, it would cost me considerably more and take considerably longer than a company based in the U.S. or Europe. This makes it more difficult for companies like us to compete in the global economy." He goes on to say that while the country is improving, "Mexico still doesn’t have an export-focused culture; we still have a lot to learn."

Jorge Lozano, president of Prolec GE, a world-class transformer producer, believes, however, that the climate is changing: "In Monterrey we are forming mentoring groups whereby large companies can advise smaller companies on all ways of running the business, including the export market." Lozano points out that NAFTA offered opportunities for Mexico, as is demonstrated by the fact that GE closed three transformer factories in the U.S. while expanding capacity in Mexico. He goes on to argue that Mexico needs to realize it faces competition from low-cost manufacturing locations and it needs to focus on tailor-made products, rather than commodities.

Venezuelan Ygor Guilarte — president and director for Mexico, Central America, and Venezuela of Yokogawa — concurs with Lozanos’ view and sees Mexico as a potential Latin American leader. He highlights how Mexico has benefited Yokogawa: "Mexico is the core of the region due to NAFTA’s advantages, such as the maquila model, which will allow us to manufacture cabinet automation equipment in partnership with our global suppliers, which have their factories near us. Hopefully, by next year we will export to South America from here, creating more jobs and following the Mexican model of consistent high-quality standards and added value." 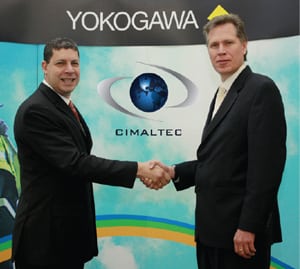 Mauricio García, general manager of CMS International, a Mexican company that manufactures and markets valves and regulators for gas-related solutions, notes that some Mexican companies are focused on price, concentrating on being the low-cost supplier to U.S. companies. Garcia says that before he became general manager, CMS International used to offer its key product, the LOBO, on discount to boost sales. "What we needed to do, and what we are doing now, is to invest and build up a product so that we are able to compete on quality, not just on price," he says. He also reiterated his intention to reopen his company’s research department to further these aims.

This attention to looking at long-term value is a challenge that the Mexican service sector needs to rise to. Manuel Gomez, general manager at SYSCE argues: "Mexican companies focus on buying and selling, not on investing in the product. Mexican companies need to think more how they can make money in the long term, rather than making a quick profit." 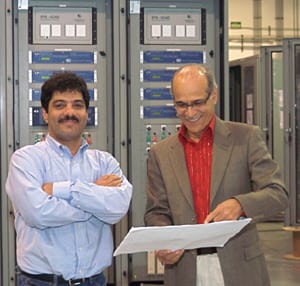 Gerardo Maltos and Manuel Gomez, cofounders and CEOs of SYSCE

Times have changed since the sector was nationally dominated and relatively static. Now successful companies need to be fast-moving. The CFE has a world of potential suppliers, and it is those who offer best value that are most likely to succeed.

Ricardo Arratia, director of Brio Mexico, one of the key advisers to the CFE top management, says, "The CFE went through some considerable changes in order to try to become a world-class company. Since these changes you need to offer them quality as well as value."

Felipe Martin, director general at Kobrex, a specialist cable manufacturer and part of LM holding company, concurs: "All products which are supplied to the CFE need to be evaluated by their internal testing lab to be approved. There is no point trying to cut corners or the like." Flanked by his son and daughter in the family-operated company, he goes on to argue that in his business a large percentage of the product is determined by the price of the underlying commodity (most of their products are copper-derived), thus it is difficult, but very necessary in Mexico, to differentiate yourself from your rivals.

The Mexican service and manufacturing sector has gone through significant challenges, including regular financial crises. At the time of writing, the sector has safely hurdled the current economic crisis and is home to some excellent domestic companies and host to the regional headquarters of various multinationals. The Mexican service sector is in a position to look toward the future with more confidence than before.