Mexico enjoys considerable fuel diversity for powering its generating plants, and its goal is to become even more diversified. 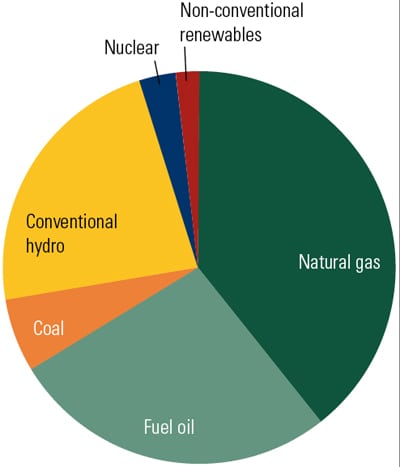 This conversion to natural gas has encouraged investments in liquefied natural gas (LNG), resulting in the CFE becoming the largest shipper and consumer of LNG in Mexico.

To date there are three major LNG projects: in the cities of Ensenada, Altamira, and Manzanillo. The U.S. company Sempra Energy is operating a $975 million LNG receipt terminal that has the capacity to process up to 1 billion cubic feet of natural gas per day. The LNG is designed to supply the needs of Baja California, with the excess being sold to the international market. Regional Vice President, External Affairs of Sempra Mexico, Tania Ortiz Mena, argues that Sempra’s role has been crucial in the regasification of Baja California: "California Baja has gone from being a gas importer to a gas exporter. We believe our inward investment, of around $2,000,000,000 just in infrastructure plays a major role in this."

Mexico is home to a 1,365-MW nuclear plant, Laguna Verde, which is currently being upgraded to increase its capacity by 20% (Figure 2). Enrique González, president and general director of Schneider Electric Mexico, is an advocate of this source: "Every year the technology gets better. It has significant benefits over fossils fuels. I believe the country needs nuclear energy." 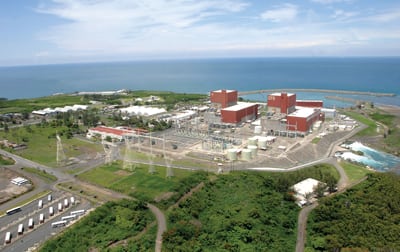 2.    Laguna Verde. Located in Alto Lucero, Veracruz, this 1,365-MW nuclear generating plant is being upgraded to increase its capacity by 20%. Courtesy: CFE

However, critics of nuclear expansion argue that there are still lingering doubts over safety and that the long lag time and the high upfront costs make it more difficult to justify on a financial basis. Andrés Flores Vargas, commercial director of General Cable Mexico, which supplied certain cable components to the CFE for the Laguna Verde plant, predicts further investment in nuclear generation in Mexico: "We supplied products for Laguna Verde, and one of the reasons we have massively expanded operations in Mexico is that we believe that there are growth opportunities here and not just in the nuclear area."

Unlike the U.S., Mexico neither has an abundance of coal reserves nor a large number of plants that run on coal. Coal therefore accounts for just 6% of all generation. Shigeru Watanabe, vice president of Hitachi Mexico, claims that the CFE intends to tender two 700-MW coal-fired plants in the future. He argues that after a long period of building combined-cycle plants there is a need for diversification in the type of power plants being built.

On the renewables front, large-scale hydro provides about 20% of all generation, but nonconventional renewables amount for a very small percentage — around 2.2%.

The Government’s Role in Generation Development

The Comisión Federal de Electricidad is a special case. On one hand it considers itself a world-class organization and claims to work as if it were private. However, at the same time it has to fight off criticisms that it doesn’t do enough to fulfill its social responsibilities. Local manufacturers demand more assistance, and approximately 6 million Mexicans lack access to reliable electricity.

Most market participants agree that CFE Director General Alfredo Elías Ayub’s tenure has improved the CFE by increasing efficiencies and winning more independence for the state-owned company from the federal government. One of the changes that Ayub has introduced was opening up the bidding process for new generating plants to independent power producers (IPPs) in order to attract the participation of top international companies, although this move has arguably hurt local companies.

Ing. René Lechevalier, director general of Sepac, an industrial automation company serving both the CFE and Petróleos Mexicanos (PEMEX), says: "In the past, CFE used to show more preference for domestic companies. However, in the last 10 to 15 years it has been partially open to other participants. True, there has been some degree of patronage towards national manufacture, but we have seen the disappearance of a lot of companies in the industry."

Although the amendment to allow IPPs was passed in 1992, the first IPP permit was not awarded until 1997, when the U.S. energy company AES won a contract to build, own, and operate the 532-MW Merida III plant.

The IPP model was provided a fresh impetus in 2001 when President Vicente Fox of the pro-business Partido Acción Nacional ended 70 years of Partido Revolucionario Institucional (PRI) government. As of December 2009, IPPs operated around 11,450 MW of capacity at 22 plants, and 2009 was the first year in which private investment in energy exceeded public investment (Figure 3). 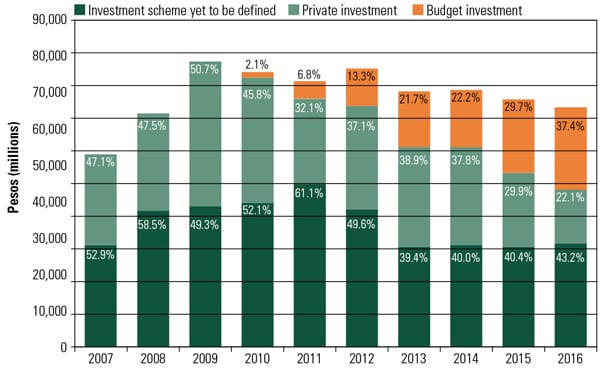 Mexico was able to attract world-class companies to bid in an extremely competitive process. Eduardo Andrade, corporate director for Latin America of the Spanish energy company Iberdrola, comments on the IPP process: "I believe that it has been successful as the bidding process is very competitive and open. IPPs have a clear set of rules to comply with and companies bid aggressively in order to win these contracts. The CFE benefits greatly because of this competition and they achieve efficiencies in terms of the end prices. The fact that contracts are for the long term allows us to be certain of the future. It helps us in financing the project and enables us ultimately to give the CFE a more competitive price." 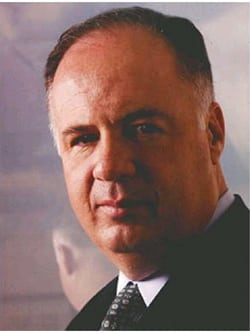 Carlos Álvarez, vice president for Mexico of Intergen adds: "We accept it is a competitive market and we firmly believe that from a neutral perspective it has been a successful process."

Leading energy attorney and former head of the international legal department for PEMEX, Rogelio Lopez-Velarde, of law firm LVHS, mentions that when Électricité de France (EDF) sold its Mexican assets, there were 55 bidders for the projects.

The IPP model has proved itself by bringing world-class energy companies to Mexico. Jaime de la Rosa, president of the Mexican Energy Association AME (Asociación Mexicana de Energía) as well as president of Gas Natural following its takeover of Union Fenosa, observes that the entry of IPPs has been vital for the market and resulted in more than $25 billion of domestic investment in the sector. The joining of forces between these two Spanish giants has worldwide implications and in Mexico pushes them into second place in the market behind Iberdrola. 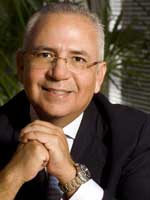 Jaime de la Rosa, when speaking in his capacity as president of Gas Natural, claims that the purchase of Union Fenosa puts them in a very strong position in the market. It added more than 2,000 MW to their portfolio, which, when combined with the purchase of EDF assets previously, demonstrates Gas Natural’s interest in the Mexican market. De La Rosa adds that the extremely competitive nature of the IPP bids and the relatively low internal rate of return means that only long-term committed players come to the market, rather than short-term speculators.

Intergen Mexico is the third-largest IPP player in the market, following its acquisition of Canada’s Transalta’s Mexican assets. Intergen now operates 2,211 MW of assets in Mexico. One of its largest facilities is the 600-MW gas-fired plant located in San Luis de la Paz, 500 MW of which are contracted under a 25-year power purchase agreement (PPA) with the CFE. The remainder is used by local partners under the cogeneration scheme.

Intergen also operates a 1,100-MW gas-fired plant located close to Mexicali in Baja California. About half of this energy is supplied under a PPA to the CFE, while the rest is supplied to the U.S. market. Carlos Álvarez explains that Intergen’s critical mass along the border makes it possible for his company to export to the U.S.: "We own a transmission line which runs across the border and connects the power which we produce to the [U.S.] national grid. The main difficulty is for us is to access this very complicated but potentially vast market." The difficulty that he is referring to relates to the extremely convoluted energy tariffs, together with the need to extend transmission lines. He also believes that "There is potential to develop renewable projects here which will be exported to the Californian market."

In addition to these three large players, Mexico has two Japanese companies running IPPs: Mitsui and Mitsubishi. Though the Mexican market has seen considerable consolidation over the past few years, these Japanese companies have proven to be resistant. Tetsu Nagame, vice president of Mitsubishi Mexico, explains that Mexico is an important market for his company but that it has seen a reduction in projects over the past few years.

Japanese influence can be explained by the power of JBIC, the Japanese development bank, which encourages operations overseas. Shigeru Watanabe of Hitachi Mexico, believes that access to funding provided by JBIC gives them an important advantage over their rivals during the bidding process.

Daniel Galicia — president and general director of ABB for Mexico, Central America, and the Caribbean — is a veteran of the energy industry. He points to three main growth areas: nuclear, renewables, and the transmission network. ABB has a large presence in Mexico, employing more than 800 people, and is one of the major suppliers to the CFE. Galicia is firmly optimistic about operations in Mexico: "We at ABB have invested heavily in Mexico. The system might be different to other countries, but we have made money here and we will continue to make money here."

The presence of eminent global power companies is testament to the successful evolution of the sector and proof that, despite heavy state involvement, there are real possibilities for private ventures. As Mexico’s energy sector evolves, it will offer more opportunities in a wide variety of areas, and the government will be looking to the private sector to help it realize its ambitions.