The Environmental Protection Agency’s (EPA’s) Clean Power Plan (CPP) is likely to be complicated at least as much by political and legal opposition as by technological challenges in reducing carbon emissions, several speakers at POWER magazine’s inaugural conference on legal issues in the generation industry noted on Dec. 7 in Las Vegas.

“Navigating Legal Implications of Power Industry Regulations” brought a variety of legal experts as well as EPA General Counsel Avi S. Garbow together to address a number of recent federal regulations, but the CPP loomed largest.

Discussing the opening round of litigation against the CPP, Allison Wood, a partner with Hunton & Williams, noted there are signs the U.S. Supreme Court is beginning to view the EPA’s actions with a more skeptical eye. “Is the Supreme Court showing stricter scrutiny of the EPA, and will that matter?” she asked rhetorically. Wood urged attendees to pay close attention other EPA cases before the CPP finally reaches the court in a few years.

Wood, who was part of the team of lawyers representing the utility sector in the landmark case of Massachusetts v. EPA that opened the door to carbon dioxide regulation, suggested the court does not see that case as an open-ended license. It’s clear from recent cases, such as Utility Air Regulatory Group v. EPA in 2014 that the court is mindful of not letting the EPA stray beyond its statutory authorization in regulating emissions.

That is significant, Wood said, because of the arguments CPP opponents are making that the plan is outside the EPA’s authority under the Clean Air Act (CAA).

One element Wood noted is that the final rule significantly changed the goals for a number of states from the initial proposal. In general, coal-heavy states—nearly all of which are suing to overturn the CPP—were given stricter goals, while states more reliant on gas and renewables had their goals relaxed. That included states such as California that are vocal supporters of the CPP.

To date, Wood said, 27 states are challenging the rule, 28 petitions for review have been filed by 116 different petitioners, 10 motions to intervene (both for and against the CPP) have been filed by 56 different entities, and nine stay motions are pending, in support of which 84 declarations have been filed. A decision on the request for a stay is expected from the District of Columbia Circuit in late January or early February.

Two issues are being raised in the challenges. The first is whether section 111(d) of the CAA gives the EPA authority to regulate power plants. In this, there is some tension in the language of the statute as a result of multiple amendments in the 1990 revisions. The second issue is whether the EPA has authority to require anything other than increased plant efficiency as a “best system of emission reduction.” If not, its second and third “building blocks” in the CPP (more gas-fired generation substituted for coal-fired generation and changes in the power mix to more renewables) may not be lawful.

Svend A. Brandt-Erichsen, managing partner of Seattle firm Marten Law, noted what he called the “big idea” behind the CPP. The EPA sees fuel substitution between coal, gas, and renewables taking place every day across the grid for economic reasons. What it wants to do is interpret “best system of emissions reduction” in the CAA to require the same sorts of dispatch choices for environmental reasons.

“EPA reads ‘system’ to encompass virtually any ‘set of things’ that reduce emissions, including substituting lower-emitting generation,” he said.

Wood predicted the Supreme Court would likely not issue a decision on the CPP until 2019, unless the case is expedited. A decision from the D.C. Circuit could come in 2017.

Fork in the Road Ahead

Patrick Ferguson, a partner with Davis Wright Tremaine, noted that much of the future of the CPP depends on state choices for compliance and whether they decide to submit a plan at all.

States that submit a State Implementation Plan (SIP) will have the most control over how to approach compliance. He noted that several of the states suing the EPA have nevertheless begun work on their SIP.

But local political opposition is so intense in some states that SIPs may not be feasible—or even legal. Several state legislatures have passed or are considering measures barring regulators from submitting a SIP. For those states, regulators may have no choice but to accept a Federal Implementation Plan (FIP).

For states designing a SIP, a choice must be made between mass-based (total emissions reductions) or rate-based (statewide pounds CO2/MWh) goals. Rate-based goals are more flexible, Ferguson noted, but mass-based goals may be simpler to implement. The EPA is encouraging emissions trading, but the CPP does not allow trading between states with two different types of goals.

State regulatory environments also affect how the SIPs will work. “State measures plans allow states a lot of flexibility in meeting their goal,” he said. “The problem with that is that state regulators must have the authority.”

Ferguson said multistate approaches are likely to be more efficient and effective in the long run, based on existing experiments with the approach, such as the Regional Greenhouse Gas Initiative (RGGI). Existing trading programs like RGGI are actually well ahead of the curve and on track to meet the CPP goals by 2020. California, as a result of its aggressive renewable portfolio standard (RPS), will also be well beyond its goal by 2030. That will leave these states ample room for trading with other states.

One problem with a multistate approach, however, is that it will be complicated by local politics, requiring cooperation between multiple state and federal agencies.

Brandt-Erichsen also noted the potential for some significant interstate tensions. He discussed the examples of Oregon, Washington, and Montana. The first two states support the CPP, while Montana is suing to block it. Oregon and Washington each have only one coal plant that will soon shut down (Boardman in Oregon by 2020 and Centralia in Washington by 2025). Both states have enough other renewable and gas-fired capacity to survive the closures, which also gives them enough room under their goals to build new generation.

Montana, by contrast, has several large coal plants and a steep 47.4% emissions reduction goal. The retirement of PPL’s J.E. Corette plant this year will help, but Montana still needs to make steep cuts in its coal generation, mostly at the 2-GW Coalstrip plant. But there’s a problem for state regulators: The largest share of the obligation for reductions will fall on the Oregon- and Washington-based utilities that own and operate most of Coalstrip’s capacity, Brandt-Erichsen noted.

Some states like Oregon and Washington may see sufficient renewables growth to meet the targets, but that won’t be the case everywhere. Brandt-Erichsen suggested the EPA’s projections for growth were “highly optimistic.”

“What happens if renewable energy growth is not enough to meet the demand?” he asked.

Jim McTarnaghan, a partner with Perkins Coie, offered an observation that he suggested explains much of the texture of support and opposition to the CPP. A map of the states suing and supporting the plan, when colored red and blue, looks very familiar (Figure 1). “The litigation map looks a lot like the state-by-state maps of the last two presidential elections,” he said. 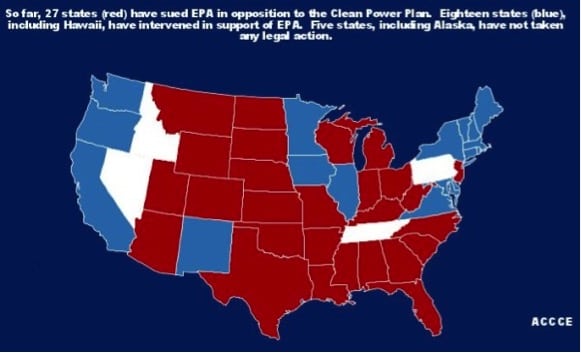 States that support the plan, like California, tend to have some things in common: aggressive RPSs, gas-heavy power mixes, and voters who are sensitive to climate change issues and support measures to address it. States opposing the plan, by contrast, tend to be coal heavy and populated by voters who are concerned about impacts on coal industry jobs. There’s a real sense in the “anti” states that the rule is not being applied equally and fairly, he noted.

All four panelists agreed that some level of interstate cooperation was inevitable given the degree to which the CPP encourages it. The FIP—likely to be imposed on many states—Ferguson noted, is “trading ready,” meaning that even states in opposition to the plan may end up having little choice about participating in regional solutions.