Just as reports emerged earlier this year that NASA had abandoned, for lack of financial resources, its research into space-based solar power that would be harnessed via orbiting solar arrays beaming microwaves to earthly receivers (Figure 7), California’s Pacific Gas & Electric Co. (PG&E) wrote the California Public Utilities Commission (PUC) requesting its approval of a power purchase agreement from a similar technology. 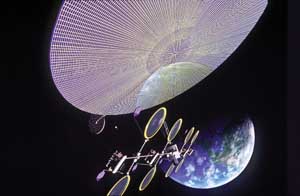 7.    Reaching for the stars. Pacific Gas & Electric asked the California Public Utilities Commission this April to approve a 200-MW baseload power purchase agreement it made with Solaren for space-based solar power. Solaren’s technology proposes to collect solar energy via a satellite in space, convert it into radio waves, and beam it to Earth. The idea is not new: The Department of Defense and NASA have been studying it for years. Both have said at some point that it is not economically feasible. Source: NASA

The utility requested that the PUC consider the 200 MW of power purchased from Solaren’s new space solar power project, anticipated for completion by 2016, as eligible for its Renewables Portfolio Standard (RPS). It said Solaren’s "breakthrough technology" could provide baseload power from a space-based technology that collects solar energy as it travels in a geosynchronous orbit. The energy would then be converted into radio frequency power via a high-efficiency generator such as a magnetron or solid state power amplifier, and then be transmitted from the satellite’s antenna to a receiving station in Fresno County, Calif. The primary obstacle would be the "engineering challenge" — not the technology — of building the space-based plant and the space solar power (SSP) satellites, which are much larger than current kW-class communications satellites.

The only fuel-type hindrances the project would experience are brief blockages of sunlight (from a few minutes to an hour around midnight) on its solar arrays by Earth during the spring and fall equinox periods, PG&E told the PUC.

It also said the technology was fairly mature, owing to 40 years of research in the U.S. by NASA and the Deapartment of Defense. "Space solar technology is based on components that are in use today or being developed for use with satellite communications, radar systems, and other applications," the utility wrote. "Consistent with its designation as an emerging technology, these components must be engineered, tested, manufactured and integrated into large-scale SSP satellite and ground system architectures."

The only aspect that PG&E did not chronicle in its letter to the state regulator were the costs involved, though it noted that the RPS statute required utilities to procure the "least cost, best fit" eligible renewable resources.

So how much could space power cost, and has it become more economically feasible since NASA first studied it in the 1970s? NASA had then estimated it would cost $300 billion to $1 trillion to deliver the first kilowatt-hours to the ground. In 2007, when the Pentagon laid out a roadmap for a 10-MW space-based power demonstration, it suggested the project could be tested as soon as 2012. It concluded that significant technological progress had been achieved, making the approach more straightforward — but it would cost up to $10 billion, it said.