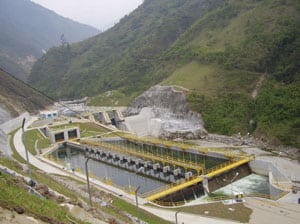 Yuncán , which is powered by the Paucartambo and Huachon Rivers, has a catchment area of about 500 square miles and a 678,000-square-foot reservoir. The plant has two intake dams (one floating and one concrete-gravity) and an 18-mile waterway. The control center, which also houses three 44.5-MW generators from Toshiba, is underground. But Paris-based Alstom installed the generators and other electrical equipment. VA Tech Escher Wyss (Ravensburg, Germany) supplied the plant’s three vertical-shaft, single-runner, four-nozzle, Pelton turbines, along with the injector pipes and protection. As part of the project, 30 miles of new 220-kV transmission lines and several substations were built between Yuncán and Carhuamayo to connect to the national grid.

The plant, which cost about $260 million, was financed by a loan (from the Japan Bank for International Cooperation) and local funders. Peru is barely self-sufficient in electricity production, generating 21.7 million MWh annually while consuming 20.2 million MWh. Roughly half of the country’s installed capacity of 6 GW comes from hydro stations, with the rest provided by oil- and diesel-fired plants.

Most of Peru’s generating capacity links to the national grid SEIN; the remainder is owned by self-producers. The country is one of five member countries of the Andean Community, a group that is moving toward a European Union–style single market. One of the aims of the Andean Community is to integrate electricity markets. Peru has been integrating its power grid with those of Colombia and Ecuador.