From the onset of the civilian nuclear era (marked by President Dwight Eisenhower’s "Atoms for Peace" speech to the United Nations in 1953), there has been a strong awareness of the importance of safety within the nuclear energy industry. Western experts have devoted much time and effort to ensuring the integrity of reactor cores and facility containment. The only major accidents in the history of civilian nuclear power — Three Mile Island in the U.S. (1979) and Chernobyl in Ukraine (1986) — are offset by more than 12,700 cumulative reactor-years of safe commercial operation in 32 countries.

Global cooperation on nuclear safety issues is now widespread. In 1996, the U.N.’s International Atomic Energy Agency (IAEA) ratified the Convention on Nuclear Safety. This was the first international legal instrument to establish mandatory benchmarks for nuclear plant siting, design, construction, operation, resourcing, assessment, and verification of safety, quality assurance, and emergency preparedness. All countries with operating nuclear power facilities are party to the convention and are expected to bring their plants up to the latest IAEA standards.

Some 439 commercial nuclear power plants around the globe now supply upwards of 16% of the world’s electrical energy needs. Most of them produce steam-driven electric power from uranium-fueled reactors. The majority are high-pressurized, "cold-water" units; others use boiling water at lower pressures. In addition, some 240 research reactors are currently being used to generate radioactive materials for scientific and defense purposes. (Four hundred more of these have either been shut down or decommissioned.)

Regardless of the type of reactor, an integral part of safety assurance is the mitigation of facility aging. Originally designed for 30- to 40-year operating lives, the systems, structures, and components (collectively known as the SSC) of nuclear plants can change with time or use. Some components simply wear out, corrode, or degrade. Instrument and control systems may become obsolete as newer technologies evolve. Complicating the issue further, the properties of critical materials may also change through heat and neutron irradiation.

Identifying and correcting such longevity issues can extend the operating license of a plant by several decades, which is why the upgrading of older facilities is now a major focus of nuclear regulatory bodies and plant operators everywhere. At the same time, the newest facilities are being held to the highest standards of quality to ensure a lifetime of safe operation.

"The structural integrity and operational management of nuclear facilities must be secured far into the future — whatever the type or age of the plant," says Wolfgang Hienstorfer, head of the department of structural analysis at TÜV SÜD ET, a leading global technical service corporation, located in Filderstadt, Germany.

Hienstorfer’s team independently tests, inspects, and certifies nuclear facilities for licensing by the German government. He is also chairman of the advisory group on nuclear facility aging management for Germany’s Nuclear Safety Standards Commission, as well as a technical consultant to the IAEA on nuclear facility aging. Many recommendations that he has developed during two decades of work at TÜV have been incorporated into existing international standards. "On behalf of the regulatory bodies, we encourage the power utilities to follow the latest relevant research findings, whether they are maintaining an older plant or designing and building a new one," he says.

For accurate evaluation of nuclear plant SCC, Hienstorfer’s group employs Abaqus finite element analysis (FEA) software from SIMULIA, the Dassault Systèmes brand for realistic simulation. "Abaqus is a very useful and powerful tool for many aspects of our work," says Hienstorfer (who also used it for aircraft crash analysis as a young engineer at Germany’s equivalent of NASA). "The processes of sensitive industrial facilities are very complex, and FEA helps us evaluate the safety margins in a more sophisticated way."

TÜV uses Abaqus to analyze stress loads over a wide range of scenarios such as rapid temperature and/or pressure changes, airplane impact, earthquakes, and radiation embrittlement. The software analyzes everything from key mechanical components — including pumps, piping systems, vessels, supports, and tanks — to fuel assemblies, building structures, and lifting devices such as cranes.

Modern nuclear plants are extremely well built to protect the facility from exterior damage: Thick concrete shells can withstand aircraft impact, while plants in earthquake zones are strongly buffered against seismic activity. An ongoing interior focus of regulators today is the reactor pressure vessel (RPV), the steel heart of the power plant that houses the nuclear fuel rods.

A nuclear power plant using fission to produce steam that drives electric generators is subject to temperature and pressure stresses similar to those at any other kind of steam facility. But the possibility of pressurized thermal shock (PTS) affecting a radiation-embrittled RPV is unique to the nuclear industry. This is because bombardment from neutrons can, over time, alter the molecular makeup of the metal from which an RPV is built. This makes the vessel more prone to structural damage under stress. In a classic loss-of-coolant (LOC) accident scenario, a broken pipe in the primary system deprives the reactor core of vital coolant, and the hot vessel (at 300C) is then subjected to extreme PTS as colder water (at 30C) is rapidly piped into the vessel to cool the core and shut the reactor down.

IAEA standards require that RPVs have a proven ability to withstand this kind of event in order to receive certification (and also recertification at regular intervals) for operation. "You have to document the damage tolerance of the systems, structures, and components of a plant to pass inspection," says Hienstorfer. "FEA is an integral part of that analysis."

FEA can be used for virtual testing to provide guidance for new designs in the early stages of product development as well as for performance assessment of existing components under simulated stress conditions.

A typical FEA analysis of an RPV takes into account temperature transients, internal pressure fields, and the radiation embrittlement behavior of the vessel during a simulated LOC event. (The case described here is taken from an actual evaluation by TÜV at the recertification of a power plant in Germany.) The simulations examine stresses both at vessel walls and at entry points of the hot and cold water nozzles feeding into the RPV (Figure 10). 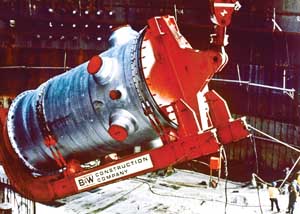 10. Nozzle flow. An exterior view of the nozzles (with red caps) through which hot and cold water circulate into and out of a nuclear reactor pressure vessel that houses the fuel rods. Courtesy: Westinghouse

To create their FEA evaluation models, TÜV engineers first obtained component condition data for the vessel and nozzles from nondestructive x-ray and/or ultrasound testing. "You must verify the initial condition of the RPV before setting up your models," says Hienstorfer. Every vessel is plant-specific. In the case described here, the material was ferrite steel coated with austenitic cladding to prevent the load-carrying ferrite layer from corrosion. The embrittlement of the metal over time was represented by end-of-life calculations based on existing data from irradiated material.

Next, Abaqus/CAE was used to build and mesh computer models of the vessel and the four water pipe nozzles that fed into it. Using larger, linear hexahedral elements reduced computation time for solving the global model (Figure 11), while smaller, quadratic hexahedral elements were used in the submodels (Figure 12) for more accurate depiction of stresses at the edges of nozzles. The global model had 22,650 elements and 76,650 degrees of freedom (DOF), whereas a typical submodel contained 10,900 elements with 144,000 DOF. 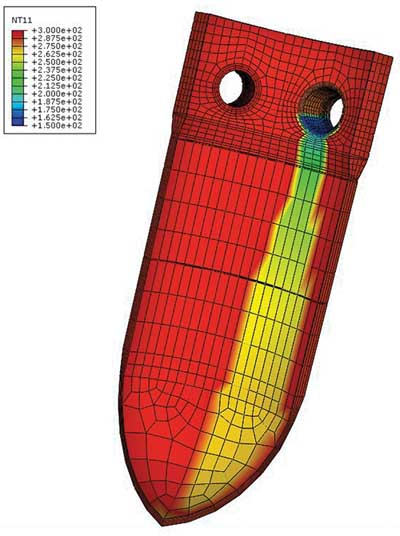 11. Shock treatment. This is a one-fourth cutaway view of a reactor pressure vessel at the start of a pressurized thermal shock simulation by TÜV, using Abaqus FEA from SIMULIA. The vessel, which normally operates at 300C (indicated in red), is shown as cooler water (30C) begins pouring in through the nozzle on the top right. (Units are degrees Celsius.) Source: TÜV 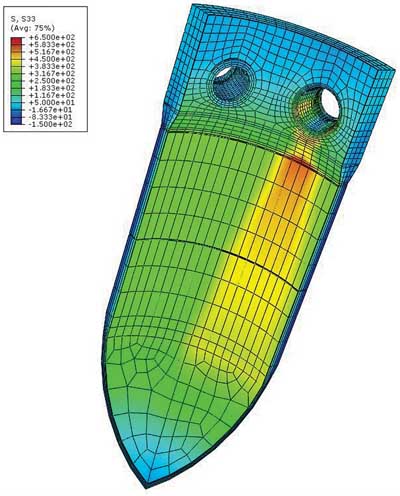 12. Thermal shock wave. This Abaqus FEA half model of a reactor pressure vessel shows the nozzle opening (shown as holes in Figures 11 and 13) through which cold water is quickly introduced to shut down the reactor, resulting in pressurized thermal shock. TÜV requires virtual testing of nuclear power plant components as part of the certification process. (Units are degrees Celsius.) Source: TÜV

With their FEA models set up on a Dell Workstation PWS670 with a 3 GHz Xeon CPU, the TÜV team then used Abaqus/Standard for linear elastic simulation of the rapid cooling of the vessel, calculating the effects of a large increase in the tensile stresses on the inner vessel wall. This increase is the result of two phenomena.

First, the thermal conductivity of the two materials (cladding and base) is different, so each reacts differently to the rapid temperature change. Second, the emergency injection of colder water creates a temperature plume (temperatures inside the plume are significantly lower than those outside) that produces significant stress buildup at its leading edge (Figure 13). 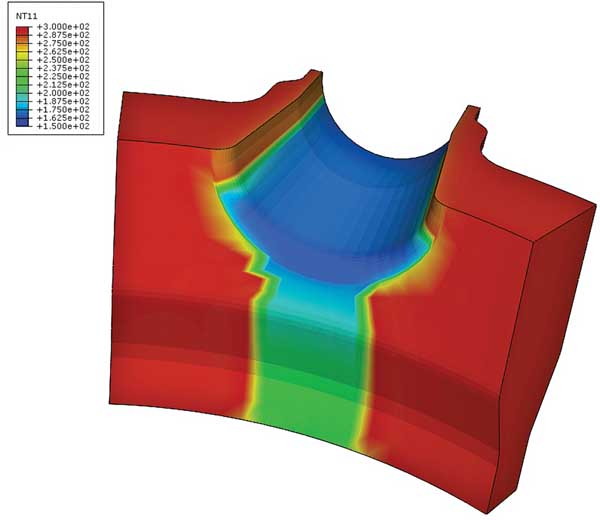 13. All stressed out. The same reactor vessel as shown in Figure 11, but further into the pressurized thermal shock simulation, shows the stress distribution on the inner wall of the reactor pressure vessel (from red to blues and greens. (Units are degrees Celsius.) Source: TÜV

In addition to the simulation of such rapid temperature fluctuations, the effect of the high pressures under which the system would be operating was incorporated into the models. An elastic/plastic Abaqus simulation completed the virtual testing of PTS and predicted where the greatest surface and/or volumetric stresses would occur in the system. An average time transient for a full simulation was 8,000 seconds. The simulations were run well beyond the required tolerance levels, all the way to the point at which cracking would occur; such additional data are useful for fracture mechanics analyses and can be used in the future by inspectors, says Hienstorfer.

The RPV in the example discussed here passed TÜV’s simulation testing, validating that its walls and nozzles would withstand the extreme conditions of a LOC event over the 40-year lifespan of the facility. "The Abaqus FEA calculations helped evaluate compliance of the vessel with regulatory safety requirements," says Hienstorfer.

The successful design, development, and lifetime maintenance of nuclear power facilities is a challenge that must be carefully managed from both an organizational and an engineering viewpoint, says Hienstorfer. He sees FEA as having an integral role to play in both operational evaluation and ongoing monitoring of nuclear facilities to assist in complying with regulations designed to ensure that the world’s growing energy needs can be met safely.

"We depend on FEA for computer modeling and virtual testing of reactor pipelines, vessels, and materials under extremes of stress and time," he says. "It definitely provides guidance to engineers to build both safety and longevity into their nuclear power plant designs."