Environmental regulations and a need to reduce its fuel consumption provide the incentive for an Egyptian plant to change its manufacturing process.

Energy companies constantly grapple with controlling the emissions levels and fuel consumption of their power generation units. Running an efficient plant means getting the most out of your fuel source. Expanding environmental regulations worldwide have brought the need for reductions in carbon dioxide (CO2), sulfur dioxide (SO2), and nitrogen oxides (NOx), among others.

It’s a discussion many people associate with large power plants. But the problems of fuel efficiency and pollution also are faced by smaller generators, including industrial facilities that produce their own power. In some cases, addressing the issue requires an overhaul of the way a facility generates its electricity.

The El Nahda cement factory (Figure 1) in Qena, Egypt, part of El Nahda Industries Co. (NIC), wanted to address both its fuel consumption and its emissions. Cement, an ingredient in concrete—although the terms are often used (incorrectly) interchangeably—is made through an energy-intensive process. The process needs fuel to generate the extreme heat (1,000C and higher) required in the kiln to produce cement clinker (the binder in many cement products). It also requires electrical energy to run other systems, such as the cement grinder. Generating that energy brings with it emissions—a study by Columbia University said the cement industry accounts for about 5% of global emissions of CO2, and researchers have said direct and indirect emissions from the process could put that total as high as 8%.

The El Nahda plant, which came online in 2012, had a goal to “minimize energy consumption from [traditional fuel] and [reduce] fuel combustion emissions,” according to Mohamed Abdel Moaty, the plant manager who discussed the project with POWER. It needed to develop a plan for using an alternative fuel, ideally at least “20% alternative fuels from the total plant fuel consumption,” he said. The plant needed the fuel to improve its efficiency and reduce emissions “due to the [government’s] environmental obligation and [for] complying with the requirements of ISO 50001:2011.”

ISO 50001:2011 is a standard for energy management from the International Organization for Standardization (ISO). The standard, according to ISO, “specifies requirements for establishing, implementing, maintaining, and improving an energy management system, whose purpose is to enable an organization to follow a systematic approach in achieving continual improvement of energy performance, including energy efficiency, energy security, energy use, and consumption.”

For El Nahda, meeting the ISO standard and reducing its fuel consumption meant the factory needed to reinvent its manufacturing process.

Cement production releases CO2 and other pollutants directly and indirectly—directly through the heating of limestone and the occurrence of calcination, which occurs when limestone (made of calcium carbonate) is heated and breaks down into calcium oxide and CO2. Calcination accounts for about 50% of all the emissions from cement production, according to industry analysts. Indirect emissions come through the burning of fossil fuels (coal, in El Nahda’s case) to heat the kiln, and any emissions from the cement production.

The El Nahda plant generates about 8 MW of thermal energy for its operations. Abdel Moaty said company officials realized improving the plant’s fuel efficiency and reducing emissions—and doing it while also producing different types of cement—would be best achieved through a team approach for finding the right alternative fuel, all while controlling costs by using the infrastructure already on-site in Qena (Figure 2).

The project had plenty of incentive to succeed, certainly regarding emissions’ reduction. Egypt—officially the Arab Republic of Egypt (ARE)—is among a group of countries in the region that has experienced rapid growth, and that growth is expected to continue, which means the need for more cement to make more concrete to build more roads, bridges, and other infrastructure. It also means more pollution, which the government is taking steps to control, in part to save many of the country’s antiquities in a region where civilization dates past 3,000 B.C. The country’s Environmental Affairs Agency has said industry contributes to much of the nation’s air quality problems; the World Bank has said the air in Cairo, the capital city, is among the worst in the world when it comes to particulates damaging to human health. 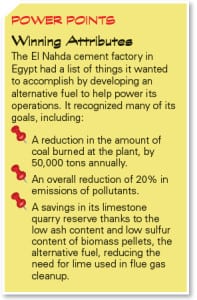 The cement industry is one of the oldest sectors in Egypt. Almal News said the first business began operating in 1911—the country has several shale and limestone quarries to provide the raw materials for cement production—and Egypt is among the 15 largest producers of cement worldwide, with more than 20 operating plants.

The NIC blueprint for the El Nahda plant as told to POWER was such: “To reduce the ‘energy consumption’ and the ‘combustion emissions’ in the cement production, developing projects for the use of such alternative fuels is of utmost importance. NIC has to use about 20% alternative fuels from the plant fuel consumption due to the environmental obligation of the governorate of A.R.E.”

The plant’s project team—comprised of Abdel Moaty, the NIC plant manager; Mohamed Hamada Ali, the NIC section head of technical office and preventive maintenance; Mohamed Elsayed Mohamed, NIC laboratory and quality control manager; and Ahmed Ali Ibrahim, NIC laboratory and quality control engineer—went to work, tasked with a number of goals, ultimately leading to a proposal to use biomass pellets as an alternative fuel for the plant.

Refuse-derived fuels (RDFs)—which can be further specified into tire-derived fuels (TDF) from used tires, or solid recovered fuels (SRF), usually commercial and industrial waste—and biomass-derived fuels are being more widely used in the cement industry, particularly as producers look to reduce emissions and move away from coal, natural gas, or fuel oil to power their kilns. The Cement Sustainability Initiative (CSI), part of the World Business Council for Sustainable Development, has brought together a global group of large cement producers who promote the business case for sustainable and environmentally sound cement development. CSI said the use of alternative fuels in cement manufacturing facilities it studied jumped from just 2% in 1990 to about 16% in 2015, during a period in which global cement production rose almost 400%, in large part due to the rapid pace of construction in developing nations over the past 30 years.

As part of its project, the El Nahda team wanted to:

■ Use a byproduct of the food industry as a sustainable fuel to replace fossil fuel in the combustion process.

■ Reduce its fuel cost and reduce carbon dioxide emissions up to 35%.

■ Save the cost of supply and installation of a new plant that could use RDF, SRF, or TDF as an alternative fuel.

■ Recognize the problem of finding RDF, SRF, or TDF fuel in Egypt.

■ Trend toward “zero carbon” to protect the climate.

The El Nahda project’s blueprint provided to POWER said: “Our proposal is based on a technology to use the biomass plant product in pellets form as alternative fuel to replace fossil fuels in the cement rotary kilns. One of the main features of this [product] is that it can be co-ground with coal or pet coke on a conventional coal mill. This allows pellets to be blended with conventional fuels, milled on an existing mill, transported to [the] combustion point using existing fuel transport systems, and combusted using existing combustion processes which means complete homogenization of the fuel mix, which leads to the stability of kiln operation. In other words, [biomass pellets] can be used with existing equipment without the need to invest in new technology.”

The project has worked on many levels. The cement plant has been able to avoid many of the costs that would have been associated with the project, since much of the infrastructure required already was on-site with the existing coal system—the handling, grinding, and dosing facility. A storage area for biomass pellets also was available. Use of the existing coal system also has alleviated additional costs for operations and maintenance.

The project team said the biomass pellets cost about $80 to $100 per ton on the global market, depending on required quantities and quality. At present, the plant uses organic pellets that are a byproduct of sugar—the sugar industry is another big business in Egypt, dating back to the year 710—and El Nahda contracts with companies to ensure its supply. Current plans call for the use of about 100,000 tons annually, eventually rising to about 150,000 tons.

Hamada Ali said use of the pellets has brought a 20% reduction in the plant’s use of coal—from 250,000 tons annually to about 200,000 tons—along with a 10% drop in CO2 emissions and about a 15% reduction in SOx emissions. Other pollutants have dropped as well. Hamada Ali also said there was a “saving in electrical power consumption of [the] coal mill due to [the fact] the mix (biomass and coal) is easy to grind, more than pure coal.” He said consumption was about 50 kWh/ton prior to the project and is now about 45 kWh/ton. Meanwhile, the plant has increased its kiln output from 5,500 tons/day of cement to 6,300 tons/day.

“This may be a new technology in [the] usage [of] alternative fuels which can meet [the] requirement of applying the replacement of fossil fuels with alternative fuels in [a] wide range in Egypt,” said Hamada Ali, “which [is] essentially based upon how we can provide the required quantities we need from the biomass manufacturing companies.”■