Increasing uncertainties concerning low forecasted load; construction financing constraints and reversals; state certification hurdles; and challenges to nuclear profitability posed by the growing share of coal plants beset the nuclear industry in the early 1970s. The nuclear suffered a renewed economic meltdown and fierce public pushback in the aftermath of the Three Mile Island accident in 1979. By 1983, these factors prompted the delay or cancellation of 100 nuclear units—nearly 45% of total commercial capacity previously ordered. An estimated $10 billion (in mid-1982 dollars) had been spent on the scrapped projects. Mounting public opposition from Chernobyl and new safety rules required after Fukushima also affected a number of later projects.

A supplement to POWER‘s February 2018 THE BIG PICTURE print infographic, this interactive map offers a sampling of nuclear plant projects that have been abandoned. Double click on the map to activate the zoom function. Click on “Map Overview” to zoom out. Scroll down for an overview. Note: All dollar figures are from the corresponding year. Source: NRC 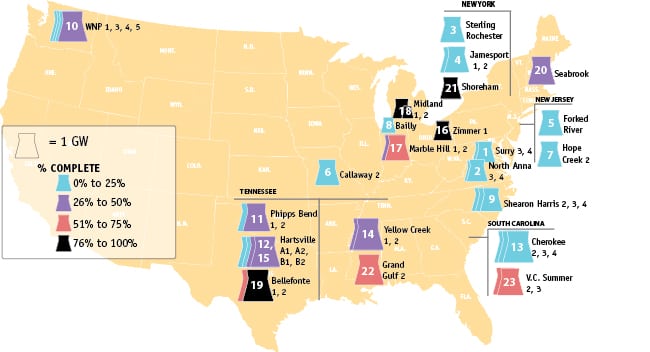 1977: Surry 3 and 4 (each 882 MW)—Power demand fell dramatically from 1972, when Surry 3 and 4 were planned by Virginia Electric & Power Co. (VEPCO) northwest of Newport News, Virginia, through March 1977, when the units were canceled. VEPCO, which also cited construction delays caused by labor problems, intervention of environmentalists, and tighter NRC controls, said the company had invested $53 million in the projects and had contracts for another $93 million (1977 dollars).

1980: North Anna 4 (907 MW)—In the wake of Three Mile Island, VEPCO abandoned the project when it was only 4% complete. Abandonment of Unit 4 cost it $155 million (1980 dollars). The company had reportedly spent $485 million to build Unit 3 (abandoned two years later) and 4 at North Anna at the time. In 1982, when it scrapped Unit 3 because of a sharp increase in construction costs, VEPCO sought rate increases to cover an estimated $540 million write-off.

1980: Forked River 1 (1.1 GW)—Jersey Central Power & Light halted construction at this project in 1974 owing to financial cutbacks and protests, but it resumed construction only to abandon the project which was 5.6% complete owing to “financial difficulties” stemming from the Three Mile Island accidents, and also, uncertainty about whether the NRC would grant a license or put in place costly regulations.

1981: Hope Creek 2 (1.1 GW)— Public Service Electric & Gas scrapped the unit when it was about 19% complete, but pressed on with Hope Creek 1. The $3.79 billion Hope Creek 1 was already plagued with soaring cost overruns, up from $600 million initially estimated for both units.

1982: Washington Nuclear 4 and 5 (1.2 GW each)—Unit 4 was 25% complete and Unit 5 17% complete when Energy Northwest’s predecessor Washington Public Power Supply System halted construction at the two units after it failed to sell enough bonds to complete five reactors needed to meet projected power in the Pacific Northwest. Abandonment of the two units alone led to the company’s defaulting on $2.2 billion in municipal bonds. Total costs for all five units planned at the site was estimated to exceed $24 billion.

1982: Phipps Bend 1 and 2 (1.2 GW each)—The Tennessee Valley Authority’s (TVA’s) board voted to stall construction of Unit 1, which was 29% complete, and Unit 2, 5% complete owing to slacker power demand as aluminum plants in the South closed down. Abandoning the project cost the TVA about $1.2 billion. The site in 2017 became home to a 1-MW solar farm.

1984: Zimmer 1 (810 MW)—When Cincinnati Gas & Electric Co. announced cancellation of the project to convert it to a coal plant, it was 97% complete and had so far cost $1.6 billion—up from a the $240 million originally estimated. The decision to scrap the project was rooted in estimates that completing the project would cost an additional $1.5 billion and two more years of construction to satisfy new requirements from the NRC. Just months before, the federal regulatory body repudiated its own probe into a pipe-weld problem at Zimmer, alleging “incompetence” after a whistleblower—29-year-old Thomas Applegate, a private investigator hired by the utility to check possible time-card padding at the plant—brought to light that the NRC’s regional office of inspection and enforcement had never inspected the defective welds in safety-related systems. While Applegate alleged a cover up by the NRC, the NRC rejected its own overall finding, deeming the investigation “unsatisfactory.” Ultimately, it halted construction on several parts of the plant after finding fault with project management and for safety violations. Fallout from the Zimmer project struck the nuclear industry widely—specifically for utilities looking to sell bonds to finance new nuclear—as no company had walked away from a costly nuclear project so close to completion.

1984: Marble Hill 1 and 2 (each 1.1 GW)—Public Service of Indiana and part owner Wabash Valley Power Association had already spent $2.5 billion when it announced it was canceling construction of the twin Westinghouse pressurized water reactors. Officials of the public utility cited “realities” of the era’s political environment and financial markets,” [EXTRA QUOTE MARK?] along with delays in rate hearings for reasons leading to the cancellation. Reports, however, also point to soaring cost overruns: In 1973, the project was estimated to cost $1.4 billion, and by 1984, completion would have cost $7 billion, prompting the company to declare a cash emergency. At the time, the half-finished project was the most expensive nuclear project ever to be abandoned.  Unit No. 1 of the 2,260-MW plant is 56% complete, Unit No 2 is 33% complete.

1986: Midland 1 (818 MW) and 2 (492 MW)—After 17 years of sporadic construction, hearing and protests, and after project partner Dow Chemical pulled out of the project, Consumers Powers Co.’s board of directors voted to abandon the two reactors in Michigan—even though the project was 85% complete. At the time, the board cited changing safety rules, which it blamed for costly delays, and a refusal by some of Michigan’s major industrial consumers to agree to rate increases. Some critics also alleged project mismanagement. Consumers had spent $4 billion on the two reactors when it abandoned the project. In 1987, it began converting the plant to a natural gas–fired cogeneration facility, and in 2009, after years of high natural gas prices, the company sold its stake in the Midland Cogeneration Venture to New York–based Fortistar.

1988: Bellefonte 1 and 2 (1.2 GW each)—TVA’s board suspended the project when Unit 1 was 88% complete and Unit 2, 58% complete, after a combined $6 billion investment. TVA considered completing the project in 2010, but it ultimately sold the site in November 2016 to Nuclear Development LLC, a firm that has sought federal loan guarantees to complete the project.

1988: Seabrook 2 (1.2 GW)— Public Service Co. of New Hampshire canceled plans for the second of two reactors planned at Seabrook. Unit 2 was 25% complete and the utility had spent $800 million on the project. Unit 1 was completed in 1986.

1989: Shoreham (820 MW)—The Shoreham Long Island Lighting Co. (LILCO) fully completed this GE BWR in 1984, but considerable public opposition after Three Mile Island prompted Suffolk County officials in New York to determine that the county could not be safely evacuated in the event of a serious nuclear accident at the plant. Even though the company received federal permission for low power tests in 1985, the states declined a company-sponsored evacuation plan, effectively barring it from ever opening. In 1992, the Long Island Power Authority bough the plant from LILCO (for $1), and it was fully decommissioned in 1994. In 1965 when LILCO first announced plans for the plant, it said it could be completed by 1973 at a cost of $75 million; by the late 1970s, after LILCO decided to increase the size of Shoreham from 540 MW to 820 MW, costs soared to $2 billion; and by the 1990s, ratepayers were saddled with an enormous price tag of $6 billion for the project, which never produced commercial power.

1990: Grand Gulf 2 (1.3 GW)—Though planned in the 1970s when regional demand for power was rising sharply every year, in 1986, Middle South Utilities—Entergy’s predecessor— suspended construction of the project where work had begun in 1975 after state regulators denied the company’s request for rate increases to pay for the project. Citing a massive debt load and political imbroglio, and though the project was 66% complete and one unit at the plant had been placed in commercial operation in 1985, the company scrapped the project in 1990.

1995: Washington Nuclear 1 (1.3 GW) and Washington Nuclear 3 (1.2 GW)—Only one of five reactors planned by the Washington Public Power Supply System was completed (Columbia Generating Station, in 1984) but the remaining unfinished plants were mothballed against the possibility that construction would be resumed. In 1995, the projects were formally terminated. The company, renamed as Energy Northwest, asked the NRC to extend the construction permit for Unit 1 to 2001, but in 2005, it determined again that the construction permit was no longer needed.

2017: V.C. Summer 3 and 4 (each 1.1 GW)—SCANA Corp. and its partner Santee Cooper scrapped two AP1000 reactors that were 64% complete, claiming completion would cost $9.8 billion. The project, whose construction began in 2013, was dogged by costly delays stemming in part due to new safety rules implemented in the wake of the 2011 Fukushima disaster. In early 2017, delays at the project and two other AP1000s under construction in Georgia forced contractor Westinghouse to declare bankruptcy. The partners spent $9 billion on the project they estimated could cost up to $24 billion to complete.