The cabinet of Angela Merkel’s ruling coalition has endorsed changes to the German electricity market, ensuring their passage into law.

The law, dubbed “Electricity Market 2.0,” relies on market mechanisms to foster competition between electricity generation and flexibility options, rejecting generator proposals for an American-style capacity market. It requires greater accountability from “balancing responsible parties,” brokers who ensure that the energy needed by their clients is actually available. And it creates two pools of extra capacity—including a controversial early retirement bonus for lignite power plants.

“This will enable the future electricity market to deliver security of supply in the face of growing shares of renewable energy,” the ministry reported, announcing the agreement on November 4. Germany has a goal of 80% renewable electricity by 2050.

The plan has 20 proposed measures (Figure 1), but Christoph Maurer of Consentec GmbH, who advised the ministry on the reforms, highlights three main features. 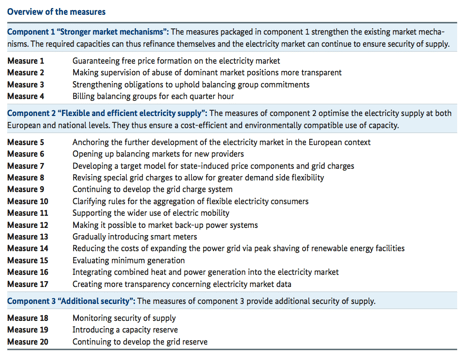 First, he says, the government vows not to impose price caps, so generators can recover costs during periods of peak demand. Second, greater flexibility will be encouraged through international trading, real-time prices, demand response, and other measures. And third, two pools of extra capacity are created for power plants that operate only when called in emergencies.

Traders will be responsible for meeting the loads of their customers and will face fines of up to €20,000/MWh if they don’t fulfill their obligations. More market players will be able to participate in the balancing function, such as battery storage, electric vehicle charging, and factories using demand response.

“These details will be very important but they don’t get as much attention as the capacity market question,” Maurer says.

And as expected, the decision rejects a capacity market, criticizing U.S. policies in the process.

“Creating a capacity market, above all, would lead to a risk of costs spiraling out of control, of government-imposed false incentives, and of disruptions on the electricity market,” Gabriel said, speaking at the convention of the German Association of Energy and Water Industries (BDEW) in July.

“We do not want to interfere in price formation on the electricity markets on a permanent basis. Investors need to be able to continue to rely on this,” he told the audience.

Instead, he spoke out in favor of a market-based design. “I want to go back to a situation whereby the markets send signals of scarcity again—and where these are not undermined by government.”

The white paper goes into more detail on the reasoning. “Capacity markets are susceptible to design error,” it argues. “These errors can result in substantial costs.”

Regulators must make long-lasting decisions about capacity purchases “on the basis of incomplete information and uncertainties,” and will have to “repeatedly fine-tune,” causing ongoing regulatory uncertainty and complexity.

“The example from the U.S. of PJM shows how the degree of regulation can deepen. The capacity mechanism in PJM started relatively simply, but it now embraces a set of rules of 40 guidelines of 600 pages.”

The decision was panned by generation companies.

“The [plan] ignores market developments and endangers supply security in the medium term,” said Ivo Gönner, president of the German Association of Local Utilities (VKU), in a statement released in late August. “The proposals only work in the current environment where we have overcapacity. In the early 2020s, the overcapacities will have vanished. Then we will need new capacities, but these cannot be financed in the system envisaged.”

But it was welcomed by other parties. The Association of Energy Market Innovators (BNE), made up of “grid-independent energy suppliers and energy service companies,” was especially happy.

“The power market of the future will create security of supply through the interplay of millions of connected flexible producers, consumers, storage technologies, as well as electro mobility,” they said in a statement. “Free competition in the power market 2.0 ensures efficient solutions and innovations, thus offering more space for new business models than they’ve had for years.”

Putting Lignite Out to Pasture

The plan creates two extra pools of capacity: a 5% capacity reserve and a “security standby” of older, high-emission lignite power plants. The capacity reserve, with up to 4.4 GW of plants selected by competitive bidding, will be called “when all market-based options on the power market are exhausted,” according to the Ministry.

The reserve “secures the ‘power market 2.0’ like suspenders attached to a belt,” according to the Ministry. They estimate it will cost between €130 and €260 million per year—“much less expensive than a ‘capacity market’!”

The second pool, as reported in POWER in July, will transition eight old lignite coal plants, totaling 2.7 GW, into a “security standby” for four years before they are decommissioned.

“The plants will only be called upon as a very last resort, for example in the case of long-lasting, extreme weather events,” the government says.

This measure will reduce CO2 emissions by up to 12.5 million metric tons in 2020, contributing to a pledged reduction of 40% below 1990 levels. Power plant owners will be reimbursed for lost profits estimated at €1.6 billion, spread over seven years.

The lignite move has been controversial. Andreas Schröter of DNV GL, a consulting firm, thinks it could violate EU rules on fair competition. Specifying lignite plants for the reserve contradicts rules for “technological neutrality,” he argues, and favoring German plants discriminates against plants in neighboring countries. Already Trianel, a collaborative of 100 municipal utilities, is threatening legal action.

The Association of Energy Market Innovators was also critical. “Flexible plants that can start quickly should be eligible for the reserve,” they said. “It must not become a life extension for inflexible fossil plants.”

Christoph Maurer agrees the lignite standby might run into EU problems, and also questions the technical ability of lignite plants to respond quickly to emergencies. “Political compromises tend not to be very beautiful,” he told this writer.

“Minister Gabriel: The foundations are in place for the electricity market of the future,” Federal Ministry for Economic Affairs and Energy (BMWi), November 4, 2015.

An electricity market for Germany’s energy transition, a white paper by the Federal Ministry for Economic Affairs and Energy, July 2015