Five of Germany’s largest lignite power plants will be mothballed to allow the country that is already phasing out nuclear power to meet ambitious climate goals by 2020.

In what it called a “milestone decision,” the government on July 2 agreed to scrap plans to impose a controversial—and by some accounts, illegal—climate tax for conventional power plants in an attempt to reduce carbon dioxide emissions nationwide.

Chancellor Angela Merkel and leaders of her two junior coalition partners instead decided to idle 2.7 GW of lignite coal capacity at some of the nation’s oldest plants. The capacity, which makes up about 13% of Germany’s hard-coal fleet, will be gradually transferred to a newly created “capacity reserve” and decommissioned within four years.

No information was divulged about costs to set up the capacity reserve or how it will comply with European state aid law.

The government also said on Thursday that it would promote energy efficiency, fast-track plans to expand its grid, and ensure decommissioning funds are available to cover Germany’s nuclear exit costs. Measures include providing state aid to owners of combined heat and power (CHP) installations whose economic viability is at risk, promoting the conversion from coal-fired to gas-fired CHP, and prioritizing the use of underground cables rather than overhead power lines.

Concerning securing financial reserves for nuclear power, the Energy Ministry said: “We will ensure that [energy utilities that are responsible for bearing decommissioning costs] remain capable of this in [the] future. In a first step, we will carry out a stress test to assess the financial reserves. In a second step, we will adopt legislation before the end of this year to counteract any possible reductions in the assets held to meet liabilities. Finally, we will set up a commission to draft recommendations by the end of November 2015 showing how the funding for the dismantling and disposal of the radioactive waste can be secured.”

On July 2, Energy Minister Sigmar Gabriel said the power sector had agreed to provide, if needed, additional reductions of 1.5 million tonnes of carbon dioxide a year from 2018. “The legal form in which this commitment will be cast has yet to be decided,” he noted, however.

The agreement reportedly does away with Gabriel’s proposal introduced earlier this year to slap a climate levy on carbon dioxide emissions from conventional power plants to help the government reach its lofty climate goal. As proposed, coal and gas plants older than 20 years would have been required to pay €18 to €20 ($20 to $22) per tonne of carbon dioxide emissions for emissions of more than seven million tonnes.

Germany’s biggest utilities RWE and Vattenfall, as well as conservative lawmakers, pushed back against the so-called “penalty tax,” even though the proposal sought to lower reduction targets for the power sector to 16 million tonnes from 22 million tonnes. Critics argued the levy did not conform to European and German constitutional law, and industry observers had predicted drawn-out litigation if the levy became official.

The Capacity Reserve Is Planned as a Safeguard

According to a green paper on energy transition published last October by the Federal Ministry for Economic Affairs and Energy, the capacity reserve will seek to “safeguard power supply” as part of a planned “optimized” electricity market (Electricity Market 2.0).

On July 3, the ministry published a white paper detailing how it would set up that future electricity market, including the capacity reserve system, in lieu of a previously considered capacity market.  The government will now receive public comments on the paper until September, when the legislative process will begin.

Germany’s electricity market is liberalized and coupled with neighboring markets. But, while this boosts the efficiency of the power supply system, it also contributes to the current overcapacity in the market, the government acknowledges.

And complicating the situation even more: Germany plans to permanently close all its nuclear plants—about 12 GW—by 2022, seeking to replace that power with more renewable sources. 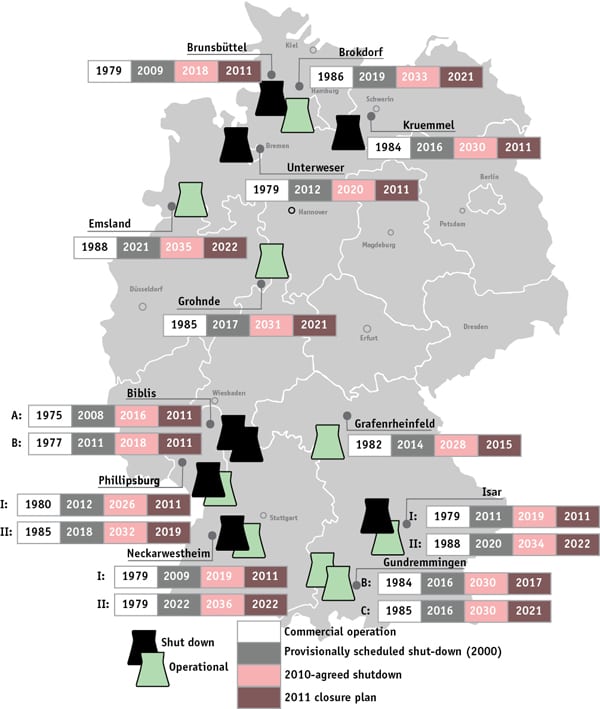 “We are transitioning from a power system in which controllable power stations follow electricity demand to a power system where flexible producers, flexible consumers and storage systems respond to the intermittent supply of wind and solar power. This transition will shape the electricity market in the years ahead,” the government said.