In a move cheered by Ohio officials, FirstEnergy Corp. has announced plans to repower Units 4 and 5 of its R.E. Burger coal-fired power plant to burn biomass to produce up to 312 MW, making the 54-year-old facility one of the nation’s largest biomass power plants and the first biomass plant in FirstEnergy’s generation portfolio (see Figure). 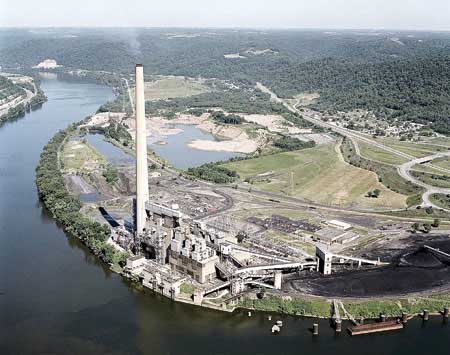 In April, FirstEnergy Corp., owner and operator of the coal-fired R.E. Burger power plant, decided to retrofit Units 4 and 5 to combust biomass. The decision may signal the start of a trend for coal-fired plants in the U.S. Courtesy: FirstEnergy Corp.

The two Burger units had been targeted by the Environmental Protection Agency (EPA) for alleged violations of the Clean Air Act’s New Source Review provisions. Under terms of a 2005 consent decree settling the EPA charges, FirstEnergy faced a March 31 deadline to decide whether to close the plant, install pollution controls to allow continued coal-fired generation, or repower the units to burn biomass.

Company officials said a variety of factors led FirstEnergy to choose the $200 million retrofit option, including the impact on local residents of closing the plant, Ohio’s renewable energy mandate, and the increasing likelihood of future federal carbon regulation.

“Retrofitting the Burger Plant for biomass will expand our diverse energy portfolio even further and continue our support of state and federal efforts to increase reliance on renewable energy sources,” FirstEnergy President and Chief Executive Officer Anthony Alexander said in a written statement.

Ohio Gov. Ted Strickland (D), who joined Alexander in announcing the decision, said FirstEnergy’s move comes at a good time for Ohio, which is one of the states hardest hit by the economic recession gripping the nation.

“This project will help jump-start the biomass renewable energy industry here in Ohio and also serve as a model for projects throughout the United States,” Strickland said. “In addition to retaining jobs at the Burger Plant, this project has the potential to create additional jobs and investments, particularly as biomass fuel suppliers work to meet the needs of this operation and as other renewable energy projects are developed in Ohio.”

When the retrofit is completed, the Burger Plant initially will use wood wastes and other biomass to fuel the facility. FirstEnergy’s goal, however, is to operate the plant as a “closed loop” biomass plant, which means it will use fuel derived from trees grown to serve as feedstock for the biomass fuel, said company spokeswoman Ellen Raines.

As a closed-loop biomass plant, the project would be carbon-neutral. The energy crop trees would act as a carbon sink, storing carbon in the trees’ tissues and roots. When harvested and burned, the stored carbon would be released, but the net carbon footprint would be zero, Raines said.

FirstEnergy has a tentative agreement with Renafuel LLC, a subsidiary of Cleveland-based Cliffs Natural Resources—a global iron mining company—to take fast-growing, bio-engineered cottonwood trees and grasses grown in Ohio and press the biomass into cubes in a new factory Renafuel is building. The cubes will be pulverized and blown into the Burger Plant’s retrofitted boilers in much the same way as coal plants use pulverized coal.

In addition, putting controls on the facility to allow continued coal use would have cost $330 million—more than half again as much as the $200 million cost of the biomass retrofit.

But Raines said a new Ohio renewables mandate played a key role in the decision to convert the plant to burn biomass. The law requires utilities to obtain 12.5% of their power from renewable resources, and at least half of that must be generated within Ohio.

“The renewables mandate was one of the big factors, and with the prospects of [federal] carbon legislation, having a carbon-neutral facility is a real benefit,” she said.

While it’s too early to call it an industry trend, a number of utilities have announced plans or have made decisions to retrofit fossil-fueled plants to use biomass. Over the past three years, Southern Co., Northeast Utilities, Dynegy, Xcel Energy, and DTE Energy have either converted plants or are in the process of doing so.