Demand for renewable power is burgeoning as state governments (and maybe soon the U.S. federal government) impose increasingly rigorous environmental and procurement standards on the energy industry. Surprisingly, biomass cofiring has yet to attract much attention, even though it could help many utilities meet their renewable portfolio requirements, reduce carbon emissions, and solve other regional environmental problems. U.S. developers, investors, and regulators should consider including cofiring as part of the energy mix going forward.

Biomass cofiring is neither a new nor an experimental technology; it is a tested and proven one, vetted by private industry and government agencies both in the U.S. and abroad. Cofiring involves replacing a portion of a coal-fired generating plant’s coal supply with biomass, which is then combusted with the remaining coal to generate electricity. With relatively straightforward, plant-specific modifications — typically involving alterations to fuel-processing, storage, and delivery systems — cofiring can be deployed in nearly all types of coal-fired boilers, including stokers, fluidized beds, pulverized coal boilers, and cyclones.

Once deployed, biomass cofiring can contribute anywhere from 2% to 30% of the total heat input needed for generation, thereby replacing a sizable portion of the typical coal supply.

For that reason alone, cofiring biomass in U.S. coal-fired boilers should be viewed today as a serious option for reducing carbon emissions and as a strategy for meeting a renewable portfolio standard. That rationale was behind FirstEnergy’s decision to go even further and convert two units at its coal-fired R.E. Burger Plant to 100% biomass (see sidebar).

Although in the late 1980s through the 1990s there were many successful field tests at utility installations in the U.S. with support from the National Renewable Energy Laboratory, there has been comparatively little new work over the past decade.

The European Union, on the other hand, has been very actively engaging in retrofitting many central station coal-fired plants to cofire a variety of biomass and waste products, and the number of installations is steadily rising. The world’s largest cofiring project is at the Drax Power Station, in North Yorkshire, UK. The 4,000-MW power station is producing 10%, or 400 MW, from biomass cofiring with a goal of reaching 12.5% by mid-2010. Drax is also developing two other 300-MW biomass projects in the UK that, together with Drax, will produce 15% of the renewable energy in the UK.

Although wood historically has been the most common cofiring fuel, any number of other biomass fuels can be used, with the options typically driven by proximity to local supplies. Thus, even though regions such as the Northeast, Southeast, and Midwest might have the largest potential native wood stocks, other regions have their own potential fuel stocks. Also, the type of available biomass fuels will help define the best of the cofiring technology options for a particular plant (see "Three Cofiring Options," next page).

The main reason to use cofiring, of course, is environmental: Sustainably grown biomass is widely recognized as a greenhouse gas – neutral fuel (Figure 2). Although other renewable options, such as wind and solar energy, are "cleaner," in that they do not require burning any fossil fuels, cofiring directly reduces the levels of sulfur oxide, nitrogen oxide, and carbon dioxide from emissions-heavy coal-fired facilities. Accordingly, cofiring should be an increasingly attractive option in today’s regulatory environment. 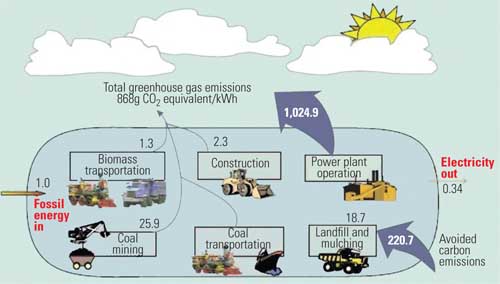 2.    Carbon neutral or better. The carbon lifecycle and energy balance when cofiring 15% biomass with coal. In this example, carbon emissions are reduced by 18%. Source: National Renewable Energy Laboratory

Why So Little Cofiring?

Although cofiring is a step in the right direction, thus far it has made little headway in the U.S., as the nation’s imagination remains focused largely on wind and solar energy. Domestic cofiring is currently limited to just a few dozen plants, many of which use waste biomass from industrial and agricultural production facilities to generate power for production at those same facilities, rather than for other customers.

The reason for this lack of development usually is quite simple: cost. For the most part, the financial commitments and other costs of developing cofiring — including the real and perceived "cost" of regulatory uncertainty and the potential exposure to unknown future costs — have outweighed its benefits. But that calculus may be about to change.

Obviously, the political landscape for renewable mandates and carbon regulation has improved significantly in recent years. There are now concrete initiatives in place — and more likely to come — that should make investors, developers, and plant operators alike investigate cofiring as a profitable and pragmatic renewable resource alternative.

Currently, 28 states and the District of Columbia have mandatory renewable portfolio standard (RPS) regimes that require end-use electricity providers to procure a portion of their electricity supply from qualifying renewable resources. Whether cofiring qualifies under these programs varies. A number of states have explicitly defined cofiring as a qualifying resource, while others have excluded it outright, likely because of its dependency on coal facilities. Other programs are silent and, arguably, the governing state commission would have to determine whether cofiring constitutes a renewable resource on a case-by-case basis. What is clear, though, is that, although RPS rules might be specific to each state, these standards typically attach real financial value to electricity produced from renewable resources.

In addition to the existing state RPS programs, the president and the Democratically controlled Congress have indicated that both a federal RPS and a national carbon regulation regime are top priorities for this session. If adopted, a federal RPS would impose a significant renewable obligation upon electricity providers across the country, filling in the existing gaps among the states and requiring electricity providers to procure renewable resources that will satisfy their obligations.

The leading Senate RPS proposal is by Senator Jeff Bingaman (D-N.M.) and includes biomass as a qualifying resource, but cofiring is not explicitly addressed. Bingaman’s draft is still under review in the Senate Energy and Natural Resource Committee but is expected to move to the Senate floor in late summer.

Representative Henry Waxman’s RPS proposal, now H.R. 2454, the American Clean Energy and Security Act of 2009, is expected to be on the full House floor in early summer. H.R. 2454 explicitly includes cofiring as a renewable resource, providing that the proportion of electricity attributable to the biomass qualifies for renewable energy credits (RECs).

Legislators also continue to debate the definition of biomass and are focusing especially on the easing of restrictions on renewable feedstocks to allow for procurement of biomass from federal lands.

Both a national RPS and carbon regulation should fundamentally alter the incentives underlying the current resistance — or, at least, indifference — to cofiring by encouraging the swift deployment of renewable resources at the lowest possible cost, particularly in those regions of the country where wind and solar production would be relatively limited. Cofiring, by taking advantage of existing infrastructure, certainly fits this bill and could serve as a key component in any RPS and carbon regulation regime.

Indeed, the UK’s experience with similar reform bears this out. Most of the UK’s coal-fired plants, which collectively generate a sizable portion of that nation’s electricity, have now been modified to utilize biomass as a portion of their fuel stocks. The UK agency governing energy and the environment attributed the proliferation of cofiring to the enactment of renewable requirements and carbon regulations. As likely will be true of the final U.S. legislation, the obligations and incentives created by the rules in the UK included the attachment of a tradable value to electricity produced from renewable resources, which fundamentally changed the cost-benefit analysis for owners, developers, and, importantly, regulators of coal-fired generating facilities.

With the increased use of cofiring, costs for this technology have dropped. The expanded use of cofiring has promoted the development of an expanding biomass fuel market, driving down cost while increasing supply. Developers in the UK also have gained increased familiarity with cofiring technology as well as with the capabilities of existing coal-fired technologies to incorporate it. This has led to decreased capital costs and shorter lead times for the modification of these facilities — experience that operators in the U.S. could rely upon to ease the transition here.

The UK experience reinforces the conclusion that anticipated changes in U.S. renewable obligations and carbon regulation will considerably alter the factors that have hindered U.S. investment in cofiring. No doubt, it still will be the case that the localized nature of biomass stocks, the potential technical challenges associated with modifying existing coal-fired facilities, and a continuing degree of regulatory uncertainty — particularly any requirement to re-open air permits — will be cost-related hurdles that potentially could discourage the adoption of this technology. Yet, on the basis of lessons learned from the UK experience, each of these hurdles can be overcome with the right mix of policy and financial incentives.

Indeed, as familiarity with the technology increases and stakeholders and the public recognize the tangible benefits of cofiring, it should increasingly be accepted as one piece of the solution, and the costs of regulatory uncertainty should continue to diminish over time.

Will Biomass Cofiring Work for Me?

Cofiring should be part of any conversation about how best to meet renewable obligations. However, given the wide variety of boiler technologies, accessible fuel stocks, and state-by-state regulatory regimes, the economic viability of cofiring has to be evaluated on a plant-by-plant basis. Any generator owner or operator investigating the use of cofiring should consider a number of factors, including these:

Though these considerations demonstrate that cofiring’s cost-benefit analysis differs from similar analyses for other renewable resources, the UK’s experience demonstrates that these factors are not inherently prohibitive but, rather, entirely manageable.

Most importantly, biomass generally, and cofiring specifically, seem to be an effective solution to the lingering and significant concern that regional variation in wind and solar potential would require some regions, particularly the Southeast and Midwest, to develop alternate renewable resources or purchase RECs from regions flush with those resources. As fate would have it, most of those areas with limited wind and solar energy have the necessary components for cofiring: a plethora of coal plants and significant biomass fuel potential. Thus, cofiring is an ideal solution to the regional hurdles confronting a federal RPS.

Recently in Kansas, state officials approved Sunflower Electric Corp.’s construction of a controversial coal plant in exchange for, among other things, the owner’s commitment to cofire a specified percentage of the coal plant’s heat input with biomass.

In short, cofiring is an underutilized opportunity for domestic renewable generation. If past experience is any indication, the coming changes to the industry should fundamentally alter the incentives for cofiring, rendering it a low-cost, reliable source of renewable energy. Plant owners and operators, as well as politicians and regulators, should seize this opportunity to investigate it for themselves.