Performing regular oil changes on remote generators is far from simple or cost-effective. Here’s how one firm harnessed technology to extend oil change intervals from one week to two months.

For most people, an oil change means dropping into the local Jiffy Lube or repair shop and driving away 15 minutes later. For Dennis Fleming, manager of the Valleyview branch of Tarpon Energy Services Ltd. of Calgary, Alberta, that isn’t an option. Tarpon provides diesel generator sets, primarily to companies working in the Canadian oil patch, and maintains units up to 700 kilometers away from his headquarters.

"It is not uncommon to drive for hours to do a 20-minute oil change, then hop in the truck and drive back," said Fleming. "There is no way of getting around that when dealing with these remote locations."

To make matters worse, some locations can’t even be reached by truck. "We have even had a couple jobs in northern Alberta where we were helicoptered in and out for one whole summer just to change the oil in the unit," he continued. "Our guys were pretty excited about the helicopter rides."

Tarpon leases more than 200 Cummins diesel generator sets in sizes ranging from 20 kW up to 1 MW. The units are mostly used by oil companies to get a well site up and running until line power is brought out to the site, though some locations are too remote to ever connect to the grid. Fleming says that most well sites use the 100-kW generators to power the surface pumps or the down-hole submersible electric pumps. The smaller units might run lights, heaters, and electronics at a site, while the megawatt-scale generators would be used at new batteries facilities where the liquids obtained from one or more wells are stored for initial processing before being sent to the refinery.

The oil producers rely on the generators to always be available. Even a momentary power glitch will cause the electronic systems running the down-hole pumps to shut down, requiring a manual restart. If that happens during dinner or overnight, the wells can fill with sand. "At that point, they will have to bring a service rig in and pull the pump, clean out the well, put the pump back down, and hope it works," said Fleming. "It is quite a costly venture for them."

For most applications the staff works on improving the reliability of the diesel engines. Many locations have a backup generator, in case one goes down, which also makes it easier to schedule maintenance. They have also doubled up on fuel filters and installed more inline fuel filters. Designing buildings with better airflow is another option, so that bugs, dirt, dust, and pollen don’t clog the radiators.

The biggest area for improvement, though, is with engine oil. As built, the generators required a weekly oil change. Adding additional oil filtration equipment extended the oil life to 350 hours, about two weeks. This was better, but still not good enough or cost-effective for those servicing the engines. It was also difficult to schedule changes that frequently. Tarpon would have to coordinate with the technicians and the oil company representatives at the locations, and due to schedule conflicts, the oil changes would usually end up going over that 350-hour margin.

"It is simply too often to be shutting down their system, especially if they have trouble starting them up again," said Fleming. "So I asked the people in my division to start looking for a way to manage the short time frame maintenance issue."

The answer Fleming found was the OilMate product from Engineered Machined Products Inc. (EMP) of Escanaba, Mich. OilMate has an interesting development history. A large yacht owner had white carpeting in his yacht, and whenever the engine oil was changed, some would wind up on the carpet, which upset the owner’s wife. The owner asked for a system that would never need another oil change. The engine’s original equipment manufacturer (OEM) approached EMP, which designed the OilMate to address this specific problem (Figure 3). 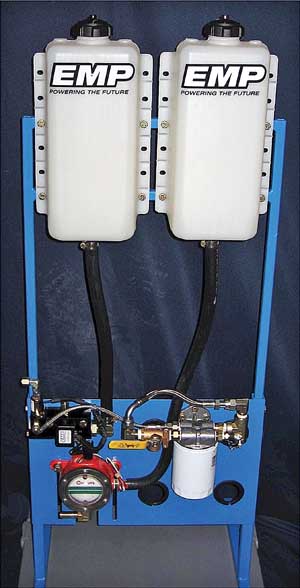 3.    Reduce the oil change interval. Biweekly oil changes are neither practical nor efficient for remote gen-sets. That frequency changed about a year ago, when Tarpon Energy Services Ltd. of Calgary, Alberta, a diesel engine rental company, started using OilMate from Engineered Machined Products Inc. Oil changes are now done once every 2,000 hours (12 weeks) rather than every two weeks. Courtesy: Engineered Machined Products Inc.

The OilMate concept is elegant in its simplicity. With the OilMate, a small portion of the used engine oil is continually removed from the engine and burned in the fuel as productive energy. The OilMate then adds a little bit of fresh oil back into the sump to replace what was burned.

"That way the engine is continually running on fresh oil, the additives package is continually refreshed, and you never have to remove and dispose of the old oil," explained Bob Vardigan, EMP’s director of sales. "A traditional oil bypass filtration unit does extend the oil’s life, though not as much as the OilMate, and when it reaches the end of life, the oil is old and dirty, the additive package has been depleted, and you still have to get rid of the oil."

The OilMate initially was utilized for marine diesels and then began being used as an OEM and aftermarket product for over-the-road trucks, especially in North America and Australia. From there the product expanded to off-road vehicles, including the U.S. Army’s eight-wheel-drive Stryker armored combat vehicles. Finally, it started being deployed for remote generator sets. With all markets combined, there are now about 40,000 OilMates in use worldwide (Figure 4). 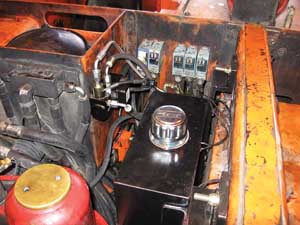 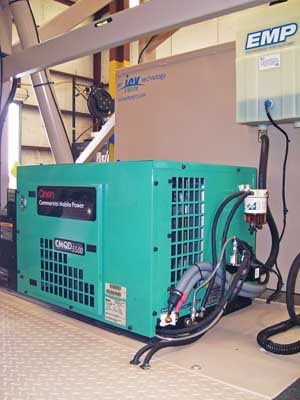 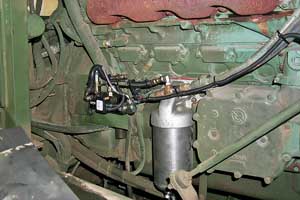 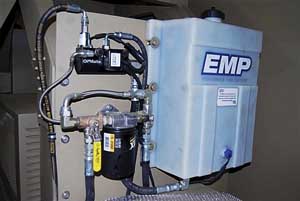 Because OilMate had already been tested by Cummins on the engines run by Tarpon, Fleming decided to try it out. "The system is capable of going 2,000 hours without any filter changes whatsoever, and if you change the filters at that time, the oil in the reservoirs can last 4,000 hours," he says. "It also extends the service life of the equipment, so we got a nice bonus."

— Contributed by Drew Robb, a Los Angeles – based writer specializing in engineering and technology issues.