In 2006 and 2007, POWER ran a three-part series on the formation of SO3, O&M issues caused by SO3, and sorbent injection control for SO3 control. Three years later, many plants still struggle with their SO3 mitigation systems or remain undecided on which mitigation path to follow. This article explores the advantages of dry sorbent injection technology.

The formation mechanisms and high costs of controlling SO3 emissions have been thoroughly discussed in a series of three POWER articles on "SO3 ’s impacts on Plant O&M" (Part I in October 2006, Part II in February 2007, and Part III in April 2007). In that series, the impact of SO3, in sufficient concentrations, was shown to penalize plant heat rate, increase plant operation and maintenance (O&M) costs for back-end equipment through the formation of weak acids that are very corrosive, and increase fouling of air heaters and selective catalytic reduction (SCR) catalysts due to the reaction of SO3 with ammonia. In the three years since those articles were published we still find many utilities struggling to implement SO3 mitigation measures.

One of the key conclusions presented in the final article in the series was that injection of a carefully selected finely atomized sorbent, such as trona, is very effective in mitigating the formation of SO3. Dry sorbent injection (DSI) technology for SO3 control is gaining popularity in the utility industry due to its low capital cost, small installation footprint, ease of operation, and flexibility to adapt to fuel changes.

Trona is a naturally occurring mineral that is produced in Green River, Wyoming (Figure 1). Interestingly, milling of trona is not necessary, as it is already produced as a fine powder. Although milling trona can increase its SO3 removal efficiency, the cost to do so must be balanced against the added cost of equipment and maintenance. 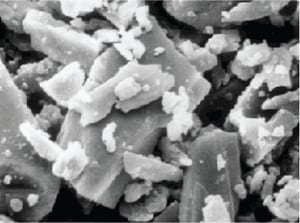 In a DSI system, a fine sorbent powder, such as trona (Na2CO3 • NaHCO3 • 2H2O) or hydrated lime (Ca(OH)2), is injected into the flue gas duct to remove SO3. Trona is calcined in the hot flue gas (>275F) to form porous sodium carbonate (Na2CO3), as shown in the following equation:

The release of water vapor and CO2 in the calcination process creates numerous micropores inside the sorbent, a phenomenon called the "popcorn" effect, that produces a surface area five to 20 times the original surface area. The specific surface area of calcined trona is approximately 10 m2/g. This relatively high surface area has one significant advantage: It enables fast reactions between sodium carbonate and SO3 (Figure 2). 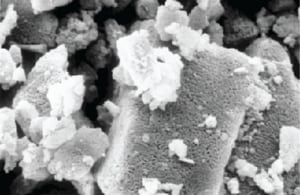 2.    Calcined trona. Note the micropores formed in the trona after heating it to temperatures above 275F. Courtesy: Solvay Chemicals Inc.

Trona can be injected at almost any location in the gas stream as long as the flue gas temperature is above 275F (Figure 3). It is our experience that natural mechanically refined fine trona reactivity to sulfur oxides is improved as the injection temperature is raised, unlike chemically refined milled sodium bicarbonate, which has a practical upper operating limit of about 800F. The typical reference location options are shown in Figure 3. Nevertheless, each location has its own advantages and disadvantages, as explained below. 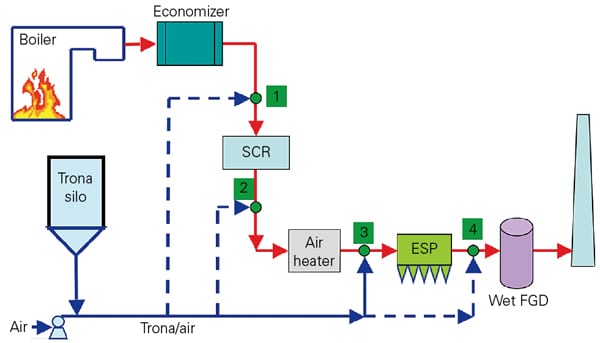 3.    Many injection options. There are many options for injecting trona into the hot gas stream. Each has advantages and disadvantages. The specific equipment at your plant will determine the best option. Source: Solvay Chemicals Inc.

Upstream of the SCR (Location 1)

Between the SCR and Air Heater (Location 2)

Between the Air Heater and ESP (Location 3)

Between the ESP and Wet Flue Gas Desulfurization (Location 4)

It’s critical to have a good trona injection system and complete a flow modeling study to ensure that trona and SO3 are well mixed. The red area in Figure 4 represents the conditions where the formation of sodium bisulfite (NaHSO4) could occur. NaHSO4 at temperatures >~370F is a sticky substance and can deposit on the surfaces of air heater and duct, thus causing buildup and plugging. When SO3 is unevenly distributed in the flue gas duct, more trona than stoichiometrically required must be injected to get full coverage to avoid conditions resulting in some areas where the SO3 concentration is high and NaHSO4 could be formed. Figure 4 shows the SO3 /H2SO4 and flue gas temperature conditions under which liquid NaHSO4 could form at equilibrium. The design residence time of the sorbent should be more than 1 second. 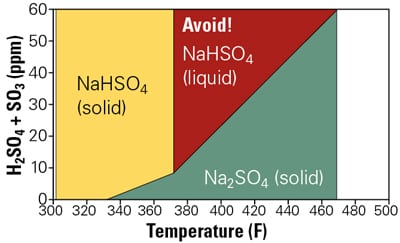 Generally, the design of a DSI delivery system is quite simple. A blower moves trona from a silo to the injection lances. In some applications, the discharge air from the blower must be chilled and dehumidified based on the ambient conditions (Figure 5). In addition, the conveying air temperature should be kept below 140F. 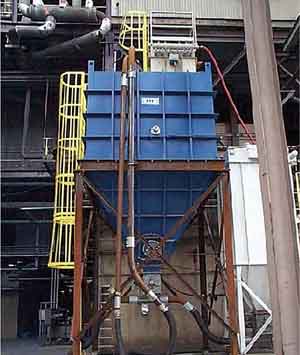 The efficiency of a DSI system depends on many factors. The key to a well-performing DSI system design is to distribute the sorbent evenly in flue gas so that the sorbent and acid gases can be well mixed. Other important criteria include these:

Trona is very reactive with SO3. At one 800-MW power plant located in the eastern U.S., trona was injected between the air preheater and cold-end ESP. The SO3 was measured upstream of the trona injection ports and downstream of the ESP. Figure 6 illustrates the SO3 removal rate versus trona normalized stoichiometric ratio (NSR) based on SO3.

Because the SO3 concentration is much lower than SO2, high removal efficiencies (>95%) require good mixing between trona and flue gas. In other words, the SO3 removal efficiency is limited by the mass transfer, not by the reactivity between SO2 and trona.

The reactions between trona and SO3 are very fast. Over 90% of SO3 removal rate has been routinely achieved with an NSR of around 1.5 when using trona. 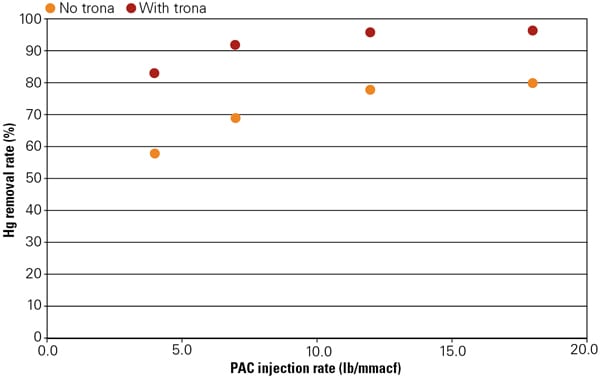 In addition to mitigating air pollutants, sodium sorbents are able to improve the performance of electrostatic precipitators, even cold-side ESP units. Some flyash has higher resistivity, which makes the capture of fine particulate material difficult with electrostatic precipitators. The injection of low-cost sodium sorbent, such as trona, is able to lower the resistivity of flyash and, consequently, improve the performance of the ESP.

Solvay was awarded a patent for the use of trona in a DSI to react with SO3 in certain cases in March of this year. However, the patent has been dropped and the technology is now available to the public. This decision was reached in cooperation with and the full support of AEP, which was one of the pioneers of using trona for SO3 mitigation. Solvay feels very strongly that there should be no encumbrances to the widespread use of this technology.