Worldwide power demand for computing could exceed the world’s energy production by 2040, according to a report from a global coalition of trade groups for microchip manufacturers.

The recently released 2015 International Technology Roadmap For Semiconductors 2.0 (ITRS), prepared by experts from the U.S., Europe, Japan, Korea, and Taiwan, provides an assessment of the near future for technological advances in semiconductor manufacturing. The ITRS is a multinational planning effort that began in the 1990s, but the 2015 roadmap is the last one it will produce.

The report covers a wide range of subjects of interest to semiconductor manufacturers and industry observers, but one observation relevant to the power sector is that energy demand from computers large and small is growing so rapidly that it could outpace the world’s ability to power them at current rates of expansion.

The problem is not simply that more computers are being used every year. The challenge is that as microprocessor chips become more powerful, they not only require more electricity to operate but also become less energy efficient.

“Greater energy efficiency is mandatory in order to fully realize future IT capabilities,” the report notes. “Without progress, power demands at the transistor, chip, and system levels will become prohibitive.”

At the chip level, the progression of Moore’s Law—an observation that the number of transistors on leading-edge microchips has doubled every two years—has led to chip models that require an astonishing level of power density. The two-dimensional arrays of transistors of years past are giving way to stacks of transistors operating in three dimensions, but this approach may be nearing a performance wall.

“Today more than half of the energy used by a processor is to move data via interconnects, e.g., between memory and logic. Conventional approaches are running into physical limits,” the report says.

This means that microprocessors are becoming more inefficient as their processing power grows. Taking what is known about microprocessor energy consumption and the number of computers that will be in operation, it is possible to estimate the amount of energy they will require in the future. Using current benchmark performance for energy efficiency, “computing will not be sustainable by 2040, when the energy required for computing will exceed the estimated world’s energy production,” the report says (Figure 1). 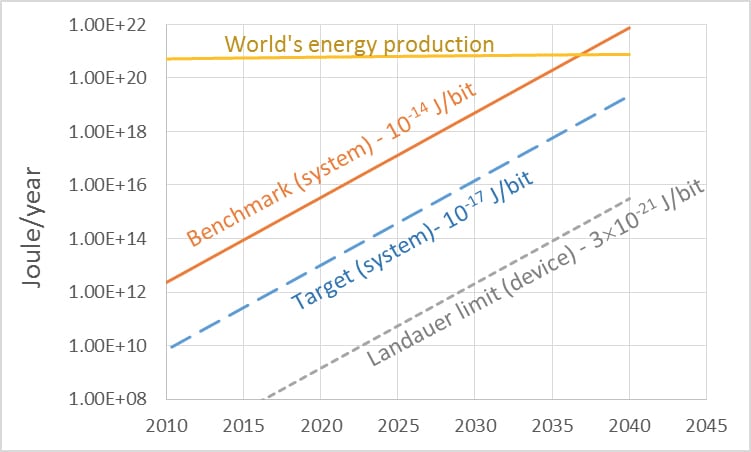 As one example, the report predicts that by 2040, the average data center will cover 2.4 million square feet and require more than 2 TWh of electricity each year—500 GWh for cooling alone.

Avoiding these problems will require “radical improvement in the energy efficiency of computing.” The report predicts that this will lead to major changes in how microchips are designed and manufactured beginning in the 2020s, when current approaches will reach their limits.