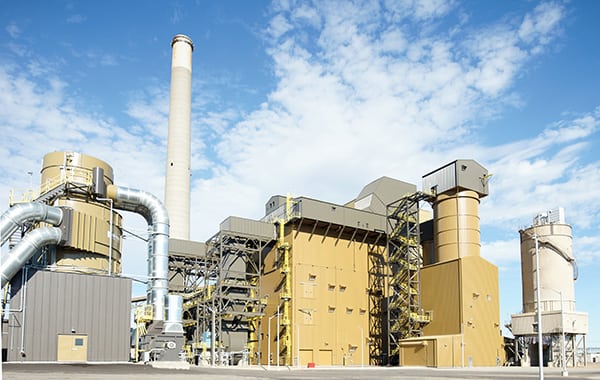 When owners of the Big Stone Plant researched air quality control system technology, they considered all available options and eventually settled on a design that was not in widespread use. Now that the three-year $384 million project is complete, they have no regrets that they chose a circulating fluidized bed dry scrubber.

Like many coal-fired power plants in the early 2010s, the Big Stone Plant in eastern South Dakota was faced with a question: What should be done at the plant in order to meet new federal and state emissions requirements? Its 40-something-year-old design would need an air quality control system (AQCS) upgrade if it intended to continue operating in the future. Choosing what technology to install was a key decision. In the end, Big Stone’s decision-makers opted for circulating dry scrubbing technology rather than selecting a wet scrubber or more “traditional” dry scrubber design.

“The comfortable thing to do would have been to choose the technology that has been around for decades,” said Kirk Phinney. “But we did our homework and concluded that a circulating dry scrubber would help us well into the future. Today, we have one of this industry’s top-performing retrofit units in terms of SO2 reduction. We know we made the right decision.”

Phinney was the commissioning manager for the Big Stone AQCS project (Figure 1). He transferred to Big Stone in the hope of being part of the undertaking—a nearly $400 million investment—and quickly became a vital member of Project Manager Mark Rolfes’ team.

The first step for Rolfes was to obtain permits and approvals from the three states that regulate the Big Stone Plant (Minnesota, North Dakota, and South Dakota). Phinney set to work during that time helping review all the specifications and layouts, gathering operating data, and meeting with technology suppliers in order to obtain accurate bids for the project. He later supported the construction phase and served as commissioning manager.

“It has been very exciting to be involved with the project all the way through,” Phinney said.

Phinney’s employer, Otter Tail Power Co., is the majority (53.9%) owner of Big Stone, with NorthWestern Energy and Montana-Dakota Utilities also holding shares. Otter Tail people staffed the project and operate the 495-MW power plant, which burns subbituminous coal and has been online since 1975.

The driving force for the project was the need for Big Stone to meet upcoming federal regulations, including new mercury standards and regional regulations to reduce haze over Minnesota’s Boundary Waters Canoe Area, a popular outdoor recreational area. The existing air pollution control system on the boiler was a baghouse—effective at removing dust and particulates, but not gaseous emissions or mercury. After doing a thorough evaluation of the best available retrofit technology, Big Stone’s management decided to pursue a dry scrubber (shown in the opening photo).

“Flue gas cleaning with a dry scrubber is today an attractive alternative to wet scrubbers, even for large coal-fired boilers,” said Paul Petty, director of Applications and Technology for ANDRITZ’s air pollution control business in North America. “It was impossible to make that statement when I started in the business. But much has changed.”

Spray dry absorber (SDA) technology had been the traditional dry scrubbing solution for power plants requiring large SO2 removal rates. The downside of SDA systems is the potential for corrosion due to the creation of lime slurries and the need to quickly dry the slurry droplets in the scrubber vessel. Another drawback is that SDA systems are able to remove only about 85% to 95% of the SO2.

“The most important advantage of circulating dry scrubbing is the ability to achieve this 98%+ reduction of SO2 and other acid gases,” Petty continued. “Other important benefits are a lower capital cost, simpler design, lower water use, no wastewater discharge, and the ability to remove all pollutants, except carbon monoxide and nitrous oxides, in one step.”

“We went through a very rigorous process to evaluate the technical offerings,” Phinney said. “Our evaluation concluded that the circulating dry scrubber had further room to perform than the SDA and would not put us at the limits of the technology.”

In evaluating suppliers, it came down to experience. “ANDRITZ had six installations at that time—not a huge number, but enough for us to feel confident,” Phinney said. “The other supplier had one.”

The way the system works is by directing flue gas into the bottom of a circulating fluidized bed (CFB) vessel, where it is turned upwards and passes through a grid of venturis. Hydrated lime and recirculated byproduct is introduced below the venturis and gets evenly mixed and dispersed into the flue gas.

Cooling water spray (which can be wastewater from boiler blowdown) is added above the venturi section, independent from the reagent feed. The byproduct is collected downstream in a pulse jet fabric filter (Figure 2) and then metered to recirculate some back into the scrubber vessel (Figure 3). The remainder is diverted into the ash-handling system for disposal.

“In simple terms, the contract we had with Big Stone was for everything above the foundations for the scrubbing and waste ash handling,” said Scot Ojard, project manager for ANDRITZ.

One twist at Big Stone was that the CFB scrubber needed to be a dual-train configuration due to its size. The practical limit for a single train is around 400 MW. This was the first dual-train installation in North America for ANDRITZ.

“There has never been a worry during this project,” said Erik Fladhammer, project engineer for Otter Tail. “It has been a very good relationship. The discussions have always been open. Scot and his team came up through the technical side. Their suggestions are practical and it is clear that these guys knew how to build and run scrubbers.”

Construction began in spring 2013. The plant was taken offline in early 2015 for a planned outage to do all the tie-ins and extensive boiler work to increase the surface area. “When we came back online, we moved along quite well,” Phinney said.

“During the commissioning process, we used our newest computational flow dynamic model studies to optimize the turning vanes at the bottom of the scrubber inlet to improve the dispersement of recirculated byproduct materials. This improves Big Stone’s ability to run efficiently at low loads,” Ojard said. “Since then, the customer has taken over operations and signed all acceptance certificates.”

“ANDRITZ gave us excellent performance guarantees for SO2 removal, availability, and lime consumption,” Phinney said. “If I had to do it all over again, I would do it the same way and with the same suppliers. The people are technically smart, practical, and no-nonsense. They fit the company personality at Otter Tail very well, and we did good work together.”

Although Otter Tail wasn’t willing to release actual scrubber performance data, the company did acknowledge that Big Stone’s uncontrolled monthly average SO2 emission rate in 2014 was 0.910 lb/MMBtu. It said the ANDRITZ-supplied equipment has had no problems meeting the plant’s current permit limit of 0.09 lb/MMBtu. Otter Tail also reported that the equipment met all performance requirements during its recently completed 120-day guarantee run, and that the plant has met all NOx and mercury emissions requirements.

“The original budget was over $400 million for the project,” said Rolfes. “The upgrade is now expected to close out 21% below the budget due to our procurements and engineering work coming in below anticipated cost. Plus, we have been able to reduce the contingency reserves. That is good news for our customers, owners, and shareholders.”

Opting for circulating dry scrubbing technology turned out to be the right choice at the right time. With its new AQCS, the Big Stone power plant has reduced emissions of NOx and SO2 by about 90% and mercury by about 80%. The project allows the plant to be a viable power resource well into the future. ■