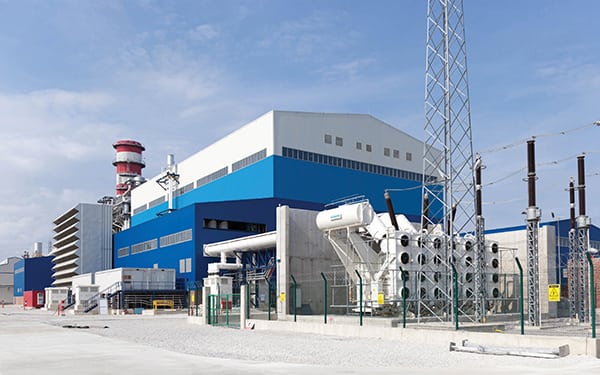 The 600-MW Cengiz Enerji Samsun Combined Cycle Plant was constructed in only 23 months and produces electricity at a thermal efficiency of approximately 61%, making it one of the most efficient power plants in the world.

The Turkish electricity market was opened to competition in 2001 when the Turkish Grand National Assembly passed the Electricity Market Law, which unbundled its generation, transmission, and wholesale power sales activities. One of the goals of the law was to make Turkey’s power market compatible with those of the European Union (EU), although EU membership negotiations continue to move slowly. The state-owned generation and transmission company was split into three separate companies: generation, transmission, and wholesale power sales. The state-owned distribution company was also divided into 21 regional companies that were subsequently privatized. The private sector owned about 65% of the installed power generation capacity by the end of 2014.

The Electricity Market Law laid a solid foundation for a competitive power market, and independent power producers (IPPs) have found a receptive climate. The market seems to be functioning well, as electricity prices for midsize industrials, for example, were ~€0.02/kWh less than the average rate found in the EU (28) in 2014. Cogeneration capacity in Turkey has also soared since 2001, rising from 3,200 MW to 8,300 MW in 2013, the last year for which data are available.

According to Turkey’s Ministry of Foreign Affairs, Turkey “has become one of the fastest growing energy markets in the world.” Electricity demand rose by an average 5.7% per year between 2000 and 2011 and approximately 8.8% per year during the period 2010 to 2014 alone. At the end of 2014, the country’s total installed generating capacity was 68 GW, up over 70% from a decade before.

The Turkish government has set an ambitious goal of reaching 110 GW of installed capacity and production of 440 TWh (more than twice current production) to meet anticipated power demand by 2023, which happens to correspond to the 100th anniversary of the founding of the Turkish Republic. The International Energy Agency agrees with this assessment, predicting that electricity consumption will double by 2020.

Turkey’s power mix is balanced between hydro (~34.7%) and natural gas (~33.5%, mostly imported from Russia), with about 500 MW of new wind generation added each year. Rounding out the country’s generation portfolio are a number of coal-fired power plants. Turkey has ambitious construction goals to meet its future power needs. By 2023, the country will commission 10 GW of nuclear power (now under construction), increase wind capacity to 20 GW, and install 600 MW of geothermal and 3 GW of solar. The plan also includes building 18.5 GW of new coal-fired capacity, burning domestic and imported coal.

The key challenges for Turkey in building this new fleet of plants is fueling and paying for the plants. Only 26% of generation today is fueled by domestic energy sources, although the stated goal is to reduce the country’s dependency on foreign fuel supplies; hence, the country’s strong emphasis on building high-efficiency power plants and using domestic energy sources.

The Ministry of Foreign Affairs also notes that, “in order to meet such an immense growth in energy demand, huge levels of investment is required.” The rapid growth in power demand and privatized energy markets has made the Turkish power market a more attractive investment than the stagnant European power markets. For example, Turkey has over 5 GW of new natural gas–fired power generation capacity now under construction or entering commercial service.

Cengiz Enerji Sanayi Ve Ticaret A.S., one of the 35 companies under Cengiz Holding, was established in 2000 with the goal of entering the new wholesale power market as an IPP. Cengiz Enerji currently owns and operates ~1,000 MW of natural gas–fired plants that produce power for the wholesale energy market. The company’s most recently completed natural gas–fired project is the 600-MW Cengiz Enerji Samsun Combined Cycle Plant (CES), which reached construction completion in March 2015. CES is located east of Samsun, the largest city in the Black Sea region of Turkey. Samsun Natural Gas Distribution, also a Cengiz Holding company, supplies fuel for CES.

Cengiz Enerji awarded Siemens the power island portion of the project in February 2013; Cengiz Enerji in-house staff were responsible for construction and installation work at the plant. The core of the plant is the Siemens SGT5-8000H combustion turbine, an SST5-5000 steam turbine, and a single SGen5-3000W generator, arranged on a common driveline (Figure 1). The SGT5-8000H, at 400 MW, is the world’s most powerful combustion turbine in commercial operation (the SGT6-8000H 60 Hz version is rated at 296 MW), according to Siemens, with improved turndown capability for high efficiency and lower emissions during part-load operation. Siemens also supplied a Benson (once-through) heat recovery steam generator manufactured by Doosan, its SPPA-T3000 control system, and other auxiliary and ancillary systems. Condenser cooling is provided by a once-through seawater system.

The Turkish power markets are dynamic, and entrants face stiff competition. New plants must not only be environmentally benign but must also feature very flexible operations and high efficiency in order to rank high in the dispatch order. “Our new plant in Samsun will meet Cengiz Enerji’s requirements for a flexible power plant with short startup times and fast load capability and will be the perfect complement to our power plant fleet,” said Omer Mafa, CEO of Cengiz Enerji.

There are efficiency and operational advantages for the single-shaft combined cycle design selected for CES. For example, a single large generator instead of two typically used in a 1 x 1 combined cycle plant reduces capital cost and is also more efficient than using two smaller generators. The operation of the plant is also simplified, particularly because the steam turbine can be disconnected from the driveline during startup and shutdown.

Single-shaft plants also are capable of faster startups and are much more responsive to load swings. CES is designed for 250 starts per year and is capable of producing full load in as little as 30 minutes after a 6-hour shutdown. This capability was demonstrated at E.ON’s Irsching 4 Power Plant during 2008–2009 (renamed Kraftwerk Ulrich Hartmann) in Bavaria, Germany, which was a POWER 2011 Top Plant.

Furthermore, CES reacts very quickly to grid fluctuations and can ramp its output by more than 35 MW per minute to meet the rapidly fluctuating power demand. This capability is extremely important in Turkey, with its volatile energy prices and because the country is integrating about 500 MW of wind energy each year onto its grid.

Siemens, together with its partner and customer Cengiz Enerji Sanayi Ve Ticaret A.S., completed CES in a record construction time of only 23 months, two months ahead of the contract deadline. Siemens also supplied a 16-year service agreement for its equipment covering scheduled maintenance, spare parts, and part renewals during the warranty and post-warranty period. A time-compressed video shows the construction of the plant in 90 seconds (www.youtube.com/watch?v=3K8CgCJKD3M).

The fleet of Siemens H-class world-record gas turbines has achieved more than 180,000 cumulative equivalent operating hours with an availability of more than 97%. Siemens has now sold 72 H-class gas turbines worldwide. Sixteen of these machines are currently in successful commercial operation. CES is the first SGT5-8000H combustion turbine installed in Turkey and follows installation of several 60 Hz versions in the U.S. at Florida Power & Light’s Cape Canaveral (a POWER 2013 Top Plant) and Riviera Beach sites.

Cengiz Enerji CEO Mafa said the project team worked extremely well together, which was instrumental in achieving the rapid construction and operation of the plant. “This new plant is the perfect complement to our power plant fleet,” he said.

Another similar project is in the pipeline: Bandirma II, located on the southern coast of the Sea of Marmara, near the city of Bandirma in the Balikesir province. Enerjisa, a joint venture of Sabanci Holding and E.ON has awarded Siemens a turnkey contract for a 600-MW combined cycle plant also powered by an SGT5-8000H combustion turbine, with a design much like the CES plant. The plant is expected to be completed in the spring of 2016.