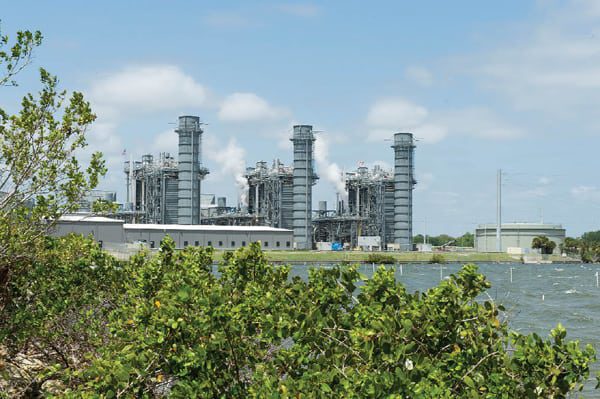 Continuing a drive to build one of the cleanest, most efficient fleets in the country, Florida Power & Light just flipped the switch on its state-of-the-art Cape Canaveral Next Generation Energy Center, a three-unit, 1,200-MW facility that will help meet the needs of a power-hungry state—in addition to keeping some manatees warm.

No one can accuse Florida Power & Light (FPL) of having anything against natural gas.

The biggest consumer of gas in a state with the second-biggest appetite for the fuel, and by far the state’s largest utility, NextEra Energy subsidiary FPL is in the midst of a major drive to modernize and upgrade its fleet, with six new combined cycle plants either just commissioned, under construction, or in the planning stages. The newest plant to come online is the three-unit, 1,200-MW Cape Canaveral Next Generation Clean Energy Center in Brevard County, just across the Intracoastal Waterway from the Kennedy Space Center.

The plant employs Siemens’ flagship SGT6-8000H turbines, the 60-hertz version of the sets used in the Irsching 4 Power Station in Germany (a 2011 POWER Top Plant), which set a world record for combined cycle efficiency at 60.75%. The SGT6-8000H can go from standby to start in just 5 minutes, and to full power in just 15 minutes. The Siemens turbines help make the new plant at least 33% more efficient than the 1960s-era thermal plant it replaced. The new plant also generates only half the carbon dioxide emissions and 90% less pollutants than the old plant, despite having 50% greater capacity.

Bumps in the Road

Getting here, however, wasn’t entirely straightforward.

FPL first proposed replacing the old Cape Canaveral plant in 2008. The two-unit, 800-MW dual-fuel facility, which was built in part to supply power for the new Kennedy Space Center, first came online in 1965 but had outlived its usefulness as oil and gas prices climbed in the 2000s. In order to maintain reserve margins when it took the old plant offline, however, FPL first had to add a third unit to its West County plant in Palm Beach.

The Florida Public Service Commission (PSC) approved the proposal in September 2008. Final approval to proceed with construction was received in October 2009—just as the bottom fell out of the global financial markets and the PSC denied a rate increase to pay for a new natural gas pipeline into the state. In January 2010, citing that decision and the deteriorating economy, FPL suspended the plans for Cape Canaveral for several months. In April, it decided to move ahead again while at the same time laying off about 300 of its staff. Despite the rate decision, FPL decided that the need for the new plant was too great to put off construction any longer.

But there was another, entirely different wrinkle to deal with first. The project had added environmental sensitivity because of the manatees in the Indian River Lagoon, from which the old plant drew, and to which it discharged, its cooling water. Ironically, far from being a threat to the manatees, the plant’s presence attracted more and more of the endangered animals to the lagoon because of how its effluent raised water temperatures, especially during the winter. But with the old plant being shut down after 50 years, that source of warmth was going away. And without some replacement, the manatees would lose a critical winter refuge, and many of them would likely die.

So in the fall of 2010, after the old plant was torn down, FPL spent nearly $5 million installing a system of pumps and heaters in the lagoon to replace the lost effluent. FPL worked with state and federal officials to ensure the manatees would survive the three-year hiatus before the new plant came online. The system worked as planned, with hundreds of manatees clustering around the heaters as they once did around the old plant’s outlet. The system surely averted a catastrophe for the animals as temperatures plunged to record lows that winter.

Zachry was chosen to deliver engineering, procurement, and construction for the turnkey facility, and construction began the following April (Figure 1). At its peak, more than 650 jobs were created, approximately three-quarters of which were filled by local workers.

Major equipment was in place in February 2012, and testing began in November. Commercial operations began on April 24, 2013. The project was completed for approximately $900 million, about $140 million under budget and more than a month ahead of schedule. Key milestones are shown in Table 1.

FPL’s drive to modernize its fleet isn’t just for show. Its investments in new combined cycle gas plants since 2001 have cut its fuel costs by more than $6 billion through 2012, and all of those savings have been passed on to its customers. The shift to natural gas has also cut its oil use by 98%, to under 1 million barrels annually.

In addition to significant fuel cost savings, the upgrades have further improved FPL’s emissions profile, already among the cleanest in the country. Other environmental enhancements were also worked into the project. The plant’s administration building employs rooftop solar panels and is LEED certified. And like the old plant, it will warm the lagoon with its cooling water effluent, helping maintain the manatees’ winter sanctuary.

“It’s fitting that this historic Cape Canaveral site, which emerged to power American innovation and leadership in the space race more than half a century ago, will now be using some of the most advanced generation technology available,” FPL President Eric Silagy said. “This plant uses 33% less fuel to generate electricity, which will help us keep our typical residential customer bills the lowest in Florida and significantly lower than the national average. It’s an important achievement for our company and our state.”

The new plant is expected to deliver $15 million in tax revenue for local governments and school districts. As part of a rate agreement approved by the PSC in 2012, the average net increase for FPL’s customers to pay for the plant will be about 16 cents a month, as the cost of construction was largely offset by significant fuel savings.

“We are excited to be a part of such a significant program—especially with one of our longest standing customers,” Zachry Executive Vice President Keith Manning said. “Our current project success with FPL has given us a great understanding of the quality and detail that they expect and we look forward to a strong, continued partnership with FPL and the communities they serve.”

Though the plant is now up and running, FPL is not slowing down. A sister facility, which Zachry is also building, is currently going up in Riviera Beach and is slated for operation late next year. In July, FPL demolished another old plant north of Miami, Port Everglades, to make way for another new combined cycle facility planned to begin construction in 2014 and operations in 2016.

FPL also hasn’t given up on getting a new gas pipeline built into Florida. On July 26, it announced a two-phase project that will bring gas from Alabama to a new hub in Orlando starting in 2016. The 465-mile Sabal Trail project will be able to move more than 1 Bcf/d of natural gas to customers in Georgia and Florida. The Central Florida Hub project will connect to another new pipeline that will supply up to 400 Mcf/d to FPL’s Martin hybrid combined cycle–concentrating solar plant near Indiantown (another 2011 POWER Top Plant).

The two projects should ease congestion on gas imports into Florida. With only two interstate pipelines supplying its gas, the state—and FPL—are at risk of serious problems should flow on one of them be interrupted. That’s a risk FPL wants to avoid with so much of its fleet dependent on gas.

Certainly, the manatees would agree. ■