Hurricane Florence floodwaters have breached a cooling lake dam at Duke Energy’s Sutton Plant in Wilmington, North Carolina, releasing water into the Cape Fear River and flooding the footprint of the gas plant at the site, which has been shut down.

The company’s latest update signals mounting troubles at the site, where Duke Energy shuttered the three-unit, 575-MW coal-fired Sutton Plant in 2013 and demolished it in 2017. A 625-MW natural gas combined-cycle plant was opened at the site in 2013.

The facility also houses two coal ash basins—one with a 50-acre pond, built in 1971, and the other with an 82-acre pond, built in 1984—and a lined landfill that is under construction. Results of an annual inspection conducted by Amec Foster Wheeler this June showed the coal ash dam structures comply with regulatory standards.

Before Hurricane Florence dumped more than 30 inches of rainfall at the plant this week—which Duke Energy noted was a “historic” number—the company was working to excavate ash from the Sutton basins to fully lined facilities offsite and onsite. On Friday, the Cape Fear River was still rising and expected to crest on Sunday. 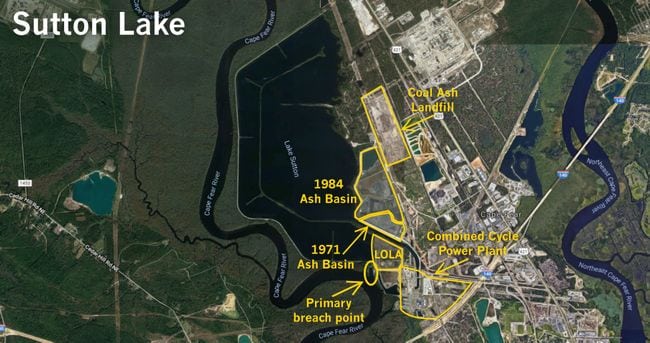 September 15: A Slope Failure at a Coal Ash Landfill

The company’s concerns about the storm’s flooding impact on the Sutton plant have ramped up since Saturday, September 15, when it first identified a slope failure and erosion at one section of the landfill. That failure displaced about 2,000 cubic yards of soil and coal ash, the “majority” of which was collected in a perimeter ditch and haul roads that surrounds the landfill.

As an assurance widely scoffed at by environmental groups, the utility in a statement on Saturday also said: “Coal ash is non-hazardous, and the company does not believe this incident poses a risk to public health or the environment. The company is conducting environmental sampling as well.” It added that site personnel are managing the situation and will proceed with a full repair as weather conditions improve.

September 19: No Impact Yet on Lake or River

On September 19, the company issued another statement saying that water samples collected from various locations demonstrated that coal ash released from the landfill had not impacted water quality at Sutton Lake, the 1,100-acre manmade reservoir  that was built in 1972 to supply cooling water to Sutton Plant. It noted, however, that site inspections had found cenospheres—hollow beads comprised of alumina and silica that are a byproduct of coal combustion—in Sutton Lake.

The company said that it had managed water levels inside the cooling lake before, during, and after the storm. At the same time, it said it continued to monitor water levels from the Cape Fear River, which flows near Sutton Lake.

On that day the company also said that it was working to cleanup the materials released in the aftermath of the slope failure identified on September 15. “As the company has previously reported, a very small amount of ash made its way off plant property to an adjacent industrial site, which is being cleaned up,” it said.

On September 20 the company reported, citing aerial photographs, that the rising Cape Fear River was overtopping the cooling lake. It also said erosion was apparent on the interior slope of the berm, which is protected by a layer of compacted soil and cement. The company also opened two large 24-inch valves to release water from the lake. The Sutton ash basins were not affected, and the gas plant was still operating.

Duke Energy warned that the situation was dire. “The rising river continues to overtop the north end of the cooling lake dam, a surface that is protected by a layer of compacted soil and cement,” the company said. “Water is now exiting the cooling lake through breaches—one large and several smaller—on the southern end of the impoundment.” The cooling lake water also “flowed into the natural gas plant footprint,” prompting the company to close it.

It added, however: “Given the historic level of flooding on the river, there is little to no chance that cooling lake water will contribute to a measurable change to water levels in the area.”

Duke Energy said that it believes the coal ash in the 1971 basin “remains in place behind a steel wall separating the excavation area from the cooling lake.” But it noted the wall is submerged by floodwater. The company also appears concerned about identification of cenospheres that it determined “are moving from the 1971 ash basin to the cooling lake and into the Cape Fear River.”

The earthen portion of the basin dam is still about two feet above water “and stable,” it said. “There is no visible ash in the cooling lake, and prior to flooding the ash level was at least five feet below the top of the steel wall.”

For now, “site personnel are supplementing on-site supplies with large stone and other materials, engineering experts are moving to the site and personnel continue to develop and activate repair plans,” Duke Energy said.

September 22: Scrambling to Fix the Breach

On September 22, as the river continued to overtop the northern section of the Sutton Lake dam, Duke confirmed water was still exiting the breach on the southern end of the cooing lake impoundment. The company said it brought in additional construction materials from across the state in preparation to “repair the breach as soon as flood waters recede and it is safe to do so.”

The company added that the ash basins were stable, and that “engineers at the site are focused on a repair plan that also preserves as much water as possible in Sutton Lake to support future plant operations and recreation as it recovers from flooding.” Repairs at the lined landfill were also ongoing.

On September 20, Duke Energy said that beyond Sutton, its North Carolina coal ash basins continue to operate safely. Yet it noted that flooding had caused the river to flow across three forested, inactive ash basins at the H.F. Lee site in Goldsboro. “Visual inspections with the environmental regulator today show that some cenospheres were released during the flooding,” it said. “It also appears that only a small amount of coal ash has been displaced, similar to the impact in the wake of Hurricane Matthew. Crews will continue to monitor the situation.”

Duke said conditions at the company’s other plants appear to be improving as rivers and flooding recede.