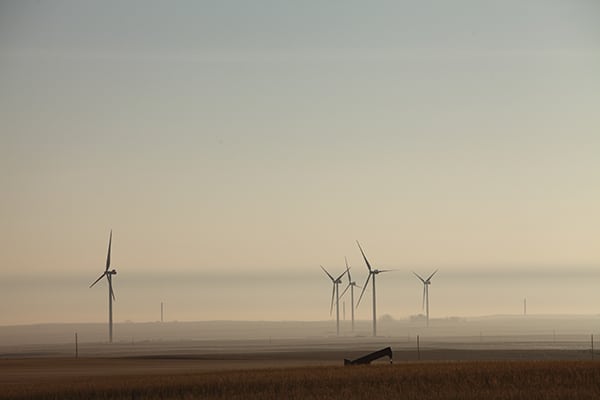 Think Alberta is all about oil and gas? While fossil fuels remain a major component of the province’s economy, wind is coming on strong as the federal and provincial governments look to reduce the area’s substantial carbon emissions. Alberta took a big step toward that goal with commissioning of the largest wind farm in Western Canada.

With its vast resources of oil, gas, coal, and tar sands—some of the largest in the world—the province of Alberta has long been known as Canada’s fuel tank. Coal- and gas-fired power has supplied the large majority of the province’s electricity needs for more than a century. (For one example, see the story on the Shepard Energy Centre, another POWER 2015 Top Plant, in the September 2015 issue.)

But times are changing, and the provincial and national governments are making a drive to support renewable generation in Alberta. Fortunately, Alberta has another substantial energy resource: wind. Not so fortunately, its deregulated electricity market makes financing projects with uncertain revenue—like wind farms—challenging.

Still, Alberta has more than 1,400 MW of operating wind capacity, comprising 37 projects and just under 1,000 total turbines as of September 2015, according to the Canadian Wind Energy Association (CanWEA). Most of these projects came online with the help of federal production incentives.

Those totals rank Alberta third in the nation for installed wind capacity, but the numbers took a big jump in May 2014 when the largest wind farm in Western Canada, and one of the largest in the country, began operations: The Blackspring Ridge Wind Project about 31 miles north of Lethbridge and 62 miles north of the U.S. border.

Development of Blackspring Ridge began in the mid-2000s under Calgary-based Greengate Power. A 100-square-mile project site was selected, and federal renewable energy credits were sold to California utility Pacific Gas & Electric under a 20-year agreement, with the electricity sold into the Alberta Power Pool under fixed contracts. The Alberta-based Climate Change and Emissions Management Corp. committed C$10 million in support of the project.

Mortenson Construction was tapped as the engineering, procurement, and construction contractor early on in the project. Mortenson’s substantial experience with wind farms—it’s built well over 100 of them—would play a key role in bringing the project to completion. 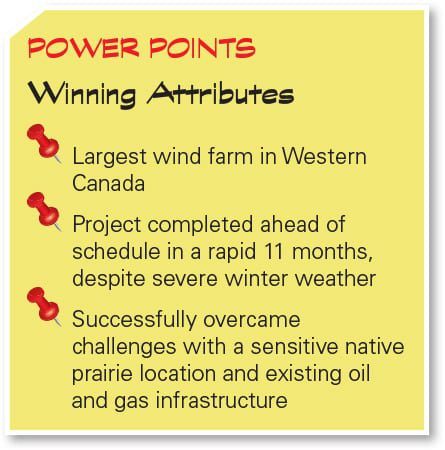 The site had some advantages, one of which was that it was largely contiguous, about 10 miles across, unlike typical wind farms that are often scattered across separate plots of land for dozens of miles. That would ease one significant element of the construction process, which was the need to move and disassemble the cranes when transiting from one turbine location to the next.

But there were also challenges. Part of the 48,000-acre site contains protected native prairie areas, and construction activities had to minimize any impact on these locations. Mortenson brought in consulting firm Stantec to perform an environmental assessment of the site and develop a resource management plan to protect the native grasslands.

Another hurdle was coexisting with the substantial oil and gas development in the area. In plotting the turbine locations, Mortenson had to navigate over, under, and around a significant number of gathering pipelines. The collector lines for the towers—nearly 100 miles worth—had to be laid across this maze of pipelines without disrupting it.

In April 2013, with construction set to begin, Greengate Power sold Blackspring Ridge to Enbridge and EDF subsidiary EDF EN Canada for C$600 million, with each company owning a 50% share. Both companies came to the project with substantial wind portfolios, and Blackspring Ridge would be their fourth jointly owned wind farm, joining the 80-MW Saint-Robert-Bellarmin, the 150-MW Massif du Sud, and the 300-MW Lac-Alfred projects, all in Quebec.

Part of the process of meeting the construction challenges was engaging the local community and building support from residents of the village of Carmangay. Among other efforts, Enbridge and EDF created the Blackspring Ridge Community Fund, which supports a variety of public and nonprofit organizations in the area.

The 300-MW project, comprising 166 Vestas V100 1.8-MW turbines, began construction in May 2013. At the time, it was the largest order Vestas had received in Canada. Altalink would supply the interconnection and HD Supply most of the electrical equipment.

Despite an aggressive schedule, construction went smoothly for most of the spring, summer, and fall. But when the Canadian winter blew in, things would change.

The winter of 2013–2014 was one of the most severe North American winters on record, with areas across central Canada and the U.S. seeing unusually cold temperatures and snowfall. Though the worst of the Polar Vortex blizzards hit further east, Alberta still took a wallop. Temperatures at the construction site dipped to –31F. Frigid weather and high winds forced construction to halt several times (Figure 1).

In spite of the weather delays, construction was completed in a brisk 11 months—several months ahead of schedule—with Enbridge and EDF EN Canada declaring the project commercially operational on May 12, 2014. Mortenson officials would credit careful preparation and planning for the successful completion despite the environmental challenges.

Benoit Rigal, vice president, engineering and construction for EDF EN Canada, said, “Bringing all 300 megawatts of the Blackspring Ridge project to completion safely and ahead of schedule is a result of outstanding efforts by Mortenson, Vestas, Altalink, and our team who worked hand in hand to overcome many challenges, including an aggressive delivery schedule. The entire team performed with professional diligence, always putting safety first while maintaining respect for the environment and our stakeholders.”

About 350 people worked on the project, and 20 permanent maintenance and operations jobs were created.

“As Enbridge’s third Alberta-based wind facility to come online, Blackspring Ridge is a welcome addition to our growing portfolio of renewable energy assets,” Enbridge’s vice president of green power and transmission, Don Thompson, said. “Completing a project of this magnitude requires a great deal of coordination and teamwork. Not only is this the largest wind farm in western Canada, it is one of the largest in Canada. Blackspring Ridge was built ahead of schedule thanks to the outstanding efforts of the entire team.”

In addition to its status as a POWER Top Plant, Blackspring Ridge has received other honors. In October 2015, it was given CanWEA’s 2015 Wind Energy Project Award, which recognizes individuals, organizations, and projects that have made significant contributions to advance the Canadian wind energy industry. As a sign of the support Enbridge and EDF EN Canada built in the area, Blackspring Ridge was nominated for the award by Kym Nichols, the mayor of Carmangay.

EDF EN Canada has more plans for the Blackspring Ridge project. It’s currently looking at developing a 60-MW solar park nearby. At up to 170,000 panels, it would—as with Blackspring Ridge—be the largest renewable energy plant of its type in Western Canada. Construction is tentatively planned for 2019. ■