Argentina has set out to complete Atucha II, a nuclear reactor it started building in 1981 and abandoned when it was 81% complete, owing to financial problems. If all goes according to plan, the country’s third reactor could go online by 2010—some 25 years behind schedule. 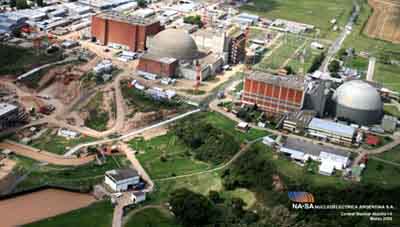 Resurrecting Atucha II. Argentina is completing a nuclear power plant it started building in 1981 to diversify its power portfolio and decrease its reliance on fossil fuels. The 632-MW Atucha II, a pressurized heavy water reactor, is being built on the right bank of the Parana River in the town of Lima, Partido de Zárate, at 115 kilometers from Buenos Aires. The project will be completed by utility Nucleoelectrica Argentina Sociedad Anonima (NASA). Courtesy: NASA

The reactor is thought to be capable of producing some 5% of the total electricity generated in Argentina. Currently, almost 9% of the country’s total power supply comes from two existing nuclear power plants, the 335-MW Atucha I and the 648-MW Emblase reactor—but this is still a minute percentage compared to Argentina’s dependence on power produced from natural gas and hydropower. In 2006, total installed capacity was 35 GW. Of this, 50% was produced from natural gas and 33% from hydropower.

The country, like neighboring Brazil and Chile, has been looking to address problems related to the cost of fossil fuels, as well as to rebalance its power portfolio. Brazil, for example, is dusting off plans to complete a postponed nuclear plant from the 1980s—the Angra III—by 2013. The drive stems from Argentina’s acute natural gas supply shortage in 2004, which was triggered by a tremendous growth in energy demand after industry recovered from the economic crisis in 2002.

Argentina had gas supply agreements with Chile, Uruguay, and Brazil, but it was forced to restrict natural gas exports to preserve the fuel for internal consumption. Even so, supplies did not meet the surge in demand, and a large number of industrial facilities and power plants in the provinces of Buenos Aires and La Pampa were forced to cut consumption.

In 2003, the US$600 million project to resurrect Atucha II was taken on by utility Nucleoelectrica Argentina Sociedad Anonima (NASA), in collaboration with the National Atomic Energy Commission and entities from Germany, Spain, and Brazil. The groups conducted a forum to collect advice and expertise relevant to the finalization of construction, preparation for commissioning, start-up, and the safe and reliable operation of Atucha II. This covered engineering, licensing, and compliance, commissioning, and evaluation of existing conditions.

The 692-MW Atucha II, a pressurized heavy water reactor, was designed by Germany’s Siemens Energy, a company that cancelled the contract to build it by mutual agreement in 1980. NASA now plans to complete the reactor itself. In July 2006, Siemens and NASA signed a new memorandum of understanding for delivery of all project documents, including basic design.

The reactor will be located on the right bank of the Parana River in the town of Lima, Partido de Zárate, 115 kilometers from Buenos Aires. It is being built next to Atucha I, with which it will share much of its infrastructure.