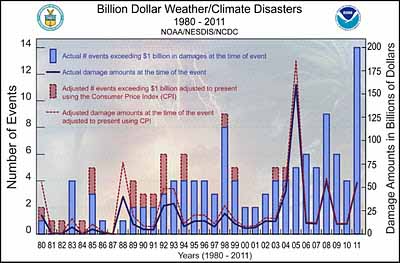 In January, the National Oceanic and Atmospheric Administration issued a press release breathlessly announcing that they (through some creative effort) were able to cobble together two additional ‘billion dollar disasters’ for 2011. If you think that identifying two additional billion-dollar weather disasters is big news worthy of a press release, then you might also conclude that locating 19 other billion-dollar disasters would be even bigger news. Well, you’d be wrong.

NOAA has quietly added 19 new disasters to their tally since 1980, apparently having discovered a quantity called inflation. The modification of their tally is (it seems) in response to a blog critique which was followed up by a Washington Post blogger. The new "billion dollar disaster" figure is at the top of this post, with the 19 new additions from NOAA in red.

NOAA has also added a new disclaimer to the webpage that hosts the list of disasters:

Caution should be used in interpreting any trends based on this graphic for a variety of reasons. For example, inflation has affected our ability to compare costs over time. The graphic now shows events that were reported to have less than a billion dollars in damage prior, but after adjusting for Consumer Price Index increases, they now exceed a billion in damages. There are nineteen new events as indicated by the shaded extensions of the bars. Continued assessment of these data are in process, as there are other factors as well that affect any rate of change interpretation. NCDC intends to include academic, federal, and private sector experts in such an assessment this year. Comparison of events for years closest to 2011 are most reliable.

An unvarnished translation would be—“This graph means virtually nothing.”

In addition to inflation, patterns of population growth, nature of economic development, accumulation of wealth all play a role in how extreme events distant in time would lead to economic impacts had they occurred with the same underlying societal conditions. (To understand why inflation is important but less so than other adjustments, compare the inflation-adjusted hurricane losses and normalized hurricane losses.) As I wrote in my initial post on this topic, for 1980 there are certainly four (and maybe five or more) other events that occurred in 1980 that would exceed a billion dollar threshold had they occurred in 2011. So by adding one event to 1980, NOAA has recognized the general problem, but has not come close to actually dealing with it.

In the end, it is nice to see NOAA acknowledge their mistaken methodology and propose an expert assessment of this topic later this year—a complete reanalysis of normalized disaster costs from 1980 to 2011 is a big job. Ultimately, the time for a federal science agency to get the science right is well before issuing breathless press releases. NOAA has dropped the ball on this one, as have virtually all of the media and bloggers who purport to care about science integrity.

Disclaimer: I am a Fellow of a NOAA cooperative institute at the University of Colorado and the Center where I work receives NOAA funding.

—Roger Pielke, Jr., is a professor of environmental studies at the Center for Science and Technology Policy Research at the University of Colorado at Boulder. This article first appeared in his blog, and is reprinted by permission.