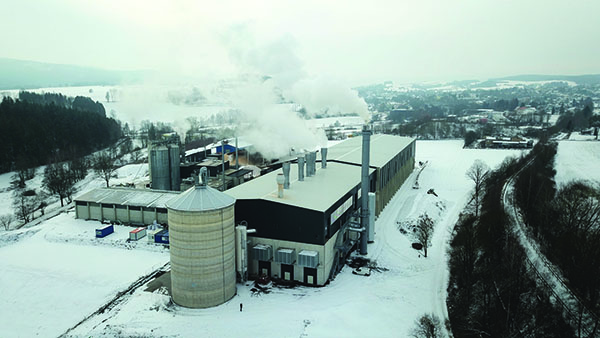 This modern Bavarian factory produces 105,000 tons of wood pellets, enough to heat tens of thousands of homes. To help manufacture them, it integrates a uniquely designed combined heat and power facility that consumes nearly all its waste heat, as well as produces enough power to meet regional demand.

Trees are prominent on the alpine hills and mountain ranges that jut and fall across the landscape in Upper Franconia, a region in the northernmost reaches of the state of Bavaria in southern Germany. The region is home to many wooded regions, including the scenic Franconian Forest, where evergreen spruce dominates, with their thin trunks rising tall over moss-covered forest floors.

The forests are sustainably managed, and several sawmills or wood processing businesses operate nearby. More than 1 million cubic meters (m3) of sawdust left behind from these operations is then shipped, dried, and pressed in pellet form at the WUN Pellets GmbH and WUN Bioenergie GmbH facilities, which sit side by side in Holenbrunn, a town in Wunsiedel district. The WUN Pellet plant alone processes 800,000 m3 of sawdust, as Sebastian Kleins, project manager at Pfaffenhofen-based energy consulting firm eta Energieberatung GmbH told POWER. “Dried and compressed, this huge pile delivers 105,000 tons of wood pellets. These in turn are used to heat approximately 30,000 detached houses,” he said.

But the operation is energy intensive. That’s one reason WUN Bioenergie, which produces about 35,000 tons of wood pellets per year, was brought online at the end of 2011 as an integrated biomass-fired organic ranking cycle (ORC) combined heat and power (CHP) plant, a project that eta Energieberatung designed. 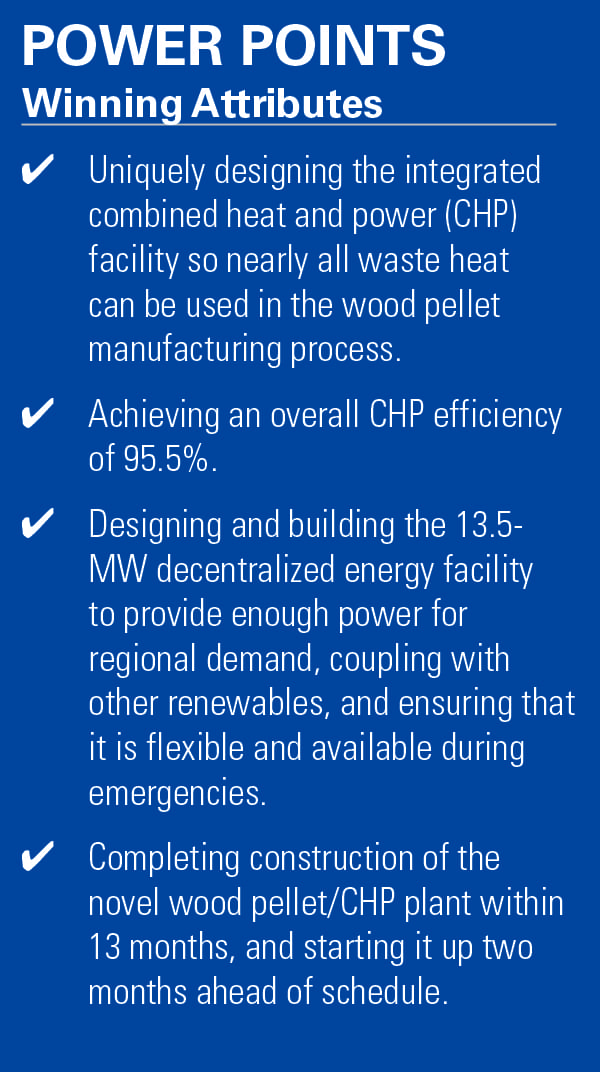 In December 2016, WUN Bioenergie’s plant manager, Thomas Koedel, approached eta Energieberatung with a proposal to design and manage WUN Pellets, which was envisioned as an integrated engine–CHP facility. As Kleins recalled, the company wanted more production capacity than WUN Bioenergie’s already highly efficient ORC-biomass project using similar equipment was providing. But it was also looking “to cover almost the whole electricity demand of the electric grid in the supply area of the SWW Wunsiedel GmbH, which is the municipal utilities company that has been a strong partner in WUN Bioenergie,” Kleins said.

When it approached eta Energieberatung, the WUN Bioenergie team had already picked key contractors, Kleins noted. Koedel and his team envisioned the new facility, WUN Pellets, as a dedicated cogeneration power plant that would be equipped with three 4.5-MW TCG 2032B V16 engines, which are highly efficient gas gensets manufactured by MWM, a German company that Caterpillar bought from British private equity firm 3i Group Plc in 2010. Developers chose the MWM gas engines because they showed “excellent efficiency and reliability observed in the first pellet plant,” which uses smaller 1.2-MW MWM gensets, said Kleins.

Today, it generates 81 GWh of electricity, about 20.5% of which is consumed for internal needs, and more than 64.4 GWh of which is fed into the public grid—the total output in local utility SWW Wunsiedel GmbH’s network area, as envisioned. As significantly, the plant is flexible, noted Kleins.

“Depending on the outside temperature, the cogeneration power plant operates as needed. In winter, all three engines run under full load during daytime. On the weekend, only one cogeneration power plant module continues to operate in order to cover the internal demand,” he said. Its flexibility is also boosted by the fast-ramp-up option offered by the MWM gas engines. Finally, it can also be coupled with the ORC-biomass cogeneration plant at the WUN Bioenergie facility next door during power emergencies or as needed, he said.

The short timeframe is noteworthy because the project is configured to reap low-temperature exhaust heat from the natural gas–fired MWM engines to enhance the sawdust drying process using a unique design (Figure 1). “The main advantage of the new plant is that it is built in one combined production and storage hall, and therefore the belt dryer—which dries the sawdust prior to the pellet mills—can use all waste heat emitted by the engine CHP,” Kleins explained. “Usually belt dyers are placed outside the production building since they need a large amount of fresh air, but Mr. Koedel decided to place the belt dryer in the second floor of the production hall,” he said.

That means all waste heat, including heat from the intercoolers and engine room ventilation, is emitted in the ambient air on the second floor. “Therefore, the belt dryer is sucking in a mixture of ambient air and waste heat air,” Kleins said. “The temperature of this mixture is about 10C higher than the ambient air temperature. This amount of energy is saved in the heating cycle of the CHP in comparison to a ‘normal’ layout. So, the new plant uses nearly all the heat produced by the CHP—both from the heating cycle and the waste heat.” However, he noted, the cogeneration plant and the drier can be operated independently from the pellet presses. A dry sawdust silo with a capacity of 3,700 cubic meters is also used “as a buffer,” he said.

Though it leveraged lessons learned from the ORC-biomass cogeneration project at the WUN Bioenergie facility, among the biggest challenges eta Energieberatung faced as the project manager of WUN Pellets was to fulfill all the requirements concerning structural engineering of the building, the ventilation of necessary parts, and the fire protection, Kleins said.

Another challenge concerned the tight project completion timeframe. “The main challenge was the very short schedule, since the CHP had to be running by [December 2018] due to regulatory requirements” imposed by the German Cogeneration Act of 2016, a law that provides premiums for some CHP plants during periods that they are not sufficiently profitable, he said. “Therefore, a lot of construction, installation, and planning had to be done [in] parallel and under time pressure. But thanks to the experience and the outstanding collaboration of all contributing companies and persons, we achieved our goal nearly two months in advance.”

As MWM told POWER, because it reaps all usable heat, the WUN Pellets plant has a thermal efficiency of around 47.4% and an overall efficiency of 95.5%, “an absolute top value in Germany,” it said.

Project developers, acutely aware of looming environmental requirements, are also prepared to outfit the plant with modern pollution controls, including selective catalytic reduction technology, if regulations require them in the future. And in addition to its natural gas supply, the system will be ready to process synthetic methane produced through power-to-gas initiatives that are underway in the region.

For Wunsiedel, the addition of the €30 million state-of-the-art plant has made it both a veritable pellet manufacturing center, and an important distributed energy supplier. For building a pellet factory that is dually a highly efficient gas-fired power plant that harnesses waste heat and for completing it ahead of schedule despite its uniquely engineered design, the WUN Pellet facility, already the winner of several industry accolades, is deserving of POWER’s recognition as a 2019 Top Plant. ■