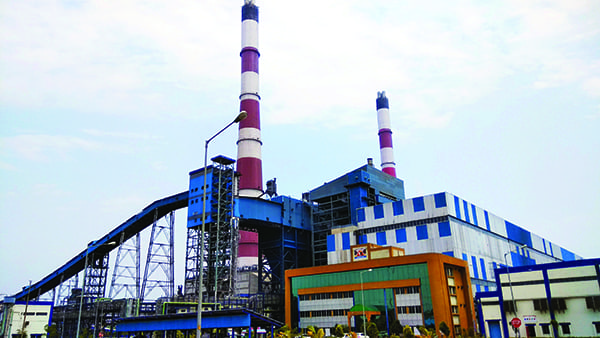 An aluminum smelter in Odisha, India, built a 900-MW coal-fired captive power plant for its own power consumption. Though the plant features new generation turbogenerator sets, it was completed on time and on budget. It has since trialed several approaches to ensure reliability, and in the process, has achieved remarkable operational milestones.

When global aluminum producer Hindalco Industries (a subsidiary of multinational conglomerate Aditya Birla group) made a decision to build its massive aluminum smelter in the eastern Indian state of Odisha, the project included a greenfield 900-MW power plant that would need to come online without delay—and on budget—to provide economical energy for the smelter’s needs and be both highly efficient and reliable.

Construction of the power project, Aditya Power, kicked off in 2010, and by the time it was completed just 36 months later—in December 2013, it had demonstrated a number of engineering marvels and technology firsts. But POWER’s recognition of this exceptional power plant as a 2018 Top Plant also includes its drive to hone operations (via lessons learned from failures experienced post-commissioning) and refine technology. The story of Aditya Power—a plant staffed by nearly 500 employees (390 of which are permanent staff)—offers an example of how important determination is for stellar performance. 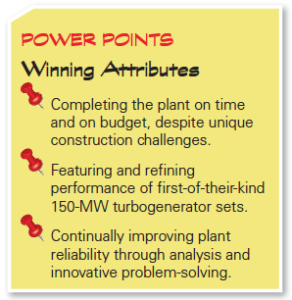 Because aluminum smelting is highly power-intensive, Aditya Aluminium’s operations would require no less than 650 MW of power capacity. To ensure adequate power, the company decided a multiunit coal-fired power plant of at least 900 MW of installed capacity was required. But to avoid unnecessary costs and delays, and to offer flexibility catering to the smelter’s consumption, Aditya Power’s developers also determined that smaller, domestically designed units would best fit its needs. In the course of bid evaluation, a proposal from Indian government-owned power generation equipment maker Bharat Heavy Electricals Ltd. (BHEL) to build six 150-MW turbogenerator sets customized from a Siemens basic design turned out to be the cheapest option.

As Susant Kumar Guru, joint president at Aditya Birla and its Captive Power Plant division head, told POWER, BHEL’s engineering prowess and its expertise of boiler and turbine technology was highly proven, which is one reason that Aditya challenged the company to design specific components that BHEL had never made before. “As well as asking them to build six 150-MW turbogenerator sets, we told them we would like air-cooled generators instead of [an] existing design of hydrogen cooled,” he said.

Aditya’s engineers, meanwhile, were grappling with the first and perhaps the most complex of the project’s challenges. Ordinary power plant construction follows a specific sequence to facilitate inputs for power distribution, turbine and generator lifting, supply of demineralized (DM) water, coal to boilers, and ash evacuation. At Aditya, “we had local site issues for which we had to adapt planning,” resulting in drastic changes in layout and design, Guru noted. To complete the project on schedule and on budget, these issues forced plant crews to first build Unit 4, followed by Units 3, 2, 1, and finally, 5 and 6. The reshuffling in turn required revising the DM water plant layout, using the cooling tower for Unit 4 in place of Unit 6’s (and requiring a piping layout rethink), as well as reorienting the fuel pump house to accommodate the storage yard and the fire water pump house.

Switchgears were also reshuffled, and project engineers customized the plant’s crushed coal system to overcome coal-feeding issues to Unit 4. Engineers also came up with innovative ways to erect the plant. For example, in lieu of the original lifting bay envisaged at Unit 1, a bay near the space designated for the boiler feed pump of the Unit 3 turbine floor remained without floor casting so it could be used for turbogenerator erection (Figure 1).

Midway through construction, India’s Pollution Control Board issued more stringent fine particulate matter emissions requirements, mandating that smokestacks be taller than 270 meters (m)—more than double the 125 m that had been planned for Aditya’s six chimneys. Engineers immediately scrambled to coordinate with equipment vendors, and through micro-planning and execution, changes were made to stack designs, switching from a single-flue system to a tri-flue system—effectively paring down the number of stacks from six to two—and reconfiguring related induced draft (ID) fan ducts, Guru said. But staff didn’t stop there. “We conducted computational fluid dynamics modeling and put [baffles] in the ducts,” which had the effect of reducing ID fan power consumption, he said.

The decision was sound, Guru said. As well as lowering the plant’s water consumption, the plant can reuse 100% of its fly ash and bottom ash as an additional revenue stream. “Due to the dry form of ash and low loss on ignition, 100% of ash is being utilized, some in road-making, some in the cement industry, and some for ash bricks or landfilling,” he said. “Another benefit of using the Magaldi system is that our boiler efficiency has increased. Normally, dry bottom ash goes out of the boiler at 900C, but in our case the bottom ash is cooled, and the hot air is again channeled into the boiler. So, we recover total heat and the bottom ash goes out at an ambient temperature.”

As construction drew to an end, Unit 4 was successfully commissioned. But Aditya’s engineers immediately noticed vibration issues pegged to discrepancies concerning the 150-MW configuration, “which was not a proven machine for Indian conditions,” Guru noted. Engineers tackled the stabilization issue “continuously for months,” he said. Eventually, through in-house modifications and reliability improvements, “the drive for gradual improvement was extended to all machines,” including boilers, turbines, water systems, and other related plant components.

Particularly noteworthy are boiler reliability improvements. Engineers, who constantly fretted over frequent tube leakages, conducted an array of tests, refining their assessments—and in some cases, generating innovative techniques through trial and error—to identify and repair weak joints. These included radiographic tests in economizers and low-temperature superheater coil tubes, cyclic hydro tests in all boilers, and thermal flow tests to pinpoint a blockage of the final superheater coil. By carrying out all these tests, the boiler ability increased, and the boiler mean time between failures—which was earlier in the range of 90 days—has increased to more than a year.

Engineers also came up with solutions to address frequent turbine trips stemming from high vibration at Unit 4. These included widening clearances between the low pressure (LP) turbine rotor and the gland box and casing fins, along with general alignment corrections. Improvements also involved resolving turbine top-to-bottom casing temperature differences and installing independent hydraulic oil systems (engineered in-house) at all units to address the nuisance of constant LP bypass valve malfunction. Aditya engineers realized the control system was unable to subscribe to the oil requirements, so they designed an original control system specifically for the LP bypass system, and that was retrofitted to the control system of the main unit.

Meanwhile, because the plant had first-of-their-kind 150-MW units, control system tuning became another key issue. That was overcome with a lot of trials, which were done through an in-house simulation. It entailed detailed study of each unit’s individual systems. Each system was then incorporated into a single system to control the overall output of the station. The result was a main control system that combines all station balance of plant, the steam generator, and turbogenerator into one distributed control system platform. “[The] reliability of [the] control system improved by eliminating all network issues related to third-party communication,” Guru said. “This has helped to maintain common inventory for entire control systems.”

Among other myriad improvements to refine general performance were efforts to ensure that governing valves on all six units were tuned to behave identically at all times; installing in-house primary air fan stall sensors; and ramping up reliability of turbine speed probes. As significantly, plant engineers also implemented measures to guard against disturbances on the Odisha state grid, to which the facility is connected via a 220-kV line for reliability.

At the beginning, tuning that system was a “nightmare,” Guru noted. “When we are islanded from the grid, it becomes difficult to manage the load with all five units running at the same time,” he explained. “If there were any issues in one of the turbines or generators of the units or in the aluminum smelter, it would lead to [a] blackout of the plant. So, we incorporated an intelligent load management system and simulated islanded conditions, including how governors would respond, and tuned it properly. Now, whenever there is any islanding, the units are sustaining,” he said. 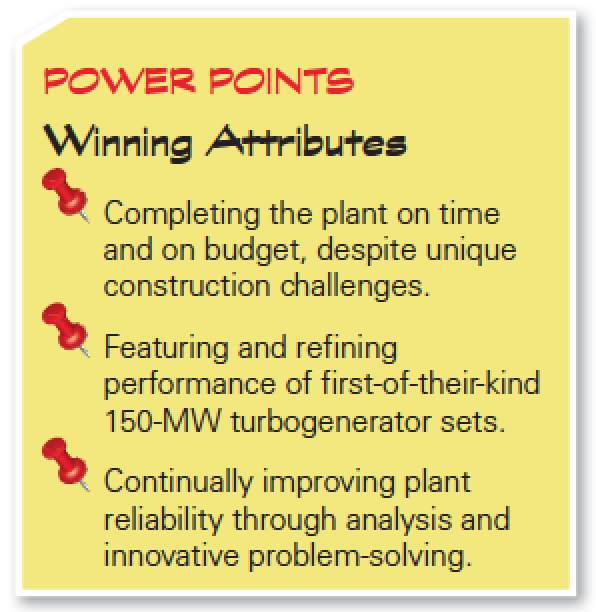 From Good to Great, and Gearing for Excellent

One of the plant’s biggest achievements is its marked heat rate improvement. “Initially, Aditya units were operating at a higher heat rate and a boiler efficiency that was 84% lower than design value. Today, while the [heat rate] design is 2,375 kcal/kWh, they are operating at 2,360 kcal/kWh. These include methodical approaches to improve the combustion process, and boiler efficiency improvements stemming from the bottom ash system installation. Improvements are ongoing,” POWER was told.

Meanwhile, though it is a captive coal power plant, one of Aditya Power’s key priorities is to promote sustainability. It has adopted a “3R” concept with three main tenets: “reduce, reuse, and recycle.” The plant currently reuses cooling tower blowdown after systematic treatment in a reverse osmosis plant. “Also, steam cycle make-up is being controlled through stringent chemical treatment, arresting leakages, HP [high-pressure] valve passing, and a zero liquid discharge drive,” Guru noted. “That means specific water consumption at Aditya Power is now 2.1 m3/MWh—much lower than the [requirement] of 2.5 m3/MWh.”

According to Guru, these are merely some of the plant’s achievements. “Its journey to excellence has started,” he said. For now at least, Aditya Power is expanding. Plant staff recently filled a low-lying area with ash produced by the plant and is mulling installing a 30-MW solar photovoltaic power plant at that site. “Now it has to see what height it can attain [in] the coming future,” he said. ■