The 600 kW/400 kWh system developed by Tokyo-based Sumitomo Corp. consists of 16 EV batteries that were recovered and inspected by the Sumitomo and Nissan Motor Co. joint venture 4R Energy Corp. Over the next three years, the system will measure the smoothing effect of energy output fluctuation from the nearby 10-MW Hikari-no-mori solar farm (Figure 4). 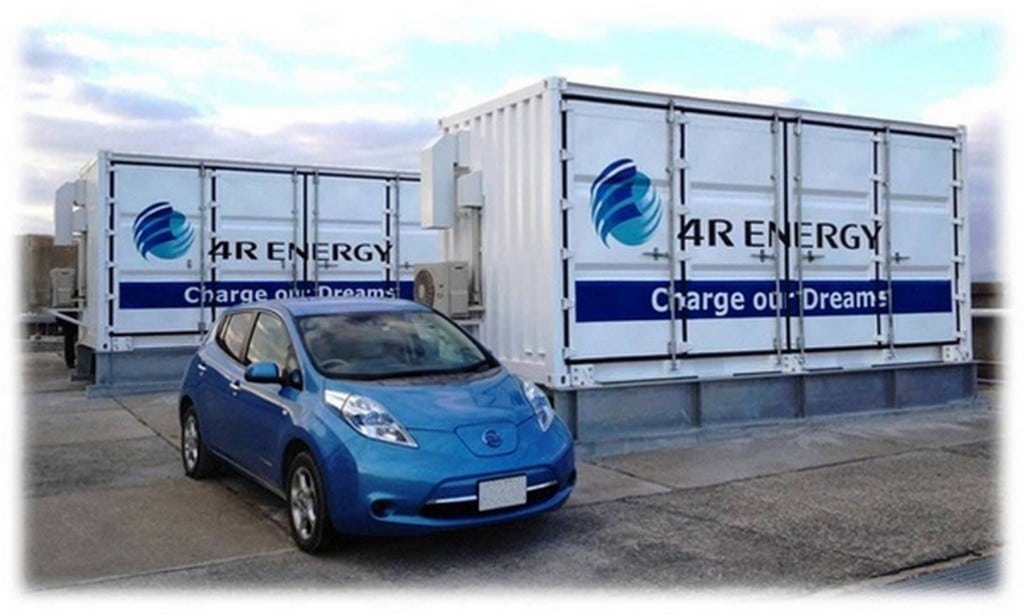 4.              EV batteries for storage. Sumitomo Corp.’s 600 kW/400 kWh system consists of 16 spent electric vehicle batteries. Over the next three years, the system will measure the smoothing effect of energy output fluctuation from the nearby 10-MW Hikari-no-mori solar farm. Courtesy: Sumitomo

That solar farm, the name of which translates to “Forest of Light,” is an interesting project in itself. Hikari-no-mori is a nine-company “corporate participation-based” endeavor that was initiated to make use of the Hokko Landfill, a disposal site for incinerated ash from general and other waste owned by the Osaka Municipal government. The companies use leases to share the costs of installing the mega-solar facility and will receive earnings from the sale of the generated electricity to the local electric power company in proportion to their shares.

Sumitomo’s focus for its new energy storage system now shifts to seeking out business opportunities that can make use of it.

Interest has been mounting in the re-use of spent EV batteries for stationary energy storage applications. Some say that the concept plays well for the future of EVs, because it increases their value proposition by giving costly batteries an afterlife. Though EVs have long been touted as near-emissions-free and therefore environmentally sound, recycling EV batteries, which use large quantities of heavy metals, rare earth elements, and toxic materials, is difficult. An EV battery with only 70% of its capacity left could still have about 10 years of useful life as a grid storage device, says John Holmes, head of technology innovation and deployment at San Diego Gas and Electric.

However, as the Public Interest Energy Research Program at University of California–Davis notes, “Little is known at the present time regarding the variability of the cell characteristics in spent batteries and how the batteries continue to age on test cycles appropriate for the second-use applications.” At the same time, not all EV batteries are equally conducive to repurposing. Other experts point out that no consensus yet exists to determine how many remaining miles a battery has, making second-life applications difficult.