Earlier this February, Siemens Power Generation’s (SPG’s) factory in Berlin delivered its 500th gas turbine. The SGT5-4000F (Figure 2), formerly called the V94.3A, is nominally rated at 270 MW and weighs in at about 300 metric tons. With this shipment, the Berlin facility can boast of having built gas turbines with a cumulative capacity of 98 gigawatts.

The turbine is destined for the 800-MW Knapsack combined-cycle power plant in Germany, which SPG is constructing at an industrial part in Koln-Hurth, near Cologne, for the Norwegian utility Statkraft. The Dutch utility Essent has already signed a 15-year power-purchase agreement for one-third of the project’s production. 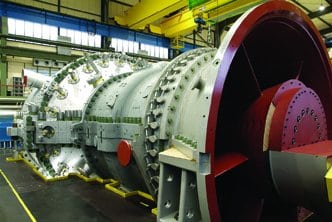 For Siemens, the contract with Statkraft includes turnkey construction of the 2 x 1 plant, including its entire electrical system, and maintenance of the gas turbine for 12 years. The plant is scheduled to be completed in the summer of 2007. The project, acquired from Intergen a year ago, is Statkraft’s second in Germany and will "considerably expand" the company’s access to its own, flexible energy production in continental Europe.

Due to their low emissions, high efficiencies, low capital costs, and rapid deployment, natural gas-fired combined-cycle plants have become a mainstay of German power generation. Another reason for the wholesale switch from coal over the past decades: By 2020, about 40,000 MW of Germany’s installed capacity will be 40 years old.