Renewable generation in the U.S. has doubled over the past 10 years. In 2018, generation from solar, wind, hydro, and other renewables soared to a record 742 TWh—or 17.6% of total U.S. generation.

According to the Energy Information Administration (EIA), since 2008—when renewables provided 382 TWh—wind generation rose from 55 TWh and generated 275 TWh (6.5% of total electricity generation) in 2018. Conventional hydropower dominated the renewables mix in 2018, retaining a slight lead over wind at 292 TWh (6.9% of total generation).

However, the EIA expects wind to surpass hydro generation over 2019. The EIA’s most recent Preliminary Monthly Electric Generator Inventory survey shows wind capacity increasing by 8.3 GW in 2018 and 8.0 GW in 2019. By the end of 2018, 94 GW of wind generating capacity was operating on the electric grid. With the exception of one 30-MW offshore wind plant located on Block Island, off the coast of Rhode Island, all that capacity was onshore. “If these new generating units come online as scheduled, they would add 9% to U.S. utility-scale wind capacity by the end of 2018 and another 8% by the end of 2019,” the agency said. 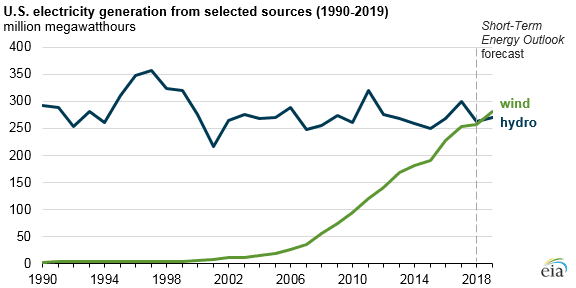 Generation from other renewable resources, including biomass and geothermal, increased from 70 million MWh to 79 million MWh in the U.S. between 2008 and 2018, and it collectively represented 1.9% of total generation in 2018, the EIA said.