On the island of Anegada in the British Virgin Islands, there is a lovely spot called "cow wreck beach," named for the cow bones that occasionally wash up on the shore. They are the result of an historical and economic anomaly. At the height of their colonial powers, the British used the island to raise cattle not for their meat, but for their bones, which were turned into buttons and bone meal. Thanks to the actions of hurricanes and the presence of a reef offshore, hundreds of years later you can still trip over the odd cow skull as you walk along the coast.

To modern minds, the history of the beach seems to predate classical economic theory, which would never suggest throwing away the most valuable part of the cow and keeping its bones. The obvious analogy can be made with today’s steam plants, where modern-day bone farmers are throwing away valuable electric power whenever they generate heat.

In virtually all modern steam plants, steam is generated, distributed, and condensed as its heat is sent to local thermal loads. To keep distribution pipes small, the steam is produced at a pressure well in excess of that at which it is used, and a series of pressure-reduction valves (PRVs) throttle this pressure back at one or more spots in the thermal network. But it took fuel energy to raise the pressure of the steam, and that energy is effectively wasted at the PRV.

The simplified schematic of the typical industrial/institutional steam plant shown in Figure 1 hints at the lost opportunity implicit in its design. To those of us in the power industry, these thermal processes look like Rankine power plants, but for the lack of a power island. Water is evaporated, high-pressure steam is reduced, and the heat from low-pressure steam is rejected to a process or radiator that is the thermodynamic equivalent of a cooling tower. Ironically, these designs are often justified for economic reasons: namely, a desire to reduce plant costs. By reducing the specific volume of the steam, these plants save money on distribution pipe.

1. Typical thermal plant design. In most steam plants, steam is over-pressurized in a boiler to save on distribution pipe costs and then throttled down to lower pressures prior to use. Throttling, though low in capital cost, is usually not economically attractive.
Source: Turbosteam Corp.

When considered solely as a steam plant, these design decisions seem to make good economic sense: slight increases in operating cost to over-pressurize steam are traded off against slight reductions in capital cost for smaller pipe. However, when seen for what they could be, these plants represent a long-term energy sink that drains the facility’s fuel budget from day one of operation. A facility that makes 600 psig steam and then throttles it to 50 psig for process use is the economic equivalent of extracting 600 psig from a steam turbine, throttling the steam to 50 psig, and then reinjecting it into the turbine’s final stages. The potential economic gains from recovering energy from antiquated design practices are significant.

However, like many black clouds, this one has a silver lining. Every steam plant with a PRV is essentially a 75%-complete Rankine power plant.

To illustrate, consider a project recently commissioned at a Kentucky wood products manufacturer. This 750-employee facility produces 45,000 lb/hr of steam at 235 psig in a wood-fired boiler and then reduces the pressure to 30 psig to provide thermal energy for six dry kilns. Prior to 2002 the factory throttled its steam through a PRV. In 2002, Turbosteam Corp. (Turner Falls, Mass.) installed a backpressure steam turbine-generator that recycles the energy that had been wasted in throttling the steam into 1 MW of power generation capacity. Since the backpressure unit was installed, for a capital cost of $500,000 ($500/kW), it has saved the manufacturer $120,000 per year in electricity costs. That this high return was achieved even at Kentucky’s low electric rates suggests that energy recycling opportunities are waiting to be discovered.

In truth, most opportunities are more complex (and more interesting) than this simple PRV-replacement example would suggest. Consider:

In all cases, the new power plant can be piggybacked onto the existing utility infrastructure, thus realizing the maximum return on the minimum capital investment (Figure 2). 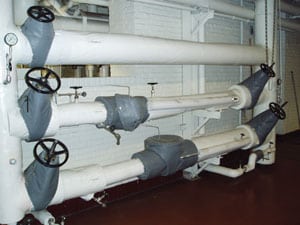 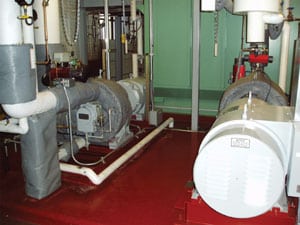 The core technologies described above all have decades of proven, in-field experience. With commercial operation dating back to 1886, backpressure turbine-generators have the lowest technical risk of any distributed generation technology. However, every steam turbine-generator that has ever been built was custom-engineered to local steam pressures, temperatures, and flows. Given this potential for near-infinite design variability, the challenge is thus not the technology but rather the design of the system and its integration into existing steam plants. Even small pressure drops (as little as 100 psi) can often be economically justified by the electric revenue they create.

The steam conditions commonly found in industrial and institutional thermal facilities correspond to power island installations with installed capital costs of $300 to $1,000/kW at sizes as small as a few hundred kW.