Industry Leaders Discuss Current and Looming Challenges
"This is the best power conference in the world." That’s not a quote from ELECTRIC POWER organizers but from this year’s keynote speaker, John Shelk, president and CEO of the Electric Power Supply Association, the trade association for competitive power suppliers who are active in the U.S. and global markets. According to Shelk, this is the best power event because the people who run the plants are all here. 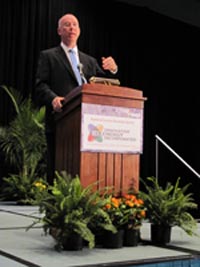 In Shelk’s view, for everyone involved in the power generation business, the next five to 10 years will be the "most momentous" in the industry’s history. The challenges ahead cut across all generation sectors and fuel types and include such issues as cybersecurity, integrating new resources, and the effects of financial reform regulations on the power industry. Then there are the "unknown unknowns," as former Secretary of Defense Donald Rumsfeld put it, which for the generation industry have included "the shale gas revolution." Nevertheless, Shelk believes that if the industry works together, those challenges can be successfully addressed.

Though they all mentioned the obvious concerns—keeping retail prices low, balancing the risks of huge capital investments against the uncertainties of what they all see as likely future carbon constraints, and coping with the latest regulations—many other concerns trace back to natural forces and their effects on the industry in the short and medium term: tornadoes, earthquakes and tsunamis, and an aging U.S. workforce. What follows is a sample of paraphrased comments on those and other issues that could point to future trends in the industry.

Beneby/CPS: Although integrated gasification combined cycle is expensive and a relatively unproven technology, Beneby thinks it could be a good choice for future generation because it "takes carbon risk off the table, and that’s big," so the investment could be worth it.

Carter/Cleco: Carter sees his company and others moving upstream to do joint ventures with fuel suppliers to hedge the volatility of fuel prices.

Fisher/TVA: Looking at load factor and load-shifting, there’s never been a better opportunity, with so many options, to balance load.

Foley/ACCIONA: The challenge of connecting renewables to the grid can be extremely difficult and take a decade or more. That’s why ACCIONE has chosen to build only what can go on a 150 kV line, to avoid dealing with costly upgrades to transmission lines.

Gillis/Exelon: In the next five to eight years, "a very large number of employees will be retirement eligible," so Exelon is doing "preemptive hiring" to ensure knowledge transition.