Celebrating Winners
Each year, ELECTRIC POWER begins with a Monday night Power Plant Awards Banquet at which we recognize and celebrate the winners of POWER magazine and Powder River Basin Coal Users’ Group (PRBCUG) award winners. The event also provides a unique opportunity to see the evidence of trends in the power generation industry.

POWER Editor-in-Chief Dr. Robert Peltier, PE, assisted by Vice President and Publisher Brian Nessen, presented the awards for 2010: Plant of the Year, Marmaduke, and Top Plants in gas, coal, and renewable categories. (For a full list of the winning plants and feature articles describing each, see the August through December 2010 issues in the archives at www.powermag.com or use the links from the Awards section of the home page.) Although there were 100 nominations for Plant of the Year (the winner was Luminant’s Oak Grove Power Plant), Peltier noted that there were more nominations in the Renewables Top Plant category than for all the other awards combined.

Among those present to receive awards was a team from Malaysia and India that accepted for the Kajang Waste-to-Energy Plant in Semenyih, Malaysia (see photo). Remember: The deadline for submitting nominations for 2011 awards is May 23.

After recognizing several key volunteer contributors to the success of the PRBCUG, as well as student scholarship winners, the 2011 PRBCUG plant winners were announced: Kansas City Power & Light’s Iatan Generating Station in the large plant category and Muscatine Power & Water in the small plant category.

The evening concluded with former U.S. Air Force captain and fighter jet pilot Scott O’Grady (photo) sharing his experience of being shot down over enemy territory in Bosnia in 1995, surviving for six days, and being rescued by a U.S. Navy unit. 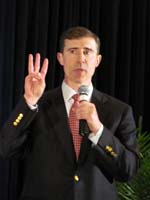