Bangladesh is set to increase the coal-based power generation capacity to ensure supply security at a time when many other countries are focussing on the development of renewables and cut dependency on thermal power to achieve climate goals. The country’s move to expand coal power comes as challenges remain for renewables development, including inadequate grid infrastructure, lack of robust policies, and incentives or subsidies except net metering which has also been only moderately successful, states GlobalData, a leading data and analytics company.

GlobalData’s latest report, “Bangladesh Power Market Size, Trends, Regulations, Competitive Landscape and Forecast, 2022-2035,” reveals that the share of coal power in the total annual generation in the country is estimated to reach 12.6% in 2032. In September 2022, the Bangladeshi government announced plans to add around 4.3 GW coal-based thermal power to address frequent blackouts, which caused a major strain on industries, especially the garment industry which accounts for over 80% of the country’s exports. 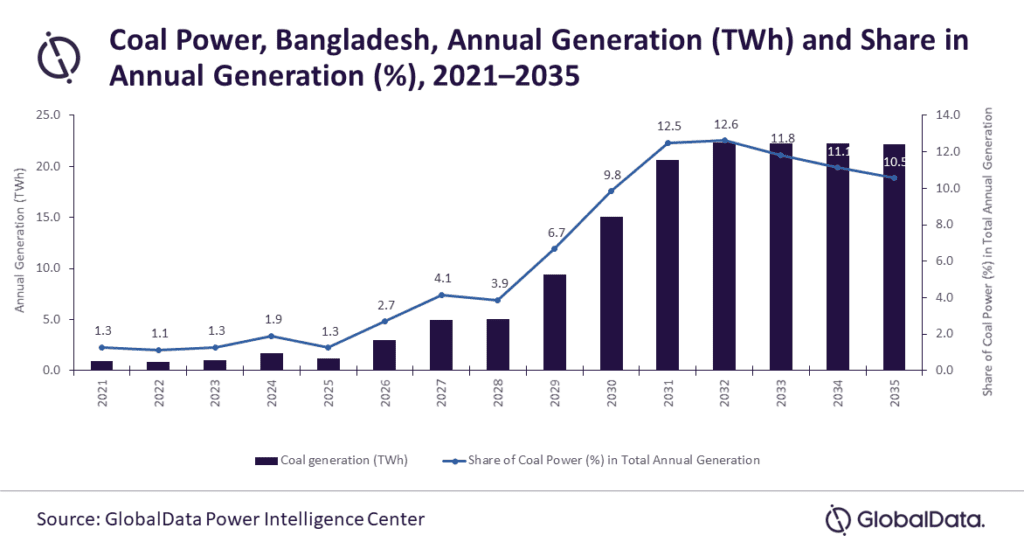 Attaurrahman Ojindaram Saibasan, Power Analyst at GlobalData, comments: “Though Bangladesh’s measures provide temporary relief to secure supply, they do not provide a long-time solution. Moreover, this steers the country away from its unconditional target to reduce GHG emissions by 27.56 Mt CO2e (6.73%) below business as usual (BAU) levels in 2030. The rise in electricity demand has led to an increase in gas-based generation over the years.”

In 2021, gas-based generation accounted for 66.4% of total annual generation. It is estimated that the country’s natural gas reserves will be depleted in 10 to 12 years based on the current usage. The increase in global energy prices makes importing natural gas an unattractive option.

Saibasan concludes: “There are no major utility scale renewable power plants in the country and the grid infrastructure is not equipped to streamline renewable power generation on a large-scale. The country’s preference towards coal-based thermal power development and imports may only be a temporary measure to overcome these challenges.

“In the long-term, the country should look at incentivizing renewable power plants to encourage adoption, invest in upgrading the grid, and focus on development of energy storage to overcome dependency on thermal power and meet its climate goals.”

About GlobalData
4,000 of the world’s largest companies, including over 70% of FTSE 100 and 60% of Fortune 100 companies, make more timely and better business decisions thanks to GlobalData’s unique data, expert analysis and innovative solutions, all in one platform. GlobalData’s mission is to help our clients decode the future to be more successful and innovative across a range of industries, including the healthcare, consumer, retail, financial, technology and professional services sectors.