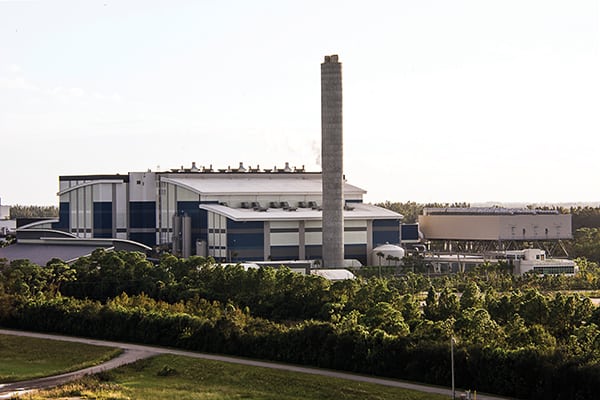 Although waste-to-energy (WTE) technology is well proven, the relatively low cost of landfilling garbage in the U.S. has foiled new power plant construction for many years. However, a facility in Florida—the first greenfield WTE project the U.S. has seen in 20 years—shows it’s still possible to utilize this often “wasted” resource.

Although WTE plants have performed very well and have been models of consistency—producing between 14.2 TWh and 15.1 TWh of combined generation every year from 2001 through 2014—challenging market conditions in the energy and waste sectors put the kibosh on new development. Today, the Energy Recovery Council reports that there are 196 units operating at 77 facilities capable of generating 2,547 MW (15 of the plants provide combined heat and power, while three simply export steam).

WTE Shines in the Sunshine State

During the growth years, Florida was a hotbed of activity. As a result, it has more WTE facilities—11—than any other state in the U.S. Although it doesn’t lead the nation in the percentage of the state’s municipal solid waste (MSW) managed by WTE facilities, Florida does have the greatest WTE capacity. Its plants are capable of handling 20,114 tons per day (t/d) of MSW, close to double the capacity of the next-highest state, New York.

Florida is also home to the newest WTE plant to enter the U.S. fleet. Palm Beach Renewable Energy Facility 2 (PBREF 2) entered commercial operation on July 18, 2015. The 95-MW plant, owned by the Solid Waste Authority (SWA) of Palm Beach County, utilizes mass burn technology in its three boilers to combust up to 3,000 t/d of post-recycled MSW. Steam from the boilers is directed to a single General Electric steam turbine generator set, with the power (net of in-house use) supplied to Florida Power and Light Co. under a long-term power purchase agreement.

The plant was designed, manufactured, and constructed by a consortium of Babcock & Wilcox (B&W) and KBR Inc. (Table 1). Located on a 24-acre site, it was the first greenfield WTE facility constructed in the U.S. since 1995.

MSW—also known as garbage—is delivered to PBREF 2 primarily by truck from six transfer stations located within Palm Beach County. The trucks use walking-floor trailers to dump the MSW on the plant’s tipping floor. Three semi-automated refuse cranes, manufactured by Konecranes, mix and manage the waste in the refuse pit. The cranes also deliver the MSW to the charging hoppers at the inlet to each of the boilers.

The beauty of mass burn technology is that the MSW does not have to be processed prior to entering the boiler. SWA also owns PBREF 1, but that plant is a refuse-derived fuel (RDF) facility. RDF is likewise produced from the combustible components of post-recycled MSW, but the waste is shredded to suitably size the material. It also passes through a series of magnetic and eddy current separation equipment to recover any remaining ferrous and nonferrous metals before it is delivered to the boiler’s combustion system. That whole process adds some cost.

The PBREF 2 boiler design includes a B&W Vølund DynaGrate pivoting combustion grate (Figure 1). The grate resembles a staircase with the grate bars—alternately placed horizontally and vertically—making up the individual steps. The grate bars are mounted on shafts, which slowly rotate 60 degrees back and forth, producing a wave-like longitudinal motion. The movement causes the fuel to mix and tumble as it slowly travels down the inclined grate, exposing fresh surface area for combustion in the process. B&W says the unique movement results in an excellent burnout of the waste fuel with less than 0.25% total organic carbon typically remaining in the ash. Hydraulic ram actuators feed the MSW onto the grate system.

PBREF 2’s furnace tubes have a total Inconel weld overlay to protect them from the corrosive flue gases found in WTE boilers. Other state-of-the-art features include a water-cooled wear zone to minimize slagging, erosion, and corrosion near the grate; minimal use of refractory, which reduces maintenance expense; and well-designed access to superheater heat transfer surfaces to facilitate replacement. The furnace is designed to permit at least two seconds of residence time above 1,800F to destroy dioxins and furans, which can be formed during the combustion of plastics in MSW. A B&W Precision Jet overfire air system helps minimize the formation of NOx and CO in the process, while post-combustion control equipment reduces other emissions. Each boiler is capable of supplying 284,400 lb/hr of steam at 900 psi and 830F to the turbine.

WTE facilities are subject to very stringent emissions standards and must employ many of the same control technologies used at other thermal power plants. PBREF 2’s emissions are continuously monitored by a B&W KVB-Enertec system. In addition to the combustion controls, the plant injects powdered activated carbon into the flue gas to control dioxin, furan, and mercury emissions. It also has a spray dryer absorber to remove acid gases—primarily sulfur dioxide and hydrogen chloride—and a pulse jet fabric filter (baghouse) to remove particulate matter.

PBREF 2 is the first WTE plant in the U.S. to have a selective catalytic reduction (SCR) system installed for NOx control. It operates a low-dust, low-temperature SCR system, installed downstream of the baghouse. Vaporized aqueous ammonia is injected through a manifold and injection grid system into the flue gases upstream of the catalyst reactor. The flue gases then pass down through ceramic catalyst blocks, where NOx is converted to nitrogen and water vapor through a reaction with the ammonia in the presence of the catalyst (chiefly made of titanium oxide). An added benefit of the SCR is that it further reduces dioxins and furans that may remain in the flue gases at that point in the process. 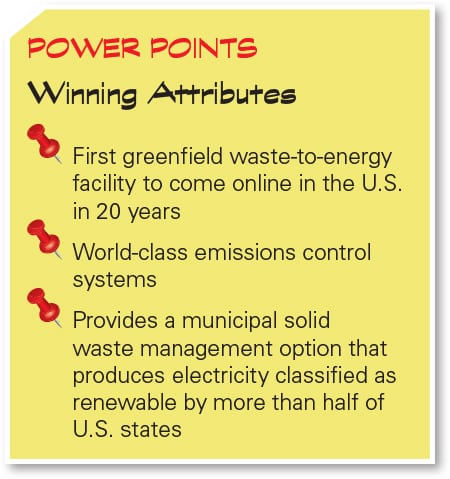 The plant’s emissions have been stellar. During plant acceptance testing conducted by an independent contractor, PBREF 2 achieved all of its permit emissions guarantees. Many of the results were an order of magnitude below the plant’s emissions limits, making it a best-in-class WTE facility. For perspective, consider that in the 1980s, before importance was placed on reducing dioxin and furan emissions, some WTE facilities had dioxin/furan emissions equivalent to more than 10,000 nanograms per dry standard cubic meter (ng/dscm). Of course, all WTE plants have been upgraded since that time, but during PBREF 2’s testing, dioxin/furan emissions were 0.21–0.36 ng/dscm, which was far better than required (its permit allows up to 10 ng/dscm).

And WTE plants are great recyclers. PBREF 2’s bottom and fly ash are conveyed to an ash management building, where a rotary magnet removes ferrous metals and an eddy current separator removes nonferrous metals from the ash stream. Around 2,000 tons of ferrous and 100 tons of nonferrous metals are recovered by the system in a typical month. The remaining ash is collected in bunkers until it can be loaded onto trucks and disposed of in a landfill.

“The completion of this state-of-the-art facility represents the culmination of a 10-year effort that virtually ensures to the taxpayers of Palm Beach County that their solid waste will be disposed of in the most efficient and environmentally sensitive method available in the world today long into the future,” Ray Schauer, director of Engineering and Public Works for SWA, said in a press release announcing the grand opening of the plant. “PBREF 2 is a jewel in the crown of SWA’s award winning Integrated Solid Waste Management System that will set the standard for performance and environmental sustainability in North America.” ■