The mere mention of the words "New Source Review" (NSR) will immediately capture the full attention of any utility executive and might cause the cancellation of even the best power plant "upgrade" project. The effects of those three words have nothing to do with project economics or whether a project increases or decreases emissions. It’s all about the lawsuits.

Over the years POWER (COAL POWER’s sister publication) has had a number of excellent utility engineer-authored coal plant efficiency-improvement articles quashed by corporate lawyers because of NSR concerns. We have even seen articles published in POWER introduced as "evidence" of upgrades that violate NSR when the most casual reading would classify them as standard O&M projects. Even having a project approved in a federal permit won’t inoculate a utility from a nasty strain of NSR years after the fact.

NSR is a very complex new plant review process developed as part of the federal Clean Air Act (CAA), which was originally passed in 1970 and amended in 1977 and 1990 to establish health-based "national ambient air quality standards" (NAAQS). Plants in service prior to 1970 did not have to meet the NSR requirements unless they were "upgraded." That word is the key instigator of all the subsequent lawsuits and politicizing of the Environmental Protection Agency’s (EPA’s) rulemaking process-a process that remains murky to this day.

CAA Is a Success Story

By any accounting, the CAA has been a success. EPA data clearly illustrate that even the most significant pollutants are on a steep decline-even while the U.S. standard of living and population continue to rise rapidly (Figure 1). Individual pollutant emissions also are on a steep decline, as shown in Table 1: NOx and SO2 emissions have been cut in half since 1980, and the recent Clean Air Interstate Rule will continue to reduce those emissions even further in coming years. 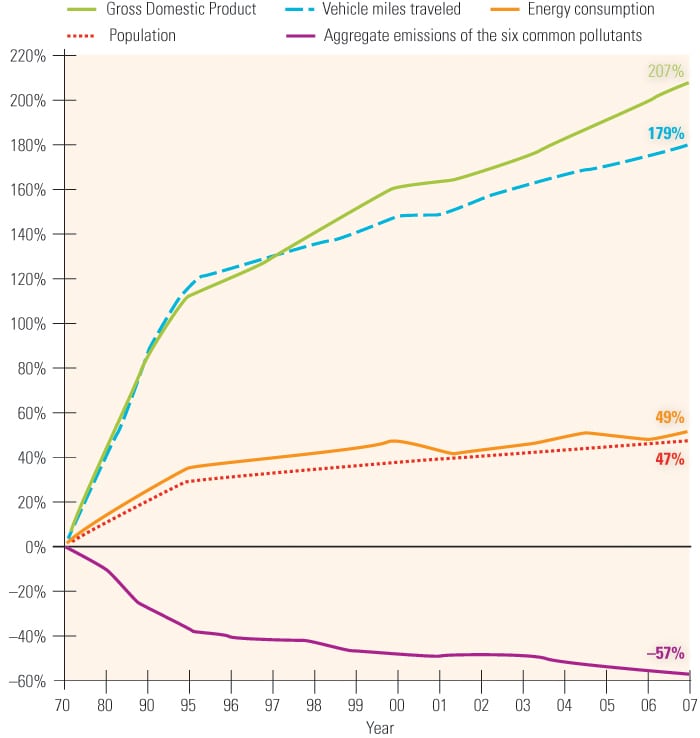 1. Significant emissions improvements have been enjoyed by the U.S. since the 1970 Clean Air Act became law, especially when viewed against other significant national statistics. Source: EPA

Utilities are a victim of their own success in bringing these emissions numbers down (although not willingly, in many cases). Having seen what can be done, environmental activists exert pressure for more and faster reductions and oppose new coal plant construction. Yet rising population and gross domestic product trends place additional demands on the electricity grid. Unable to build new plants, utility executives have turned to upgrading and extending the life of aging coal plants that the framers of the original CAA thought would be extinct in a few years. Not so, as most of the plants operating in 1970 continue to generate power.

The NSR process, created by the CAA, requires developers of new power plants to undergo a project design review to ensure that the appropriate emissions controls are used for the power generation technology selected for the project. Also, if existing plants are to be modified by making what are called “non-routine” physical changes, or if the plant changes its operating profile in a way that results in a significant increase in emissions, then the NSR process kicks in. The problem faced by utilities seeking to keep older power plant assets operating is defining the term “routine” and thereby the precise point when NSR comes into play.

NSR Used as a Weapon

By December 2000, the U.S. Department of Justice had filed lawsuits against eight utilities (covering a total of 106 power plants) for violations of NSR by not securing a permit for modifications made to those plants. Prior to these lawsuits, the standard followed by the industry was "massive" and "unprecedented" replacement work that was clearly "non-routine," as defined in a 1990 court ruling.

A clear understanding of what NSR means to new and operating power plants today is difficult considering the number of court battles have been fought on this issue all the way to the Supreme Court. Virtually all of the original lawsuits were negotiated away; each of the large utilities agreed to install billions of dollars of emissions-reducing equipment as part of their settlement. Those settlements may have ended many of the court battles, but the uncertainty of NSR still hangs over plant operations.

Eric L Hiser of the law firm of Jorden Bischoff & Hiser in Scottsdale, Ariz., presented an overview of the lessons that should be learned from the experiences of the largest three utilities involved in these original lawsuits at the May 2008 ELECTRIC POWER Conference. Download a PDF of his PowerPoint presentation, "Implications for Plant Projects and Maintenance after New York, Cinergy, and Duke Energy," and use it to assess your O&M practices in light of the most recent legal interpretations of NSR and to determine what steps should be taken to ensure that you stay out of NSR territory on new projects. A little paranoia about NSR might just be prudent.