The near-simultaneous surge in U.S. natural gas production and recent enactment of environmental regulations will usher U.S. power supply from reliance on coal to increased usage of natural gas and renewables (see Figure 1).

U.S. natural gas production began a now decade-long period of growth around 2005, driven by shale gas discoveries and improved drilling technologies. Production steadily rose over that period from below 50 Bcf/d to above 70 Bcf/d (see Figure 2). 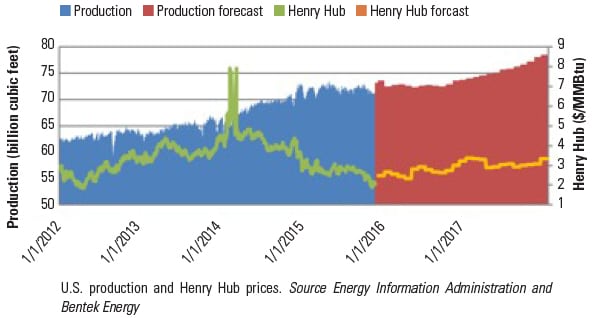 This abundance of supply has pushed prices to historic lows below $2/MMBtu, which has increased the fuel’s competitiveness for power generation. The trend will likely continue next year, with Bentek Energy forecasting production near 80 Bcf/d by the end of 2017.

If not scuttled by legislative or legal attacks, new U.S. environmental regulations will be another factor that continues to steer generation away from coal toward natural gas, and also renewables.

Under the Environmental Protection Agency’s (EPA’s) Clean Power Plan (CPP), states must develop plans for achieving interim carbon reduction goals by 2022 and final goals targeting a 32% drop from 2005 levels in the existing generation fleet’s carbon emissions by 2030. Efforts opposing this landmark regulation are seen largely as symbolic, as the White House is certain to veto any legislation attacking the CPP or other elements of President Barack Obama’s climate strategy, and the GOP lacks the votes to override a presidential veto.

The Obama administration’s regulations have already begun to drive a re-composition of the country’s generation mix as states and utilities prepare for the CPP deadlines, but the removal of coal-fired power supply has not increased prices, as many feared; rather, the decline of natural gas prices has dragged electricity markets to historic lows.

Nowhere has this been truer than the Northeast. In the past two years, the region has had over 16 GW of generation retire, which is more than half of total U.S. retirements. Over two-thirds of that lost capacity was coal-fired. Meanwhile, only 4.3 GW of new capacity went online, most of which was natural gas–fired. Rather than power prices rising—as the net capacity loss might suggest—the combination of natural gas’ price decline and the increasing share of that fuel in the generation stack contributed to a collapse in prices.

Year-to-date average on-peak, day-ahead locational marginal pricing in the region’s three independent system operators—PJM, ISO New England, and NYISO—was down over 30% from the same period last year through mid-November. That trend continued in November with PJM Eastern Hub on-peak, for instance, down 46% month to date.

Low natural gas prices are softening the impact of coal retirements for electricity consumers, but merchant generators leveraged to wholesale markets are struggling to maintain earnings and cash flow as hedges roll off.

Exelon, which owns the nation’s largest nuclear fleet, has lost almost a quarter of its market capitalization this year. With less than half of 2017 generation hedged as of the end of the third quarter, earnings expectations have declined with the drop in forward power prices.

In some cases, low power prices have even prompted the arguably premature retirement of significant former-baseload generation. In late 2015, Entergy announced the impending retirement of the 728-MW Pilgrim nuclear plant in Plymouth, Mass., and the 838-MW Fitzpatrick facility in upstate New York because of mounting losses from operating the facilities.

These retirements are yet another factor that will drive up natural gas’s share of the generation stack. In 2010, the U.S. generated just 23% of its power with natural gas. In 2015, that number could end up above one-third.

State renewables plans and tax credits have driven more wind and solar projects. The former will supply about 4% of the nation’s power in 2015, up from 2% in 2010, and will continue to grow as about 3 GW of projects under construction come online over the next two years.

Coal’s share of generation is down to 34% from 45% in 2010. Retirements have been a factor, but so has the 13 percentage point drop in capacity factors for the U.S. coal fleet over the last six years. Whether utilization of the remaining coal fleet ramps back up will largely be a function of natural gas prices. Record levels of that fuel in storage will cap prices near term, but a longer-term recovery to $3/MMBtu or higher would cause power supply to shift back to coal. ■