Since it won its independence from the UK in 1971, the United Arab Emirates (UAE) has leveraged its large oil and natural gas resources to bolster a booming economy and to support its financial and trading importance in the Middle East and around the world. Though the federation of seven emirates on the Arabian Peninsula that is tucked at the convergence of the Gulf of Oman and the Persian Gulf appears diminutive in size compared its much-larger neighbors Saudi Arabia and Oman, it is today one of the wealthiest nations in the world. Yet to cement its robust economic future, the country is direly lacking in two critical components: power and water.

Along with the solid growth of energy-intensive industries like aluminum, cement, fertilizers, and agriculture, the region’s population has increased 7.7% annually since 2014. According to the UAE State of Energy Report 2017 released in June 2017, electricity consumption—already high owing to a historically installed highly subsidized electricity tariff structure—is projected to grow by 7% to 10% annually over 2014–2020, about 2,435 GWh per year.

The country depends on natural gas for 98% of its power generation today. All gas was produced domestically until 2008, when demand outstripped supply and forced the UAE to begin liquefied natural gas imports. Despite efforts to diversify its power profile, over the short term at least, thermal technologies will continue to dominate the country’s generation mix. The reason, many experts say, is because the UAE is one of the world’s top 10 most water-scarce countries—and it gets 90% of its water from desalination of seawater, mostly from the highly saline Arabian Gulf. Of nearly 29 GW of power generation installed in the UAE today, 24.9 GW is tied to desalination, the King Abdullah Petroleum Studies and Research Center suggested in an October 2017 report. The UAE Ministry of Energy is currently working to finalize the 2036 Water Security Strategy, but for now, it appears that the country will remain reliant on efforts to boost investment in integrated power and water projects, as was pioneered by Abu Dhabi nearly three decades ago. 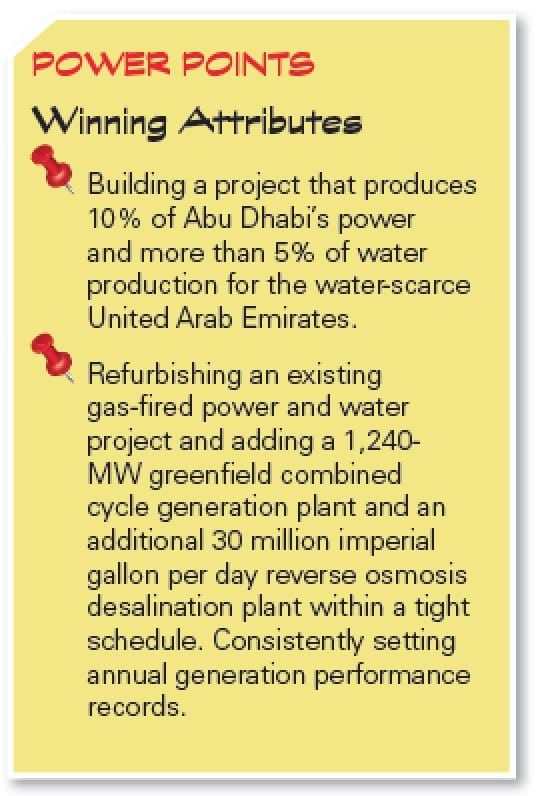 Since Abu Dhabi, one of the UAE’s largest emirates, moved to privatize the Taweelah A plant and set up an independent water and power plant (IWPP) contract to rehabilitate and expand the existing facility in 1998, several similar projects have been built in it and other emirates. French energy giant ENGIE (formerly known as SUEZ and GDF SUEZ) has been involved in development and construction of IWPP projects in the region since that initial project. The company told POWER it was involved in negotiations between engineering firm Tractabel (which later became an ENGIE subsidiary) and its state-run owner, Abu Dhabi Water and Electricity Authority (ADWEA), for a part of Taweelah A1, which came online in 2003. Today, ENGIE’s total gross portfolio in Gulf Cooperation Council countries and around the world has surged to 30 GW of power and more than 1,200 million imperial gallons per day (MIGD) of water desalination.

The company was a prequalified bidder for ADWEA’s request in 2013 for an IWPP project that would acquire and refurbish the Al Mirfa Power Co.’s existing 22.5-MIGD, 360-MW project (comprising four GE 9E gas turbines) and add a new 1,240-MW greenfield combined cycle generation plant, as well as an additional 30-MIGD reverse osmosis (RO) desalination plant to the site. After ENGIE won the bid, terms of the Mirfa IWPP were ironed out: ADWEA would hold 60% of the project, as specified by Abu Dhabi rules; ENGIE would hold 20%; and Abu Dhabi Financial Group, the remaining 20%. The IWPP structure also required a lump-sum, date-certain turnkey contract with an engineering, procurement, and construction (EPC) firm or group. That undertaking was handed to a consortium of Hyundai Engineering & Construction and Italian firm Ansaldo Energia. Ansaldo also supplied three AE94.3A gas turbines—twin-fuel Class F turbines that don’t require water injection—two MT20 steam turbines, five air-cooled turbogenerator sets, and auxiliary systems. The consortium also selected the SUEZ Group (via Degrémont, a subsidiary of the group at that time), to build the $144.7 million (in 2014) RO plant.

Construction of the $1.5 billion project kicked off in October 2014, and the project began full operation in November 2017. For ENGIE, the biggest challenge it faced was integrating—against a tight schedule—the greenfield and brownfield projects and all associated equipment, all while absorbing personnel from the plant’s previous owner and training them to operate the new project.

According to Ansaldo, which acted as technical field advisor (TFA) in partnership with Hyundai in what it said was an “unusual contractual arrangement,” the project required intensive coordination of everyday activities with the consortium leader and specialists in various fields to tackle issues during the tight commissioning schedule. Stefano Bruno, Mirfa TFA coordinator, pointed out that the massive and complex project was built over a “very ambitious timetable” with a multiethnic and multilingual workforce of engineers and workers (representing eight different nationalities) in extreme atmospheric conditions, “including peaks of over 50C heat in summer.”

Ansaldo also noted that the materials procurement and handling was an enormous effort. By the end of work, more than “21,000 [cubic meters] of materials weighing over 6,600,000 [kilograms of goods] had been shipped” aboard 42 ships under “free-on-board” shipping terms, which meant Ansaldo accepted responsibility for the goods being shipped once they left the suppliers’ shipping docks. The ships plied a route that runs through some high-risk areas. “It is no coincidence that big cargo ships navigate with their responders turned off between Jeddah and the Gulf of Aden,” it noted. “[W]e could breathe a sigh of relief as each ship arrived.”

The Promise of Desalination

Building the project also presented challenges to SUEZ, which erected the greenfield 30-MIGD RO facility within two years, mainly for cooling purposes. One issue involved site security and accessibility, such as restrictions on taking photographs, which meant the team had to find creative solutions to communicate issues to suppliers, as Jean-Luc Alexandre, deputy CEO of SUEZ Treatment Infrastructure, told POWER.

The Mirfa site already had a 22.5-MIGD facility that uses multi-stage flash (MSF) system technology. The thermal process, which essentially distills seawater by flashing it to steam via concurrent heat exchangers, is suited to the high salinity of the Arabian Gulf, its temperature, and levels of organic matter—but it is five times more energy-intensive than RO. As Alexandre explained, RO is an advanced desalination technology that uses a water-permeable membrane “as a kind of filter” to separate dissolved salts in permeate (the liquid flowing through the membrane) using a pressure differential between the feedwater and product water. While MSF and RO both use about the same amount of electrical energy per cubic meter of water desalinated, RO does not require additional energy for heat, which is why it is considered far more energy-efficient.

Mirfa’s RO plant (Figure 1) is equipped with a two-pass system to clarify the characteristically turbid and algae-rich water from the Arabian Gulf, Alexandre said. First, it uses SUEZ’s SeaDaf filtration technology, which is an air flotation system designed to allow treatment of a large volume of water. While SUEZ’s system is more compact than conventional flotation systems, it offers high circulation velocities and improved coalescence and adhesion of bubbles and flocs. A patented, perforated floor system promotes formation of a bubble blanket. In the next stage, it employs SUEZ’s SeaClean dual-media filtration technology (using anthracite and sand), mainly to improve the performance, cut water losses, and increase the lifespan of the RO membranes. “To be sure that the membrane will be reliable, you need to filter as much as possible,” he said.

SUEZ, which has built, equipped, and operated 255 made-to-measure desalination plants—and operates plants that produce 2 million cubic meters per day of desalinated water—all over the world, is confident that desalination for power will thrive. “We’ve seen a tremendous increase in the market for the last 15 years,” Alexandre said. One reason is that, owing to increased competition, costs for desalination have fallen drastically over the past five to 10 years. Technology, too, has taken a moderate leap. “Almost 45% of the cost relates to the energy you need to desalinate. Where we have seen the biggest improvement is toward the reduction of the energy needed toward the membrane and on the energy recovery.”

For now, the “emphasis remains on water reliability,” especially at a power plant, but looking forward, research and innovation promises to make efforts even more efficient, he said. For example, even as demand for water grows and more players enter the desalination market, the conversion rate from saltwater to freshwater has continued to hover at about 50%, depending on the water temperature and salinity. SUEZ is working to boost the conversion rate to between 75% and 80%, a development that is certain to change the outlook for water-scarce regions like the UAE. ■