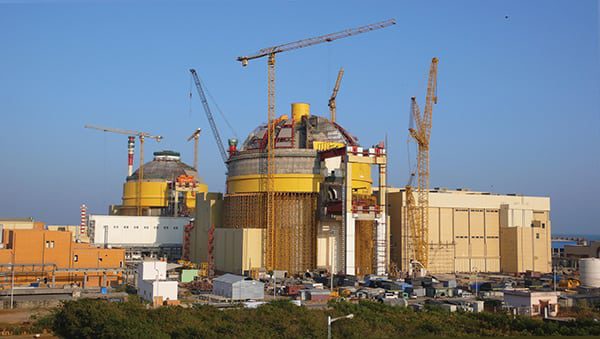 Think your nuclear plant faced delays and obstacles? India’s Kudankulam project, Unit 1 of which begins commercial operation this month, spent 26 years in development and construction and faced down obstacles that included a seven-month blockade by protesters to become the nation’s largest nuclear plant.

There are power plant projects that seem to drag on forever, and India’s Kudankulam Atomic Power Project is a prime example. So why give it an award? Just one reason is the number of challenges it overcame: Development work on Unit 1, which begins commercial operation this month, commenced in 1988, but the project survived the collapse of the Soviet Union, international sanctions, interminable legal obstacles, and local protests that at times descended into riots. The Kudankulam complex also is notable for being the first modern reactor built in India using foreign technology.

Between 1974, when it tested an atomic bomb, and 2008, India was barred from the international nuclear trade by the Nuclear Non-proliferation Treaty, to which it is not a signatory. The Indian nuclear test led to the formation of the Nuclear Suppliers Group (NSG), a multinational body comprising most of the world’s nuclear powers, which was set up to control the international trade in nuclear technology, both military and civilian.

Barred as it was from foreign assistance, India was forced to develop an entirely indigenous nuclear power sector. The two exceptions were the two-unit Tarapur complex built by General Electric in 1969 and the two-unit CANDU complex at Rajasthan, which began construction in the early 1970s; both plants have been run on uranium imported under International Atomic Energy Agency (IAEA) supervision.

India’s 16 other reactors were indigenously designed pressurized heavy-water reactors (PHWR). India’s limited reserves of uranium meant continual fuel supply problems for its indigenous plants. Thus, it has had to develop fuel reprocessing technology, as well as a longer-term plan to employ its large reserves of thorium—roughly 13% of the world’s known thorium reserves are in India—to power its fleet.

The difficulties in developing significant nuclear generation—all but one of India’s indigenous reactors are 202 MWe or less in capacity—meant it continued to search for ways to work around the international sanctions. One such initiative was the genesis of Kudankulam.

In November 1988, then-Prime Minister Rajiv Gandhi and Soviet Premier Mikhail Gorbachev signed an agreement to provide a turnkey two-unit plant in Tamil Nadu state using Soviet VVER reactor technology. The USSR would supply both the plant and the fuel, which would be returned when spent.

But the project faced immediate geopolitical roadblocks, as the USSR in 1988 was already starting to come apart at the seams. The following year saw Eastern European nations under Soviet domination assert their independence, and in 1991, the USSR itself disintegrated. Though the Russian Federation assumed the USSR’s role under the Kudankulam agreement, the economic crisis that plagued Russia through the 1990s—its economy would shrink 50% between 1990 and 1995—meant its ability to continue development was severely handicapped. A dispute between Russia and India over how Kudankulam would be paid for also delayed further progress. A 1992 revision to the NSG agreement caused further troubles, as the U.S. would assert that the project did not comply with the new rules. Various Indian officials would declare the project dead during this period.

But the Kudankulam project would flare back into life under some of the most unlikely of circumstances. Tensions between India and Pakistan during 1998 led to a series of competing nuclear tests, actions that led to widespread international condemnation and sanctions.

Yet within a month, Russia moved to revitalize the Kudankulam plan with a new agreement, signed in June 1998. Under this deal, Russia’s state-owned nuclear firm Atomstroyexport would supply design and engineering for two 1,000-MWe VVER-1000 pressurized light water reactors, with the Nuclear Power Corp. of India (NPCI) overseeing all construction. The deal would cost Rs13,171 crore (later revised to Rs17,270 crore, about $2.8 billion), with Russia providing a long-term Rs6,416 crore credit facility. The new agreement also gave India the right to reprocess spent fuel, thus far the only Atomstroyexport customer to secure such a provision.

Construction, led by Larsen & Toubro, India’s largest construction firm, began in March 2002 (Figure 1). Unlike similar Atomstroyexport projects, only a handful of Russian engineers worked on site; nearly all of the work was performed by Indian firms and engineers. Initially, all signs were that it would be completed ahead of the planned December 2007 date for first start. Progress remained ahead of schedule through 2004. To support construction and make delivery of heavy components easier, a dedicated port was completed near the site in early 2004 to allow large equipment to be delivered directly by barge from ships anchored nearby.

But this fast start was not to be sustained.

The first problems came in delays in delivery of engineering and components from Russia, and problems with plans that were delivered. This caused construction to slow, and eventually fall years behind schedule. Most major construction on Unit 1 was finally completed in 2010, and testing could begin, with dummy fuel being loaded in July. Soon after, the project ran into other, more serious roadblocks—literally.

Despite endemic power shortages in Tamil Nadu state, opposition to the plant began to grow as completion approached. The People’s Movement Against Nuclear Energy (PMANE), a coalition of villagers and fishermen from the surrounding area, began agitating against the plant in 2011 after the March disaster at the Fukushima Daiichi plant in Japan. (The Tamil Nadu coastline sustained damage from the 2004 Indian Ocean tsunami, prompting fears of a Fukushima-style disaster should such an event recur.)

In September, with first fuel loading scheduled for that fall and first criticality set for December, the PMANE began blockading the entrance to the site. On Sept. 22, the Tamil Nadu State Cabinet passed a resolution demanding that all work be halted until local concerns about the plant’s safety could be addressed.

Between September and the following March, PMANE protesters allowed no more than 50 workers per shift to enter the plant, making normal operations impossible. The protesters at times numbered in the thousands.

The PMANE protests were undercut the following spring by an electricity crisis in Tamil Nadu stemming from a 4-GW shortfall in generation. Facing widespread blackouts, the cabinet reversed its previous resolution against the plant and instead called for startup as soon as possible. Litigation against the plant, however, continued, despite a Supreme Court ruling in September 2012 that declined to block loading of the nuclear fuel.

At the same time, protests against the plant intensified, at times turning violent and requiring thousands of riot police to protect the site. The litigation against the plant was not resolved until May 2013, when the Supreme Court finally dismissed the case. Still, the delays, both from protests and construction problems, likely increased the cost of the project by around $1 billion, according to Ravi Krishnan, an expert on the Indian electricity sector who spoke to POWER about the project. (NPCI declined to participate in the preparation of this article.)

First criticality for Unit 1 was achieved in July 2013. Low-power testing continued over the following months, with the unit finally achieving 100% power for the first time on June 9. Full commercial operations are scheduled to start this month.

Testing of Unit 2 is under way, with operations scheduled for next year. But if India and Russia have their way, these will be only the first two of at least six—and possibly eight—reactors at the Kudankulam site to be supplied by Atomstroyexport, and as many as 20 across the entire nation.

An agreement on the third and fourth reactors was signed in April 2014, for a reported cost of Rs33,000 crores ($5.5 billion). That agreement was delayed because of problems in conforming it to India’s 2010 Civil Liability for Nuclear Damage Act, which gives NPCI the right to demand compensation from a plant’s supplier should an accident be caused by defective equipment.

The potentially open-ended liability this creates has frustrated foreign nuclear firms trying to do business in India despite a 2008 agreement with the NSG that opened the country to the international nuclear trade. Negotiations between India and Russia’s Rosatom—which took four years—produced a framework allowing the deal to proceed. So far, Russia is the only country to reach such an agreement, under which India’s public-sector General Insurance Co. will evaluate each component of the reactors and come up with a 20-year insurance premium it will charge to cover potential liability. The price of the new reactors is intended to reflect this new approach.

Observers are not certain these ambitious plans will bear fruit, as “issues unique to India’s governance, judicial system, and politics can delay the widespread deployment of nuclear technology,” said Krishnan. Still, the success of Kudankulam is reason for optimism, in a nation whose power sector is in dire need of it. ■