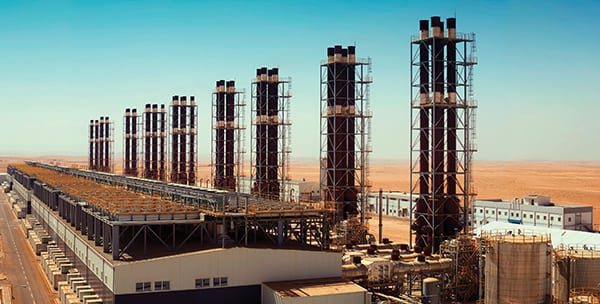 For many people, when the topic of peaking power plants arises, gas turbines come to mind. But as this world record–holding plant demonstrates, there are several reasons, including fuel flexibility and grid-supporting capabilities, that you may want to consider internal combustion engine technology to capture peaks and more.

Sharing borders with Saudi Arabia, Israel, Syria, and Iraq, Jordan sits in a very precarious part of the world. To make matters worse, the country’s economy is among the smallest in the Middle East. Chronic high rates of poverty, unemployment, inflation, and a large budget deficit have resulted in a challenging situation for its government, which must rely heavily on foreign assistance.

The country is also handicapped by very limited water supplies and natural resources. According to The World Bank Group, the average annual rainfall in Jordan is only about 4 inches, with less than 0.1 inch of that received from June 1 through September 30. Unlike some other nations in the region, Jordan is not flush with oil and must import virtually all of its energy needs.

Further exacerbating the situation, Jordan has had to deal with an influx of refugees escaping civil war in Syria. In July 2015, the United Nations Refugee Agency estimated that more than 4 million Syrians had fled the country, of which 629,128 were said to be in Jordan, which has a little more than 7 million people of its own.

In 2011, Jordan faced an energy crisis when the Arab Spring—a series of anti-government protests, riots, and armed rebellions—spread across the Middle East, resulting in attacks on Egyptian natural gas pipelines, which cut off the fuel for 80% of Jordan’s power generation. Those events led the National Electric Power Co. of Jordan (NEPCO) to seek a grid-stabilizing independent power plant (IPP) in an effort to reduce its dependency on Egyptian natural gas.

Fuel flexibility was important. Having the ability to source liquefied natural gas (LNG) from anywhere in the world or burn fuel oil, if necessary, was seen as a way to help provide the energy security Jordan desired. Wärtsilä offered what it believed was the best option, but it faced a challenge. Upma Koul, business development manager for Wärtsilä, explained that a common attitude among decision makers around the globe is that combined cycle gas turbines are the preeminent power plant technology.

“The biggest challenge we face is to change the mindset,” Koul told POWER. “To break the mindset, we have to show the value of our solution and how the country could benefit from it.”

To do that, Wärtsilä performed a grid study. The company then demonstrated how its power plant could be integrated into the grid system and how it would allow existing power plants to operate at higher load factors, which would in turn allow them to run at higher efficiencies. When all factors were considered, the results showed that implementing Wärtsilä’s solution would decrease fuel consumption on the grid without affecting the operation and maintenance of the system.

More impressive than the size of the plant, though, is its flexibility. The engines can be run on three different fuels—natural gas, light fuel oil, or heavy fuel oil (HFO)—and have the ability to change fuels on the fly, even while operating at load. By design, output is the same regardless of the fuel used.

“The readiness to use different fuels was essential for us, and Wärtsilä’s engines are the optimal technology for this,” said Taemin Kim, administration manager of AAEPC.

The engines operate on the lean-burn principle. Lean combustion enables a high compression ratio, which in turn increases engine efficiency, reduces peak temperatures, and therefore also reduces NOx emissions. The engines are reported to operate at up to 47.3% electrical efficiency in open cycle mode.

The benefit to the local power grid is provided by the plant’s load-following capability. Koul noted that combined cycle gas turbines operate much more efficiently at high loads; efficiency is greatly reduced when they are forced to cycle. However, Wärtsilä’s internal combustion engine technology is ideally suited for variable conditions (Figure 1). For a given total plant load, you simply operate as many individual generating sets as required at their optimal efficiency.

Both the gas admission and pilot fuel injection are electronically controlled. In addition, the engine functions are controlled by an advanced automation system (Figure 2) that allows optimal running conditions to be set, independent of the ambient conditions or fuel type. Wärtsilä’s “Smart Power Generation” is said to combine the features of fuel flexibility, operational flexibility, and high efficiency to provide a sustainable, reliable, and affordable energy infrastructure.

Although the entire project took only 24 months to construct following receipt of the Limited Notice to Proceed, circumstances have changed dramatically since planning began. The price of oil has decreased considerably, and the availability of natural gas is currently very limited in Jordan. For that reason, the plant is not only running on HFO, but it is also being used essentially as a baseload unit.

“They are running 80% of the time, but they are still doing the load following. They are still stopping at night and starting up in the morning to meet the load demand,” Koul said.

Koul mentioned that Jordan has a contract with Royal Dutch Shell to supply LNG, so when gas is available the plant will switch fuels. Although HFO remains cheaper than LNG, the plant must operate a de-NOx system when using HFO, which is not required with the cleaner-burning gas, so the total operating cost for LNG is less.

The plant is also designed to support future power needs. Jordan has grand plans for its renewable energy sector. The country is seeking to get 10% of its power from renewables by 2020, with capacity targets of 600 MW of solar and 1,200 MW of wind. IPP3 offers the fast-reacting backup capacity needed to balance these variable sources.

Speaking during IPP3’s inauguration ceremony on April 29, 2015, Prime Minister Abdullah Ensour said, “This 573-MW peaking power plant is an important component of the government’s strategy to meet growing demand, and in addition to providing vital peak power capacity, the project prepares the grid for future deployment of large quantities of intermittent renewable energy.”

“The stakeholders in Jordan are extremely happy with the plant because they see this plant as being able to mitigate the disturbances caused by renewables in the system,” Koul said. It’s not a new concept. Within the past 10 years, Wärtsilä has supplied several power plants throughout the world dedicated to wind power balancing, including in the U.S.

The fact that the plant uses virtually no water is also a big benefit for the arid country. The engines have closed circuit cooling systems with adequately sized radiators to accommodate the temperatures experienced in Amman, which are rarely above 97F.

Jordan’s environmental policies required some modification prior to construction of the plant, and Wärtsilä worked with the Electricity Regulatory Commission to ensure International Finance Corp. guidelines were adopted. There were also some concerns aired by lenders about Jordan’s location. Although it is in the midst of a lot of turmoil, the country has been able to maintain reasonable stability. The World Bank forecasts Jordan’s gross domestic product growth rate will be 3.5% this year, 3.9% in 2016, and 4.0% in 2017. In the end, investor concerns were allayed, the project was able to move forward, and the results have more than met expectations.