When construction kicked off in September 2009 at the 2,340-MW Haiyang nuclear power plant in eastern China’s Shandong province, the milestone was widely heralded as a crucial achievement on many fronts. The news was another notch for the global nuclear industry, which was in the midst of a new-build revival that some had dubbed the “nuclear renaissance.” For U.S.-based Westinghouse Electric, it marked another tangible opportunity to showcase its AP1000 reactor, a third-generation light water reactor outfitted with an advanced passive safety system whose design the U.S. Nuclear Regulatory Commission had certified in 2005. The Haiyang construction-start milestone closely followed pouring of first concrete at the Sanmen plant in Zhejiang province—Westinghouse’s first AP1000 project worldwide. The nuclear technology giant had bagged both projects in a $5.3 billion framework agreement that it signed in February 2007 with China’s State Nuclear Power Technology Corp. (SNPTC) that foresaw the completion of four AP1000 Sanmen and Haiyang reactors by 2014—following a mere five-year construction period.

For China, the milestone was a beacon that illuminated its vast ambitions to expand its nuclear power fleet. In 2009, China only had 11 operational nuclear power reactors—three that used domestic technologies, two were Russian technology, four were French technologies, and the remainder are Canadian-designed. It now operates 50 units—a combined 50 GW.

At the time, China was intent on fast-tracking its nuclear expansion through a plan that prioritized domestic sourcing of major components and development of domestic nuclear reactor technology. Echoing similar agreements the country had sealed with major global nuclear technology vendors, SNPTC’s agreement with Westinghouse involved a major technology transfer agreement. One aspect involved collaboratively refining the AP1000 and developing a larger reactor based on the Westinghouse design, the “CAP1400,” for domestic use and export. For SNTPC, which in 2015 merged with China Power Investment Corp. to establish the State Power Investment Corp. (SPIC), building and operating Haiyang was the first crucial step.

But building Haiyang—as with Sanmen—was ultimately ridden with hurdles. The project, stricken first by the global economic crisis and then a cautious environment following the Fukushima accident, suffered significant delays. Unit 1 began commercial operation in October 2018, and Unit 2 in January 2019—nine years after construction formally kicked off.

Both Sanmen and Haiyang also suffered substantial cost overruns that were mainly pegged to design changes and project delays. The “overspending” also reflected equipment prices, the Fukushima accident response, and an adjustment to import tax policies. According to 2018 cost estimates from China’s National Nuclear Safety Administration, Haiyang’s construction amounted to RMB 40 billion ($6.2 billion), while Sanmen’s Phase 1 amounted to RMB 25 billion ($3.9 billion). POWER was unable to confirm these figures or explain the discrepancy.

“During [Haiyang’s] construction, SPIC [adhered] to the principles of ‘safety first, quality first,’ firmly implementing every procedure strictly, and overcoming difficulties in cooperation with other parties,” SPIC said. Given international scrutiny, and particularly the UK’s 2010-raised issues about the design’s modular construction methodology, China’s Nuclear Safety Administration doubled down on requirements and supervision of the project’s construction, nuclear safety, design modifications, and key equipment testing, it said.

According to the China Nuclear Energy Association (CNEC), SPIC and regulators placed a concerted focus on core components that enable the AP1000’s advanced passive safety system, including the shielded motor main pump and blasting valve, which had never before applied to a pressurized water reactor (PWR). “During the test of the main pump, the thrust disc, thrust bearing, impeller and other components, as well as the sealing technology of the blasting valve, all encountered new technical challenges and manufacturing engineering problems. The qualification test lasted about five years to complete,” it said. SPIC added that if a problem was discovered, fixes were repeatedly reviewed, and when approved and implemented, they were reviewed again.

However, the CNEC, a trade group representing all facets of growing China’s nuclear industry, also suggested the close supervision by the government over the project owner worked to the project’s ultimate benefit because it satisfied the nation’s stringent requirements in a timely way. That stands in contrast to the four AP1000 projects begun in the U.S. in 2012 at Vogtle 3 and 4 in Georgia and V.C. Summer 2 and 3 in South Carolina, it said. A major issue underscoring the U.S. projects’ delays and cost overruns (and eventual abandonment at V.C. Summer) was related to project management rather than technical design flaws, CNEC suggested. In China, the technology transfer contract with Westinghouse—which gave state-owned entities the “right to receive any design optimization and modification”—also provided some crucial flexibility to address post-Fukushima response measures and uniquely design their projects to meet first-of-a-kind challenges, the group suggested.

While Haiyang’s overall development plan calls for four more 1-GW reactors to be built at the site (and it has space for two others), the plant has more recently distinguished itself for a set of remarkable projects that would expand its relevance and revenue. Shortly after the plant began commercial operation, SPIC subsidiary Shandong Nuclear Power Co. (SDNPC), Haiyang’s owner and operator, and Tsinghua University began exploring using extracted steam and residual heat from its nuclear units to simultaneously generate district heat and desalinated water.

In November 2019, the plant executed Phase 1 of the unique cogeneration project, providing heat to a 700,000-square-meter area around the plant, including its employee dormitory and some residential areas in Haiyang, a coastal city in Shandong province, eastern China, that has a population of about 658,000. Phase 2 of the project will expand the heating area by 4,500,000 square meters and is envisioned to provide “full coverage” to the urban area of Haiyang City. Phase 2 began construction in November 2020, and completion is expected during the 2021 winter season.

As Wu Fang, SDNPC chairman, recently explained, a PWR essentially generates heat. That heat is then transferred to the secondary circuit through the steam generator to produce steam, which eventually drives a steam turbine unit to generate power. The steam is then cooled, condensed, and returned to the feedwater circuit. But the steam exiting the turbine can also be used for heat supply, he said.

At the Haiyang plant, non-radioactive steam from the secondary circuit of both units is fed through an onsite multi-stage heat exchanger before going offsite to a heat exchange station run by a local thermal company (Figure 1). The heated water then flows through municipal heating pipes to consumers. “In the whole process, there are actually two major steps: steam heats water and then water heats water. There is no direct contact between the nuclear power plant and heating users. Multiple isolation barriers have been set up. Only heat is transferred, without water exchange. What the users do come into contact with is the safe hot water that has been isolated layer by layer,” he said.

During Phase 1 operation, the two Haiyang units continue to operate “safely and stably,” Fang said. “A comprehensive and in-depth safety analysis showed that after nuclear power steam extraction heating, the turbine generator set and other systems and equipment can still operate normally within the allowed scope of the original design.” However, after Phase 2 begins operating, the power generating capacity of the units will decrease, though “the cycle thermal efficiency of the nuclear power plant will be increased by 3.25%. Therefore, the heating has no effect on the performance of the reactor,” he said.

Plans are meanwhile underway to expand the heating project for integration of a large-scale system that could produce up to 8,400 tons per day of seawater desalination, providing another crucial resource to Shandong and Jiaodong Peninsula, which is a severely water-deficient region. In May 2021, SDNPC said the system demonstrated production of fresh water at a temperature of 95C. The process involves a two-stage reverse osmosis and evaporation system that utilizes heat generated by the plant. 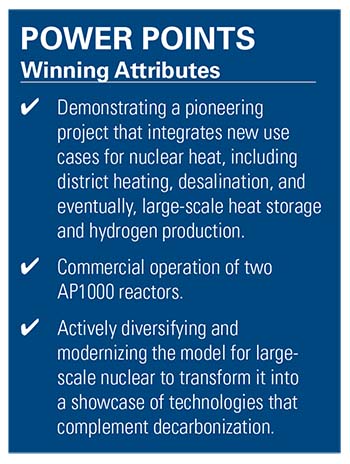 As envisioned, the phased “Shandong Haiyang Nuclear Energy Heating Project” could provide 300–400 terajoules of heat per year and produce 30 million tonnes of fresh water. In addition to steam extraction for heating and desalination, SDNPC is also exploring a more “comprehensive utilization” of Haiyang that could include a large-scale 500-MWh heat storage system (via heating storage tanks) and hydrogen production by electrolysis. SDNPC has said its ultimate goal is to transform Haiyang away from a competitive asset into a complementary one that addresses decarbonization and resource challenges.

The heating project alone could translate to an “annual savings of about 6.62 million tons of standard coal,” it said. The company projects that by 2030, Haiyang and other “clean energy heating methods” could replace all coal-fired boilers on the Jiaodong Peninsula. The project, a model for nuclear diversification, has already grown into a hallmark of the nation’s energy security strategy, it said, noting that several Chinese nuclear generators are considering similar projects.