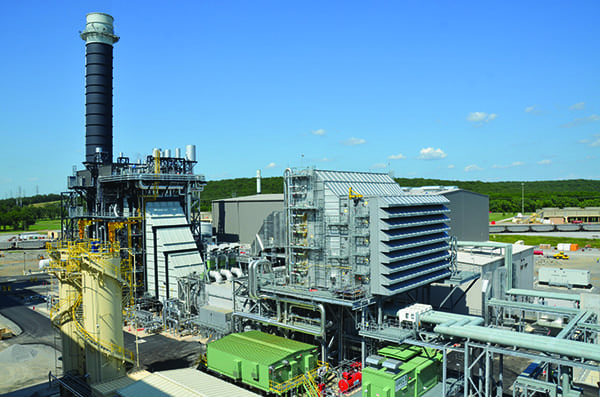 Unit 3 at the Grand River Energy Center in Chouteau, Oklahoma, was the Grand River Dam Authority’s first construction project in 30 years. Yet, the team put this distinct project—one of the largest and most efficient in the U.S.—online as planned, despite natural and technical challenges. For that and other reasons, it is a worthy 2017 Top Plant award winner.

The Grand River Dam Authority (GRDA), a non-appropriated agency founded by the Oklahoma Legislature in 1935, has sought in recent years to diversify its power generating portfolio to ensure it can continue to reliably supply power to some portion of 75 of the state’s 77 counties—including its direct customers, which include municipalities, a host of electric cooperatives, and 80 industrial and commercial customers that are primarily clustered in northeast Oklahoma.

Earlier this decade, as a bevy of coal generators reassessed the economic viability of their assets in the face of new, stricter federal environmental rules governing coal plant emissions, GRDA opted to discontinue use of coal at Unit 1 at its Grand River Energy Center (GREC)—a 1,010-MW dual-unit coal-fired facility located in Chouteau, Oklahoma—rather than install substantial upgrades needed to meet the Environmental Protection Agency’s (EPA’s) Mercury and Air Toxics Standards (MATS). In part to support that decision, GRDA’s board of directors in 2013 approved a strategic plan to achieve a more balanced portfolio. “A key objective was to rely less on coal, and to maximize use of abundant wind and hydro generation,” the agency told POWER in August. “However, wind and hydro are intermittent and maintaining reliability 24/7 is challenging.”

After considering its options, GRDA determined that adding a new advanced-class combined cycle unit would offer customers the best long-term value when integrated into its existing portfolio. However, the project came with a challenging condition: Because the MATS rule required the 1978-built 490-MW GREC Unit 1 to discontinue coal use by April 2017, the new gas-fired Unit 3 would need to come online before the 2017 summer peak period to avoid crippling power shortages. 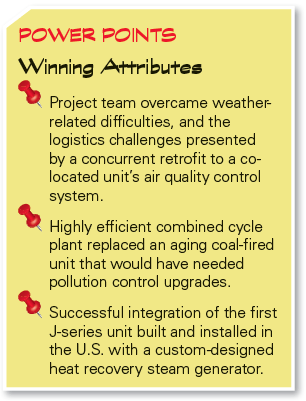 Swiftly kicking off the process, GRDA immediately contracted Black & Veatch to provide its technical expertise as owner’s engineer. After evaluating competitive proposals from an assortment of highly qualified bidders, the agency in January 2014 chose to equip the plant with a state-of-the-art 495-MW Mitsubishi Hitachi Power Systems (MHPS) M501J gas turbine (Figure 1)—a technology never before installed in North America, but which is renowned for its high-firing temperatures (inlet temperatures hover at about 1,600C or 2,912F) and its large capacity.

At the time, MHPS had installed nine M501J 60-Hz turbines around the world, accumulating more than 28,000 hours of operation. MHPS’s key selling point was the machine’s efficiency. “At baseload, the M501J will provide over 61% combined cycle efficiency. In addition, at 50% output, you’re still above 55% combined cycle efficiency,” an executive from Mitsubishi Hitachi Power Systems Americas said in a press release describing the contract signing with GRDA on March 21, 2014.

For GRDA, the decision was rooted in the technology’s “superior efficiency,” but also “proven reliability, initial cost, and overall long term value to GRDA customers.” Financial viability was a key consideration, it said. “The new combined cycle unit would need to have lowest operating cost for a combined cycle unit in the Southwest Power Pool. Therefore, a very strong design effort was made to maximize sustained efficiency and capability. This included the use of [an] inlet air chilling system and built-in redundancy appropriate for a long-term utility grade unit.”

To maximize efficiency and reliability, GRDA chose to couple the J-series gas turbine with a heat recovery steam generator (HRSG) that was custom-designed by Nooter/Eriksen. The triple-pressure, reheat-designed HRSG includes duct-firing along with advanced emission control technology. The St. Louis–headquartered company “worked very closely with design engineers to integrate the HRSG into the overall design,” GRDA said.

By December 2014, GRDA had finalized the key engineering, procurement, and construction (EPC) contract with Kiewit subsidiary The Industrial Company (TIC). The agency broke ground on the project on January 23, 2015, marking the first time in more than three decades that GRDA had begun construction on a new power project.

Project developers had anticipated some technical challenges associated with integration of the first-of-its-kind combustion turbine and the HRSG. “These challenges were overcome by assignment and commitment of the best ‘A team’ experts from each project partner,” GRDA explained. The challenges it couldn’t anticipate, however, involved a double whammy by “Mother Earth.”

All proceeded as planned until July 2016, when Unit 2 suffered a severe lightning strike that caused catastrophic fire damage to its turbine generator. The event forced GRDA to take the critical 520-MW unit offline, heightening the agency’s worries about how to provide regional reliability when Unit 1 would be unavailable due to the MATS in April 2017. “Restoration required 13 months of heroic efforts by GRDA, Siemens, and General Electric,” GRDA said.

Around the same time—and adding to its tense situation—prolonged rainfall in southern Louisiana resulted in unprecedented flooding, a declared state of emergency that delayed delivery of major components to the Unit 3 project and threatened to derail it. GRDA, which only six months earlier had faced a similar deluge of rainfall that had pushed lake levels at Grand Lake and Lake Hudson to historic levels and forced it to manage some of the largest floodwater releases since construction of its Pensacola Dam in 1940, watched the situation with some dismay.

When the components finally arrived months later, teams regrouped and formed a detailed critical path plans to compensate for the delays. That planning paid off, and though “night work was done when required,” the plant was synchronized to the grid by March 2017.

Still, fearing more unseen debacles, and citing a possible imminent shortage of generation resources in its service area, GRDA urged the U.S. Department of Energy (DOE) to issue an emergency order allowing it to combust coal at Unit 1 as required by the Southwest Power Pool between April 16, 2017, and July 15, 2017, when Unit 3 was expected to be operational. The DOE granted the request under the Federal Power Act—only the seventh time it has done so—to secure power reliability, triggering the so-called “reliability valve” that had been widely discussed since the EPA’s MATS rule was still in the draft stage. Although kept available, Unit 1 was “utilized very little during this period,” GRDA said.

Meanwhile, under pressure to stay on schedule, crews at GREC kept working to finish the project. Sellable power status was achieved just two months later on April 27, 2017, less than 45 days after first fire. That milestone was followed by extensive performance testing, and the new unit is now being dispatched into the Southwest Power Pool.

According to GRDA, efficiency goals are being met. “Thermal efficiency exceeding 60% has been demonstrated during summertime generation,” it said. Charles Barney, an engineer who serves as GRDA’s assistant general manager for fuel and generation projects, added: “We’re excited that Unit 3 responds quickly to load changes while maintaining high efficiency.”

Safety and Cooperation Is Paramount

When asked about the project’s most-winning aspect, GRDA pointed to its stellar project team. “At the onset of the project, a team mission statement was developed that included objectives to achieve a new standard for efficiency—and that no one would get hurt,” the agency said. TIC/Kiewit led regular project teambuilding sessions to keep the project on track. More significantly, it noted: “Construction team members achieved an incredible safety record of over 1.2 million man-hours worked without a serious injury.”

GRDA also credited MHPS for “first class” support during construction and commissioning, and Nooter/Eriksen for its close collaboration. Hitachi HVB, it added, provided the transformers that have performed flawlessly and were delivered ahead of schedule, and Enable Midstream Partners “provided a new gas pipeline to fuel the new unit, ahead of schedule and under budget.” For Jammie Burrow, chief engineer at GREC, the achievement cannot be underscored enough: “We had a schedule to meet that some said couldn’t be done, but we needed to have this unit running for summer of 2017. We’ve achieved that!” ■