Abating the emissions of power plants is a very hot topic these days. So it’s not surprising that people are coming up with innovative ways to not only cut emissions but also make money from them.

The latest brainstorm comes from—where else—the Massachusetts Institute of Technology, where Moshe Alamaro, an atmospheric scientist, has come up with a scheme that routes just the right amount of a power plant’s waste heat and CO2 emissions into a greenhouse to improve its productivity. The result: more and tastier hothouse tomatoes and other crops (Figure 5). 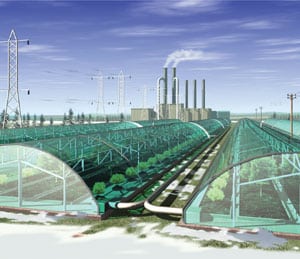 5. Hot crops. An artist’s rendering of a greenhouse complex made more productive by an adjacent power plant’s waste heat and CO2 output.

Specifically, Alamaro wants to re-route the flue gas from combined-cycle gas turbine power plants rich in CO2 to greenhouses built right next door. According to Alamaro, the burning of 1 cubic foot of gas produces roughly 0.15 pound of CO2. Meanwhile, the waste heat can be used to grow warm-weather crops in cold climates. What’s more, Alamaro claims, a steady supply of cheap, direct-from-the-source electricity could be used for artificial lighting—a requirement for growing crops during winter days with feeble sunlight.

The idea is such a good one that Calpine Corp. (San Jose, Calif.) has provided Alamaro’s company—Greenhouse Corp. of America (GCA) of Newton, Mass.—with engineering in-kind in anticipation of a pilot greenhouse being built near one of the IPP’s 90 power plants.

The idea, while good, is not new. There are already a few greenhouses in the U.S., the UK, Germany, and the Netherlands that are attached to power plants. One particularly successful project is at E.ON Benelux’s 220-MW RoCa3 combined-cycle power plant near Rotterdam. Some of the hot flue gases from the turbine are enriched with CO2 and then compressed and piped to the garden region north of Rotterdam. The exhaust heat and CO2 from the power station improve the region’s yield of locally grown crops for the people of Rotterdam.

Asked about the Dutch system, Alamaro responded that transporting CO2 and hot gases long distances isn’t necessarily profitable. By contrast, his design calls for the construction of greenhouses right next to plants on buffer land that otherwise would remain vacant. If all goes as planned, GCA hopes to develop with Calpine a 20-acre greenhouse pilot at an estimated cost of $10 million. Alamaro hopes to build more than 2,000 acres of greenhouses over the next eight years in various locations around the U.S.