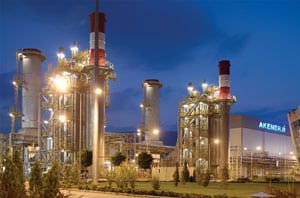 Performance testing of the plant was completed successfully in early November 2005, and Turkish Ministry of Energy and National Resources tests were wrapped up a week later. Among the items tested were:

The two Frame 6Cs were operated commercially in simple-cycle mode during commissioning and had accumulated 5,500 operating hours as of December 8. The debut followed comprehensive design validation testing of the machine, which is equipped with more than 2,300 pieces of special instrumentation.

Introduced in 2003, the Frame 6C builds on the experience and performance of GE’s Frame 6B technology, which now sports more than 40 million hours of service. Like the 6B, the 6C uses a gearbox to produce electricity on both 50- and 60-Hz grids. The new machine duplicates the fuel flexibility, reliability/availability, and maintenance features of GE’s F technology GTs, which have accumulated 14 million fired hours worldwide.

"We are extremely pleased with all of the test results for the new 6C gas turbine. Performance exceeded our test criteria," said William Cooney, general manager of GE Energy’s Thermal Product Line. "This machine represents the flowback of a new technology platform into the 40-MW class."

"Efficiency has become the key driver for profitability in high-fuel-price, competitive markets, and the 6C is an ideal fit for midsize applications in such situations," said Akenerji’s general manager, Onder Karaduman. "We will be considering the 6C for our future plants as well."

According to Cooney, the Frame 6C features a 5% improvement in simple-cycle efficiency over the 6B. In combined-cycle mode, where it is optimized for recovery of exhaust-gas heat through a lateral exhaust, the 6C is said to be 54% efficient. Although the Kemalpasa-Izmir plant is permitted to emit 25 ppm of NOx, the Frame 6C can put out as little as 15 ppm of NOx—and 9 ppm CO (dry)—in baseload operation at up to 50% of its load rating.

Cooney says that this plant is one of many projects GE has won in Turkey. To date, 32 of the company’s gas turbines have been installed or ordered there.